Inchgarvie (occasionally "Inch Garvie") is a small, uninhabited island of West Lothian in the Firth of Forth, midway between the coasts of West Lothian and Fife. Its name most likely comes from a lost Gaelic original, Innis Garbhach which would mean "rough island". Local tradition has it that the island takes its name from the young herring, or "garvies" which sheltered in large shoals around its shores.

Although now uninhabited, Inchgarvie has been inhabited throughout various periods of history. The first recorded time was in the late 15th century.

Like nearby Inchmickery, its profile and colour makes it look very much like a battleship from a distance. 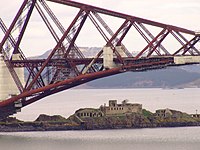 Inchgarvie beneath the Forth Bridge

Inchgarvie’s fortifications pre-date the modern period. In the days when boats were the only way to cross the Firth of Forth, the island was on the main route between North Queensferry in Fife and South Queensferry in West Lothian, which made it strategically important. The island stood close also to two Roman forts, at Cramond and at Kinneil at the end of the Antonine Wall.

Records of Danish attacks on nearby islands, particularly Inchcolm as well as Fife and Lothian may mean that it was used in some capacity by them. It may well also have had a Culdee hermit like Inchcolm and Inchmickery. Whatever the case, it has had a castle, or fortification on it, from the Middle Ages to the present day, although it is currently abandoned.

King James IV had a castle built on Inchgarvie for defensive purposes. The King licensed the owner, John Dundas of Dundas, to construct the castle on 20 March 1491.[1]

In 1497, the island was (along with Inchkeith, a few miles away) used as an isolated refuge for victims of the 'Grandgore', (syphilis) in Edinburgh.[2] The 'grandgor' was recognised in the 1497 Minutes of the Town Council of Edinborough (Phil. Trans. XLII. 421) "This contagious sickness callit the Grandgor.". The Grandgore Act was passed in September 1497, causing Inchgarvie, as well as other islands in the Firth, such as Inchkeith, to be made a place of Compulsory Retirement for people suffering from this disease.[3] They were told to board a ship at Leith and, "there to remain till God provide for their health".

On 8 March 1514 Margaret, the widow of William Dundas of Dundas, undertook to manage the completion of the fortress that James IV and her father-in-law had begun building on her island.[4] From 23 December 1514, Charles Dennison, Captain of Inchgarvie managed and fed a large royal construction team. Margaret, Lady of Dundas gave them two boats. Two 'serpentine' guns and guns from Colstone were placed on the island after a visit by artillery experts in July 1515.[5] Between 1519 and 1671, the island was the site of a prison within the castle, and James Garvie, in his Old and New Edinburgh, says of Inchgarvie that "In 1580, Inchkeith, with Inchgarvie, was made a place of exile for the plague-stricken by order of the Privy Council".[6]

In 1547, after the Battle of Pinkie Cleugh in Midlothian, Inchcolm and Inchkeith were fortified by the English, and held for two years; it is possible that Inchgarvie was fortified at this period too. On 6 September 1627, the Laird of Dundas was invited to meet the Privy Council at South Queensferry and discuss building a modern fort on the island.[7] Like Inchkeith, Inchgarvie had a quarantine hospital, and a prison. Oliver Cromwell had this demolished.

During the reign of King Charles II the island was subject to continued maintenance for defensive purposes. The island was inspected by Charles in 1651 before falling into disrepair after his army was defeated by Oliver Cromwell at the Battle of Worcester.

In 1707 the island is known to have been rented to Archibald Primrose, 1st Earl of Rosebery. In 1779, however, the island's fortifications were renewed once more, in response to the threat posed by John Paul Jones, the American Naval Commander, who harassed British ships from a base in the Forth.[8] These fortifications were never used in anger.

In 1878 the foundations for Thomas Bouch's Forth Bridge were laid on Inchgarvie (and their bricks remain)[1], but after the Tay Bridge Disaster, these plans were abandoned, and the island languished until the west end of the island was extended with a pier, and used as the foundation for one of the Forth Bridge's cantilevers. The island, due to its proximity to the bridge, was also used as a construction office for the bridge, as well as accommodation for its workers within the re-roofed castle buildings. Some of the stone from the former castle was used to help build the caissons of the Forth Bridge.

The island became of renewed importance to the security of the Firth of Forth during the First and Second World Wars, during which, in combination with fortifications on Inchcolm, and gun emplacements on the mainland to the north (at North Queensferry) and to the south (at Dalmeny), it became a primary defence against air and submarine attacks on the Forth Rail Bridge and the Rosyth Dockyard. The gun emplacements were permanently manned throughout war.

It was used as a location in the 2000 film version of Iain Banks' book Complicity (1993), (directed by Gavin Millar).

Inchgarvie is used in the riddle, "How many inches is the Forth?", playing on a pun on 'Inch' (Innis) an old Gaelic word for island which appears in the name of a number of the wee isles in the firth.