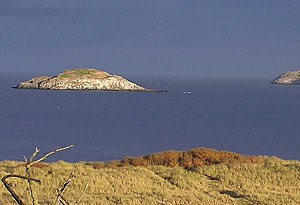 The Lamb, sometimes called Lamb Island or just Lamb, is a small island of East Lothian, approximately 100 yards long by 50 yards wide, uninhabited and lying in the Firth of Forth between the islands of Fidra and Craigleith.

The Lamb can be reached by boat from North Berwick, although there are no landing facilities and little to attract visitors when compared to Fidra and the Bass Rock.

The Lamb is flanked by two "sheep dogs" - North and South Dog Islands, which are just small skerries.

Like the other islands off North Berwick, the Lamb is a result of ancient volcanic activity, millions of years ago.

The Lamb was previously owned, with North and South Dog Islands by the Brazilian Camilo Agasim-Pereira (Baron of Dirleton and Fulwood). On 11 February 2009, the island was bought by the Israeli showman Uri Geller, who claimed that he believes that it hides Egyptian Treasure,[1] for £30,000.[2][3]