Mousa is a small island in Shetland, uninhabited since the nineteenth century. The island is known for the Broch of Mousa, an Iron Age round tower, and is designated as a Special Protection Area for storm-petrel breeding colonies.

Its name is from Old Norse, Mosey, meaning "moss island".[1]

Mousa lies a mile off the east coast of Mainland, Shetland about 15 miles south of Lerwick. Almost divided in two by inlets, East and West Hams, the island is a mile and a half long and almost a mile in maximum width. Geologically beds of hard sandstone alternate with muddy limestones that weather to produce fertile soil. A quarry provided flagstones for Lerwick.[1]

Mousa’s fertile soil supports a rich diversity of plants, including sheep’s-bit and creeping willow in the herb-rich grassland, despite the wind, salt spray and grazing by sheep.[2] 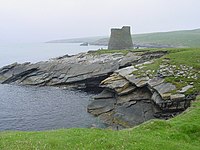 A misty day at Mousa Broch 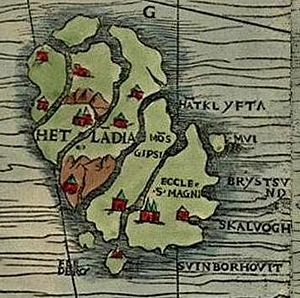 Mousa Broch is the best preserved Iron Age fortification in the British Isles.[3] It is a round tower built 2,000 years ago and above a rocky shoreline, one of a pair of brochs guarding Mousa Sound. They may be part of a chain of brochs in this part of Shetland, visible from each other as beacons. The other of the "pair", at Burland on Mainland is far less well preserved. Many brochs were the focus of a settlement, but there has never been a full archaeological investigation to confirm this at Mousa. The broch was cleared out in 1860 and 1919.

Mousa has survived intact to such a height and is thought to never have been much higher than it is today. It escaped stone gathering for nearby stone walls and croft houses (now ruined).[4]

Mousa is mentioned in the Orkneyinga Saga as being used as a place of defence during invasions, as well as a lovers' hideout.

The entrance passage into Mousa is long, reflecting the enormous thickness of its walls[5]. At its base the broch is 15m in diameter, but the interior is only 6m in diameter. Within the huge thickness of the base of the walls are a range of chambers probably used for storage, while at higher levels passages run between the inner and outer skins of the wall. On the inside a steep flight of steps leads to the top of the wall. Half way up is a landing which probably gave access to an upper level of the interior of the broch, built on a ledge running around the circumference of the interior.[4] 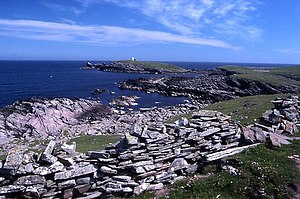 The east coast of Mousa towards the Peerie Bard

Mousa is known for grey and common seals, guillemots, Arctic terns and storm-petrels.[6]

Mousa holds c.6,800 breeding pairs of European storm-petrels in total. This represents about 8% of the British population and 2.6% of the world population.[7][8] The island has been designated a Special Protection Area[9] and is run as a reserve by the RSPB.[6]

Storm petrels may also be found at the reserve of Haaf Gruney.

The island is readily accessed using the passenger-only ferry which operates from the Mainland at Leebitton, Sandwick in summer time.