Inchcolm is an island in the Firth of Forth belonging to Fife. The name of the isle is from the Gaelic "Innis Choluim", meaning Columba's Island, as it was the site of early heritages and later a monastery inspired by St Columba.

Inchcolm has a strategic position in the Firth and was repeatedly raided by each side during the old wars between Scotland and England. In modern times it was fortified during both World Wars to defend nearby Edinburgh.

Inchcolm is at peace now and attracts visitors to its former Augustine Abbey.

An aerial shot of Inchcolm

Inchcolm lies in the Firth of Forth off the south coast of Fife opposite Braefoot Bay, east of the Forth Bridge, south of Aberdour, Fife, and north of the City of Edinburgh. It is separated from the Fife mainland by a stretch of water known as Mortimer's Deep.[1] The island forms part of the parish of Aberdour, and lies a quarter of a mile from the shore. In the days before the Forth was bridged and all traffic was by ferry, the island was a great deal less isolated as it was on the ferry routes between Midlothian and Fife.

The island can be broadly divided into three sections: the east, where its military defensive operations were centred during the Second World War, the lower central part, with the small natural harbour and shop, and a larger western end. Between Aberdour and Inchcolm is the channel called "Mortimer's Deep". It is believed that this was named after William de Mortimer.[2] 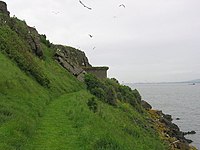 Inchcolm was anciently known as ‘’Emona’’, ‘’Aemonia’’ or ‘’Innis Choluim’’, the latter giving today’s name. It may have been used by the Roman fleet in some capacity, as they had a strong presence at Cramond for a few years.

The island was supposedly visited by St Columba, the Irish missionary monk, in 567, and was named after him in the 12th century. It may have served the monks of the Columban order as an "Iona of the east" from early times. A primitive stone-roofed building survived on the island, preserved and given a vaulted roof by the monks of the later abbey, probably served as a hermit's oratory and cell in the 12th century, if not earlier. Fragments of carved stonework from the Dark Ages testify to an early Christian presence on the island. A hogback stone, preserved in the abbey's visitor centre, can be dated to the late 10th century, very early for a Danish / Norse monument of this sort in Britain.

A 16th century source states that a stone cross was situated nearby, although no features could be found which related to the monument.

The island is mentioned in Shakespeare's Macbeth

That now Sweno, the Norwayes King,
Craves composition:
Nor would we deigne him buriall of his men,
Till he disbursed, at Saint Colmes ynch,
Ten thousand Dollars, to our generall use

The reference in Macbeth hints at Inchcolm’s long use as an exclusive burial site, much like Iona, Columba’s own island. In ‘’Macbeth’’ the defeated Norwegians are not specifically said to bury their dead on the island, but it is believed that it was an honoured place to lay the bones of the dead. The practice of burying dead on islands in the Highlands is long established, partly so that feral dogs might not dig the corpses up.

Like other centres of Culdee activity, the island was used as a home for hermits. The nearby Inchmickery’s name also commemorates a probable hermit. Textual evidence suggests that this was the case in the 12th century, when King Alexander I was marooned on the island, and was said to have been looked after by one in 1123. Alexander decided to make the island the site of an Augustinian monastery. The earliest known charter is in 1162, when the canons were already well established, and it was raised to the status of an abbey in 1235. Its buildings, including a widely visible square tower, largely ruined church, cloisters, refectory and small chapter house, are the best-preserved of any Scottish mediæval monastic house. The ruins are under the care of Historic Scotland (with an entrance charge, accessible by ferry from South Queensferry).

Walter Bower, the Abbot between 1418 and 1449, was the author of the Latin Scotichronicon, one of Scotland's most important mediæval historical sources. The island was part of the mediæval diocese of Dunkeld (also dedicated to St Columba), and several of the mediæval bishops were buried within the Abbey church.

Like nearby Inchkeith and the Isle of May, Inchcolm was attacked repeatedly by English naval raiders in the 14th century. This was at the height of the Scottish wars and decisive battles were being fought in the Lothians around Stirling, and so the island was effectively in the route of any supply or raiding vessels.

In 1335, there was an especially ruthless raid by an English ship when the abbey’s treasures were stolen, along with a statue of Columba. The story goes that the ship was nearly wrecked on Inchkeith and had to dock at Kinghorn. The sailors taking a religious turn, thought that this was due to the wrath of Columba, and returned the statue and treasures to the island, and experienced good weather on their outward journey.

In 1384, an English raid attempted to set alight Inchcolm Abbey, but this again was foiled by the weather – in this case a strong wind blew out the flames.

In the 16th century, the island suffered further English depredation. In 1547, after the Battle of Pinkie Cleugh, Inchcolm was fortified by the English, like nearby Inchgarvie - while Inchkeith was occupied by their Italian mercenaries for two years. Sir John Luttrell garrisoned the island with 100 arquebus men and 50 labourers on Saturday 17 September 1547.[3] Early in October 1547, the Earl of Angus attempted to recapture the island with five ships. An inventory of 8 January 1548 lists the English armaments on the island as; one culverin; one demi-culverin; 3 iron sakers; a brass saker; 2 |iron falcons; 3 brass falcons; 4 fowlers; 2 port pieces; 14 bases; 90 arquebuses, 2 chests of bows; 50 pikes; and 40 bills.[4] The English commander, John Luttrell, abandoned the island and destroyed the fortifications he had made at the end of April 1548.[5]

The island was also used as a prison. Amongst those interned here were, Archbishop Patrick Graham of St Andrews, along with Euphemia/Affrica (Oighrig), mother of Alexander, Lord of the Isles.

Due to their island location, Inchcolm’s religious buildings are in better condition than most of those on the mainland as they could not be so easily destroyed by the iconoclasts of the Reformation.

In the 16th century it became the property of Sir James Stewart, whose grandson became third Earl of Moray by virtue of his marriage to the elder daughter of the first earl. From it comes the Earl's subsidiary title of Lord St Colme (1611).

In the 1880s, a skeleton was found built into one of the abbey’s walls. It was standing upright and is of unknown date.

During both the First World War and the Second World War, Inchcolm was fortified, like many of the other islands of the Forth in order to defend Edinburgh and Leith and the naval base at Rosyth. In addition to the battery of guns, 576 Cornwall Works Company, Royal Engineers, built a tunnel under the hill at the east end of the island. The tunnel is dated 1916-17. The remains of a NAAFI still remain, and are used as a small shop by Historic Scotland.

Currently two ferry services operate trips to Inchcolm island, and allow passengers an hour and a half to explore the island. The Maid of the Forth and the Forth Belle both operate from the Hawes Pier in South Queensferry between Easter and late October.

The main feature of the island is the former Augustinian Inchcolm Abbey (Historic Scotland), Scotland's most complete surviving monastic house. In former times, and perhaps partly due to its dedication to Columba, it was sometimes nicknamed 'Iona of the East'. The well-preserved abbey and ruins of the 9th-century hermit's cells attract visitors to the island.[1]

It was the home of a religious community linked with St Colm or St Columba, the 6th-century Abbot of Iona. King Alexander I was storm-bound on the island for three days in 1123 and in recognition of the shelter given to him by the hermits, promised to establish a monastic settlement in honour of St Columba. Though the king died before the promise could be fulfilled, his brother David I later founded a priory here for monks of the Augustinian order; the priory was erected into an abbey in 1223. 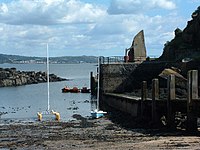 The west end of the island is home to a large colony of seagulls and fulmars. Seals are commonly spotted around the island and basking on neighbouring outcrops. There are no stoats or hedgehogs on the island; thus, eggs can often be found on the ground.

Today the island is inhabited by two Historic Scotland stewards who maintain the island and run the shop.