Heywood is a town in Lancashire, at tehe edge of the conurbation joining the South Lancashire towns where townscape gives way to moorland. At the 2001 census it had a population of 28,024. The town is on the south bank of the River Roch and is 2½ miles east of Bury, 3½ miles west of Rochdale, and 7½ miles north of the City of Manchester. Middleton is just to the south, whilst to the north are the Cheesden Valley, an open moorland, and the Pennines.

Heywood's nickname is Monkey Town, a name with unclear origin, but known to date as far back as 1857.[1]

In the 15th century Heywood "consisted of a few cottages"[2] and local folk supplemented their incomes by hand-loom woollen weaving in the domestic system.[3] In the Industrial Revolution, Heywood was utterly transformed and there was "an influx of strangers causing a very dense population".[2][3] This became modern Heywood; an industrial town, until the decline of the mills in the mid-20th century.

Economically, Heywood is supported by its proximity to junction 19 of the M62 motorway, which provides transport links for large distribution parks in the south of the town. The major landmark is the Parish Church of St Luke the Evangelist which dominates the town's centre and skyline.

Heywood has a station on the East Lancashire Railway, a heritage railway and local tourist attraction. 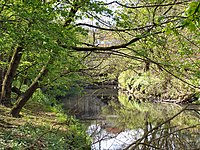 Heywood is south of the Pennines, on the south bank of the River Roch. The larger towns of Bury, Middleton and Rochdale lie to the west, south and northeast respectively. Manchester city centre is 7½ miles south of Heywood.

At the north of Heywood, the River Roch meanders westerly into Bury, and then onwards to Radcliffe where it unites its waters with the River Irwell. The general slope of the land in Heywood increases in height away from the Roch. From the north bank of the Roch is the Roch Valley and Cheesden Valley. The Cheesden Valley is a wooded river valley of the Cheesden Brook, flanked on all sides by high moorland and small hamlets, like Birtle. The soil is sandy, and the subsoil is clay.[4]

Heywood's built environment follows a standard urban structure, consisting of residential dwellings centred around a Market Street in the town centre, which is the local centre of commerce. There is a mixture of low-density urban areas, suburbs, semi-rural and rural locations in Heywood, but overwhelmingly the land use in the town is residential. Heywood is surrounded on all sides by Green Belt, variously consisting of wooded river valleys and high moorland in the north, and flat farmland in the south.[5]

Evidence attests that human activity in the area extends back to the Mesolithic period; flints have been found in Heywood, in the Cheesden Valley and Knowl Moor areas. Artefacts from Bronze Age and the Roman period have been discovered.[6] A Bronze Age cairn 2 feet high and 33 feet in diameter was discovered in the 1960s. Excavations by the Bury Archaeological Group revealed beakers associated with human burials.[7]

The name Heywood is believed to derive from the Old English word "haga", meaning hedge or animal-enclosure.[1] In the 12th century, Heywood was recorded as a hamlet in the township of Heap.[6]

A family surnamed Heywood can be traced back to the 11th century, and in 1286, Adam de Bury granted the land of Heywood to Peter of Heywood.[3] Heywood Hall, the administrative centre of the manor and the seat of the Heywood family, was built in the 13th century.[6] A member of the family and a resident of Heywood Hall was Peter Heywood, the magistrate who, with a party of men, arrested Guy Fawkes during the Gunpowder Plot of 1605.[1][6] Another member of the family, also called Peter Heywood, was aboard the HMS Bounty when its crew mutinied in 1789.[8] 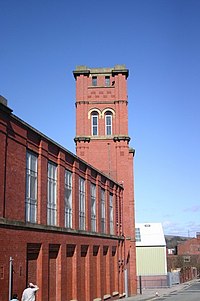 The mill known locally as The Mop Shop

During the Middle Ages the area was thinly populated and consisted of several hamlets. Apart from the Heywoods of Heywood Hall, the sparse population of Heywood comprised a small community of farmers, most of whom were involved with pasture but supplemented their incomes by weaving woollens and fustians in the domestic system.[1][3]

Industrial textile manufacture was introduced in the town in the late 18th century and the first spinning-mill – Makin Mill – was built at Wrigley Brook (later known as Queens Park Road).[1] By 1780 there remained less than 100 hand-loom fustian weavers out of a population of 2,000[3] and industrialist Sir Robert Peel (father of Prime Minister Robert Peel) converted Makin Mill for cotton production.[3][6] This initiated a process of urbanisation and socioeconomic transformation in the area and the population moved away from farming, adopting employment in the factory system. The cotton-trade in Heywood grew, and by 1833 there were 27 cotton mills.[1]

What was described as a period of "extraordinary growth of the cotton-trade" in the mid-19th century,[2] led to "an influx of strangers causing a very dense population".[3] Urbanisation caused by the expansion of factories and housing meant that in 1885, Rochdale-born poet Edwin Waugh, was able to describe Heywood as "almost entirely the creation of the cotton industry".[1]

In 1905 Plum Tickle Mill began operation as the largest mule-spinning mill in the world under one roof, however, Plum Mill and its sister-mill, Unity Mill, were idled in the 1960s under the government reorganisation of the cotton industry. The last large weaving mill in the town was J. Smith Hargreaves & Company, towel manufacturers. However this mill was also idled in the 1980s and operations were transferred to WT Taylor & Company in Horwich.

Most of the cotton mills have now been demolished, mainly to make way for housing. One of the last mills remaining, though not in production since 1986, has recently been offered for redevelopment as apartments. The "Mutual Mills", a complex of four, are Grade II listed buildings.

The town also has a history of coal mining. Coal pits were opened in Hooley Clough in the early 19th century by the Lord of the Manor of Rochdale. During the 19th century a colliery at Captain Fold was run by the Heywood Coal Company. Two people were killed at Captain Fold between 1844 and 1848. When the mine flooded in 1852 two more people were killed and the colliery closed soon after. Mining continued in the town with drift mining in Bamford until 1950.[9]

In 1881, the newly created Municipal Borough of Heywood included 67 cotton mills and weaving sheds, 67 machine works and other workshops, 75 cotton waste and other warehouses and 5,877 dwelling houses. It had 22 churches and chapels and 24 Sunday and day schools. The population was estimated at 25,000.

The town was originally served by railway, with Heywood railway station to the south of the town. There were services to Bury Knowsley Street station and to Rochdale, but this line was closed in the 1970s. However, the line has recently been re-opened to Bury, as an extension to the East Lancashire Railway preservation project.

The town had its own canal, the Heywood Branch Canal which is now infilled and largely gone.

There is a local legend that men from Heywood used to have tails and that public houses had holes in their benches for tails to fit through. The legend led to the town developing the nickname of "Monkey Town". This legend is actually fanciful, and the accepted reason is that the local area of "Heap Bridge", once a thriving part of the town was known as 'Ape Bridge' when said in the local accent.

In the 20th century, cheap, foreign cotton sent the town's mills into steep decline; only Glossop in Derbyshire went into sharper recession. Nearby Rochdale held up for a while, shrink more slowly than any other mill-town apart from Wigan, but Heywood suffered without recovery.[10] 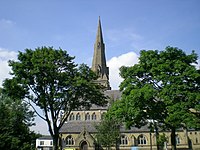 The southern wing of St Luke's church, well known throughout the area for its beautiful proportions and ornate carvings, is suggested to have been one of Hitler's high-priority items for acquisition had he marched into Britain. Although difficult to confirm, it is indeed one of the finest examples of its kind in the whole of Britain.

In 2007 plans were announced to shake off an area's 'mill town' image and rejuvenate the town over a 10–15-year period to appeal to a younger generation. The plan involves creating new retail, business, and community spaces, demolishing 300 flats and houses and replacing them with 1,000 new homes.[11]

From the 18th century onwards, Heywood's economy was closely tied with that of Britain's textile manufacture during the Industrial Revolution, particularly the cotton spinning sector. Since deindustrialisation in the 20th century, Heywood's economic activity has been focused around Heywood Town Centre, and the Heywood Distribution Park, one of the UK's largest single-owned industrial parks. Heywood Town Centre lies at the convergence of Heywood's Market street and York street. Heywood Market Hall, on York street, offers a variety of stalls and small retail outlets.[12] Heywood Distribution Park lies in the south of the town, in Pilsworth, and spans over 200 acres.

The whole town is undergoing a major regeneration as part of the government's New Deal for Communities, and New Heart for Heywood are investing around £52 million. The scheme is designed to renew deprived areas.[13] This bid was initially won in 2000 and work to regenerate this town is still ongoing. Some of the planned works for 2006–2008 include a new Health Connections Centre, a new family Surestart Centre, a new Primary School (although several are being knocked down as a result) and a multimillion-pound sports and leisure village. 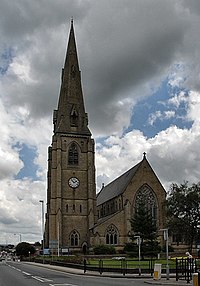 The Parish Church of St Luke the Evangelist is Heywood's major landmark – the focal point of the town centre. A place of worship at the site of St Luke's is known to have existed before 1611.[14] The church started life as a chantry chapel for the Heywood family.

The Old Heywood Chapel was demolished in 1859 to make way for the present church, built to the designs of Joseph Clarke.[14] The foundation stone was laid on 31 May 1860, and the building was completed in 1862 using stone from Yorkshire and ashlar from Staffordshire and Bath.[14] St Luke's was consecrated on 8 October 1862 following a public subscription appeal, and dedicated to Luke the Evangelist.

The tower and spire is detached from the main church building and stands 188 feet high, dominating Heywood's centre and townscape.[14]

Historically, Heywood's only landmark was Heywood Hall, the town's former manor house which was inhabited by the Heywood family. On Heywood in 1881, Edwin Waugh said:

It looks like a great funeral on its way from Bury to Rochdale, consisting of little more than a mile of brick-built cottages and shops. The very dwelling houses look as though they worked in factories[15]
—Edwin Waugh, Lancashire Sketches, 1881 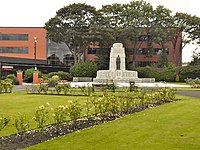 Heywood War Memorial stands in Memorial Gardens opposite the Parish Church of St Luke the Evangelist, and was originally erected "to the men of Heywood who gave their lives" during the First World War, but later, the Second World War. When it was unveiled in 1925, it did not include a roll of honour as there were insufficient funds for the work. The names were finally engraved in 1986, after a campaign organised by the Royal British Legion secured a grant from the council.

The memorial is a grey granite cenotaph decorated with wreaths and crosses. At the front is a bronze female figure holding a laurel wreath to symbolise victory. It was sculpted by Walter Marsden. The Memorial was commissioned by the Heywood War Memorial Committee and unveiled on 22 August 1925 by Hewlett Johnson, the Dean of Manchester.[16]

Ashworth Valley is a renowned local beauty spot. Queens Park re-opened in 2006 after a multimillion-pound facelift, with many of its Victorian attractions restored, including the old fountain and many of the statues.