Horwich is a small town in Lancashire, 5 miles southeast of Chorley, and almost 6 miles northwest of Bolton. It is at the southern edge of the West Pennine Moors with the M61 motorway passing close to the south and west. According to the 2001 Census, Horwich had a population of 19,312.

Horwich emerged in the Middle Ages as a hunting chase. Streams flowing from the moors were harnessed to provide power for bleachworks and other industry at the start of the Industrial Revolution. The textile industry became a major employer and after 1884 the construction of the railway works caused the population of the town to increase dramatically. The old industries have closed and urban regeneration has been led by out of town developments, particularly at Middlebrook, which, since 1997 has been the base of Bolton Wanderers football club, who play at the Reebok Stadium since moving from Burnden Park near Bolton town centre.

The name Horwich derives from the Old English har wice, meaning “grey wych-elm” or “grey village”. In 1221 was recorded as Horewic.[1] The name was recorded as Harewych in 1277 and Horewyche in 1327.[2]

In the Middle Ages Horwich originated as a hunting chase for the barons of Manchester. It was held by Albert de Gresle between 1086 and 1100.[3] In 1249 Henry III granted Thomas Gresle free warren over his lands in "Horewich". The barons appointed foresters and trespassers in the forest were brought before the court baron or court leet for punishment.[4] In 1277 Robert Gresle the 7th baron prosecuted Martin de Rumworth for carrying off deer in Horwich Chase[5] which was described in 1322 as being within "a circuit of sixteen leagues, and is yearly worth in pannage, aeries of eagles, herons and goshawks, in honey, millstones, and iron mines, in charcoal-burning, and the like issues, 60 shillings; of which the vesture in oaks, elms and wholly covered with such, 160 marks."[2]

In 1598 a number of men were presented at the court leet for tithing and in 1621 the court leet recorded "paid for hue and crye that came from Horwich after the man who made an escape forth of ye stocks for stealing certain lynen cloth 8 d."[2] By the 17th century the amount of woodland in the Horwich forest was reduced by house building and for fuel.[6][7] Horwich Moor was enclosed between 1815 and 1818 and race meetings were held between 1837 and 1847.[2]

The manor became the property of the Andertons of Lostock Hall, Lostock, who purchased it in 1599 from Nicholas and Elizabeth Mosley. These lands were confiscated by the crown in 1715 after the Battle of Preston. They were leased to the Blundells whose coat of arms is displayed above the door at the Blundell Arms on Chorley Old Road.

The Pilkingtons were farmers who became gentry, Richard Pilkington was owner of rights in the Horwich Manor.[8] William Pilkington (1765–1831) became a physician and apothecary in St Helens and his sons Richard (1795–1869) and William (1800–1872) were the founders of Pilkington Glass.[9]

Horwich yarn was mentioned in records from the reign of Henry III.[2] In the 1770s brothers, John and Joseph Ridgway, land agents to the Blundells, moved their bleach works from Bolton to Wallsuches.[6][7] Their works was the oldest and one of the few stone-built mills in the Bolton borough.[10] The firm was one of the earliest users of chemical bleaching using chlorine.[11] In 1798 the firm installed a Boulton and Watt steam engine.[12]

Horwich Vale Printworks, founded in 1799 by the River Douglas, printed cloth using machines and handblocks.[12] On the slopes of Winter Hill, stone was quarried and there were several small collieries and a firebrick and tile works.[2] In 1896 the Montcliffe Colliery was owned by Adam, Mason and Son and managed by Joseph Crankshaw and Joseph Kenwright. It employed 26 men underground and seven surface workers getting coal and fireclay from the Mountain coal seam.[13] Crankshaws pipeworks used the fireclay and had had several beehive kilns at their works at Tiger's Clough.[14] In the mid 19th century cotton mills were built by W. & W. Bennett and Peter Gaskell.[15]

Ridgways provided land for the early 19th century Club Houses, a grid pattern development of streets of stone built cottages south of Church Street. Some had basements for hand loom weaving. In 1851 the occupants were crofters, stovers and bleachers.[12] In 1881 the population of 3,761 lived in 900 houses, and had remained stable for fifty years. A rapid increase in population over the next ten years was caused by the arrival of the railway works and W.T. Taylor's cotton mill. In the late 19th century, brick terraced houses, in streets named after famous engineers, were built near to Horwich Works on both sides of Chorley New Road (the A673) on company land.[12] By 1891 Horwich was transformed into a town of 12,850 people.[6][7]

In 1937 the de Havilland Aircraft Company built a factory which supplied aircraft to Cobham's Flying Circus and manufactured propellers. The company was taken over by Hawker Siddeley and subsequently British Aerospace, BAe, but is now closed.[16]

In spring 1884 the Lancashire and Yorkshire Railway (L&YR) began construction of a large complex for building and maintaining locomotives to replace its works at Miles Platting. Horwich Works was built on 351 acres of land bought for £36,000. The first workshop, Rivington House opened in February 1887. It is 350 feet long by 55 feet wide. The long brick built workshops had full-height arched windows and were separated by tram and rail tracks. Work to construct the three-bay, erecting shop (1,520 feet long, 118 feet wide) began in March 1885. Inside it were 20 overhead cranes.[17] By November 1886 the first locomotives arrived at the works for repair. The first Horwich built locomotive, Number 1008, left the works in 1887 and is preserved at the National Railway Museum.[6][7][18][19]

In the First World War|First and Second World Wars, the works played a part in the war effort manufacturing tanks and munitions.[6][7]

The L&YR amalgamated with the London and North Western Railway in 1922 becoming a constituent of the London, Midland and Scottish Railway, (LMS) in 1923. Horwich Works continued to build and repair locomotives for the LMS until the company was nationalised in 1948 by the Transport Act 1947, becoming British Railways. In 1962, British Railways transferred control of its main works to British Railways Workshops Division, with its headquarters in Derby. In 1970 it was renamed British Rail Engineering Limited (BREL).[6][7][18][19]

The last steam locomotive built at Horwich Works left on 27 November 1957 and the last diesel built there left on 28 December 1962. It was reduced to repairing engines and maintaining railway wagons. On 18 February 1983 BREL announced that the works would close at the end of the year. Protest marches and spirited trade union resistance failed to alter the decision and at 1 pm on Friday, 23 December 1983 Horwich Works closed after 97 years.[6][7][18][19] The freehold of the railway works site was transferred from British Rail to Bolton Council in the mid-1990s.

A proposal to demolish the works and build 1,600 homes and a school was submitted to Horwich Town Council in early 2010. Middlebrook Retail Park could be extended as part of the development. 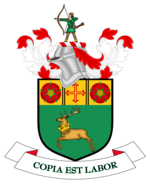 The arms of Horwich Town Council

Horwich was anciently a township in the parish of Deane, in the Hundred of Salford. In 1837 Horwich joined with other townships and civil parishes to form the Bolton Poor Law Union and took joint responsibility for the administration and funding of the Poor Law in that area and built a workhouse in Farnworth.[20] The Horwich Local Board of Health was established in 1872 and was superseded by Horwich Urban District, which lasted until 1974.

A Coat of Arms was granted to the newly erected Town Council on 6 December 1974.

Suburban localities in Horwich include Wallsuches and Middlebrook.

Horwich extends to 3,230 acres, 3 miles from north to south and 2 miles west to east. The River Douglas flowing in a south westerly direction forms part of its northern boundary.[15] The landscape to the north is dominated by Winter Hill, Rivington Pike and the West Pennine Moors. The highest point is 1,475 feet on the moors in the north from where the ground slopes down towards the south and west, where the lowest land is about 350 feet. On Wilders and Horwich Moors the underlying rock is Millstone Grit, and in the intermediate slopes are found the Lower Coal Measures of the Lancashire Coalfield. The Middle Coal Measures are found in the southwest of the township.[2]

Red Moss, just south of the town centre, is a 117 acre “Site of Special Scientific Interest” which was designated in 1995 because of its biological interest. Red Moss is the best example of lowland raised mire in south Lancashire. The site is managed by the local Wildlife Trust.[21]

It is not known when Horwich's first chapel was built. It was a chapel of ease to St Mary's Church in Deane, but in 1565 the commissioners for "removing superstitious ornaments" took various idolatrous items from the chapel.[2] In 1669 a conventicle, meeting of nonconformists, was reported at Horwich and the ringleaders were prosecuted. A chapman, Philip Martindale, was among those whose estates were sequestrated for 'delinquency' by Parliament during the Civil Wars. In 1672 a nonconformist service was held at Old Lords Farm, the home of Thomas Willoughby. After the Civil War, with the contrivance of Thomas Willoughby and the connivance of the Vicar of Deane,[22] the chapel was used by nonconformists.

In 1716 Bishop Gastrell of Chester recovered the chapel for the established church.[2] The chapel was replaced in 1782 and rebuilt as Holy Trinity Church, a Commissioners' Church, in 1831. Until 1853 became a parish in its own right with Holy Trinity as the parish church.[6][7]

After being ejected from Horwich Chapel, Richard Pilkington built "New Chapel" for the nonconformists between 1716 and 1719. It was enlarged in 1805. In the 18th and 19th centuries other nonconformist churches and chapels were built.[6][7] Horwich Lee Chapel was formed in 1754 by Presbyterian members of the congregation of Rivington Unitarian Chapel. A chapel was erected in 1856, replacing one built in 1774. It became Lee Lane Congregational Church and closed in 2005. A preacher from Bolton introduced Methodism in the early 19th century and a chapel opened in about 1810. The Independent Methodist chapel in Lee Lane was built in 1867, "the congregation having originated some years earlier in a gathering of teetotallers". Primitive Methodists had a chapel on Horwich Moor and a Baptist church was built in 1890.[2]

Several of the town's sporting organisations have origins in the sport and social clubs of Horwich Locomotive Works. Horwich RMI Harriers and Athletic Club founded in 1924, is based at Middlebrook and participates in road, fell and cross country races, track and field athletics.