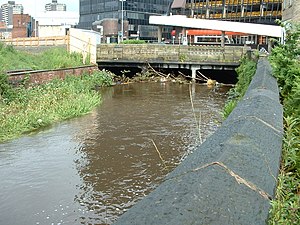 The Roch at the composite bridge

The River Roch (roʊtʃ) is a river in southern Lancashire, a tributary of the River Irwell. It flows through Rochdale, but trather than giving the town its name, the Roch appears to have been named as a back-formation from that of the town.

The Roch rises in the Pennines, on Chelburn Moor, south of Todmorden. It flows south through Littleborough towards Rochdale where it is joined by the River Beal at Belfield, and then by the River Spodden from Whitworth.

Turning west, the Roch runs past Heywood and Bury before meeting the River Irwell just to the east of Radcliffe.

The Domesday Book records the name of Rochdale as Recedham, from the Old English reced ham: "hall homestead". The river is not named, until much later on, and appears to have been derived from that of the town.

By the early twentieth century the river had an evil reputation for its heavy pollution from the mills. As early as 1857, one eminent visitor had described it as:

In 1903, the Borough Surveyor proposed the covering of the Roch between the Butts, on the north bank, and South Parade to create an open space some 60 feet wide and 100 feet long. It was slow process, though by July 1904 the first stage of the river covering was complete. In 1910 more was carried out, between Yorkshire Street and Newgate, though progress further was halted by the First World War, and resumed in 1923, covering between Newgate and the Holme (the site of the present Police Station). Finally, in January 1926, the last length, running from the Wellington Bridge area at the bottom of Drake Street, to Weir Street, close by the old Yelloway Coach Company offices, was opened.

This feat of engineering gave Rochdale an enviably wide town centre roadway – and for a time a place in the Guinness Record Book, as the town with the widest bridge in the world

Maintenance work was carried out on the bridge in the 1990s and the river was released from its chains temporarily.[1]

Moving upstream from the Irwell confluence, the tributaries include the following: