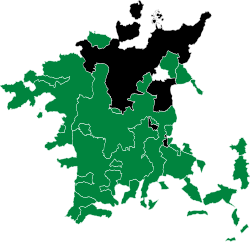 Halfshire is a hundred in the north of Worcestershire adjacent to Staffordshire and Warwickshire. The north of the hundred forms a large part of the Birmingham and west Midlands conurbation. Stretching from Stourbridge in the west to Yardley in the east, it includes the detached part of Worcestershire containing Dudley. It is the most populous of the hundreds, with a population in 2011 of 762,570, rising to 811,908 if detached parts are disregarded.