Yardley is a town within Worcestershire which has become a suburb in the east of Birmingham and thoroughly contiguous with the city’s conurbation.

Yardley's main shopping area is known as Yew Tree, named after the yew that stood, originally to the south of the roundabout, outside what was then Boots, then on the roundabout at the junction in the centre of Yardley. The tree was damaged during work to the roundabout, and as a result was removed. It was later replaced by another tree located in the centre of the island. The Yew Tree was also the name of the town's best known pub, until it became best known for drugs and violence and was shut down.

In 2012, the Swan Shopping Centre was opened in the area serving the Yardley area in the place of the old Swan Centre which used to hold markets. 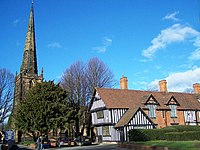 Yardley first appears in the record in a charter of King Edgar I in 972, where it is named Gyrdleah. Yardley is named in the Domesday Book of 1086 and it is stated that it belonged to Pershore Abbey.

The ancient parish forms a salient of Worcestershire territory in the north-east of the county projecting into the body of Warwickshire. Consequently, when the City of Birmingham extended its civic boundaries in 1911, this was the only Worcestershire parish it seized at that time. Others were to follow in later depredations. The ancient parish of Yardley also encompasses Stechford and Hall Green. The area of Gilbertstone straddles the border of Yardley and South Yardley.

Yardley has a Tudor hall called Blakesley Hall and an old church, St Edburgha's, that dates back to the 13th century, with the church tower and spire dating to the 15th century. It was not established by the abbey, but by Aston Church in the Diocese of Lichfield.[1] A Tudor addition to the church is a doorway surrounded by Tudor roses and a pomegranate, commemorating the marriage of Prince Arthur, Prince of Wales, to Catherine of Aragon.

Yardley had a manor that was owned by various lords. It remained unoccupied from 1700 onwards. It was owned by the Royal Family until 1626, when it was bought by Richard Grevis of Moseley Hall. His descendants sold it in 1759 to pay off debts. John Taylor, one of the founders of Lloyds Bank, bought the lordship in 1766. Most of the land, had by then, been purchased by other people so Taylor owned only a small portion of the original grounds.[1]

In 1981, an Arcon V prefab home on Moat Lane was dismantled and transported to Avoncroft Museum of Historic Buildings.[3]

Yardley also contains a moated mediæval site called "Kent's Moat". Now dry, it has retained its depth and shape remarkably well considering its age, as excavations have shown evidence of inhabitation from as early as the 12th century.

The area used to be well-served by horse-buses and then by steam buses. Electric trams were then introduced and they travelled across a new bridge at the River Cole to the Swan.