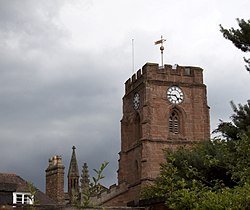 Old Swinford or Oldswinford is an ancient parish, mostly in Worcestershire, but extending into Staffordshire, that forms the majority of Stourbridge.

The extensive ancient parish comprises the townships of Lye, Stourbridge, Wollaston, Wollescote and Upper Swinford in Worcestershire and Amblecote in Staffordshire. Stourbridge and Amblecote, while in the parish, were separate manors.

The Parish Church of Oldswinford is St Mary's.

The manor of Old Swinford changed hands from time to time during the Middle Ages as a result of political upheavals and the changes of fortune of its overlords. It is questionable whether these great feudal lords ever visited this manor, the supervision of the peasants' customary service and the collection of dues and fines being left to their stewards. The Lytteltons, seated a few miles away at Frankley until their house there was destroyed during the Civil War causing them to move to Hagley, acquired the superior manor of Old Swinford in 1564 and they were the dominant local family until the 17th century when, having fallen from favour and lost much of their wealth through involvement in the Gunpowder Plot and the Royalist and Roman Catholic causes in Stuart times, they were superseded by the Foleys whose wealth was based on the rapidly expanding iron industry.

Old Swinford Hospital, a voluntary-aided school with boarding houses, was founded and endowed by the ironmaster, Thomas Foley. The parish name and that of Kingswinford derive from a swine ford, perhaps on the crossing of the Stour that also gave rise to the name Stourbridge. The road crossing there was the main road between the Saxon burhs of Worcester and Stafford.[1] However (conceivably), it was a crossing of the minor brook that runs east of the church and under Brook Road between the houses 2 (The Briars) and 4 (The Willows), Oldswinford.

There are numerous pre-1900 buildings remaining in Oldswinford. The area has also been heavily developed with upmarket private housing since the 1920s.