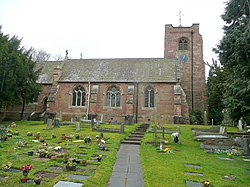 Pedmore is an ancient parish in Worcestershire that forms a residential suburb of Stourbridge. It was originally a separate village until extensive housebuilding during the interwar years saw it gradually merged into Stourbridge. The population of the Pedmore and Stourbridge East ward taken at the 2011 census was 12,471.[1]

Pedmore is home to the Pedmore Cricket Club and is served by the nearby railway stations of Stourbridge Junction and Hagley.

Pedmore is served by two primary schools: Pedmore Church of England School, and Ham Dingle Primary Academy. It is also served by a secondary school - Pedmore High School, which until July 2004 was called The Grange School.

In the 1920s, Pedmore House was built on what is now the end of Ham Lane. It became a local landmark, offering restaurant facilities that later incorporated the Tuscana Italian restaurant as well as 20-bedroom hotel. It closed in July 2006, despite being hugely popular with customers, and was demolished the following year to make way for a housing development by David Payne homes.

This Worcestershire article is a stub: help to improve Wikishire by building it up.
Retrieved from "https://wikishire.co.uk/w/index.php?title=Pedmore&oldid=71823"
Categories: