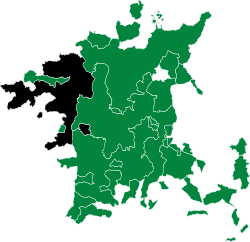 Additionally, the parish of Rochford forms a detached part of Herefordshire locally situated in the hundred.