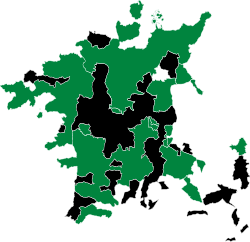 Oswaldslow is a hundred of Worcestershire, occupying much of its central part, with detached parts to be found in all four corners of the county. It is the second-most populous of the hundreds, with a population in 2011 of 185,576, falling to 176,577 if detached parts are disregarded.

*: Census reports suggest that these parishes extend into Halfshire, but later parish lists do not[1][2].
†: Upper Milton hamlet in Halfshire.
‡: Extends into Gloucestershire.
§: Queenhill chapelry in Pershore hundred