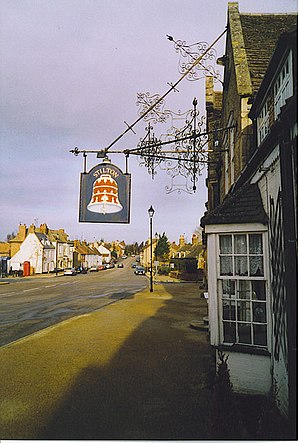 The Bell at Stilton, Huntingdonshire 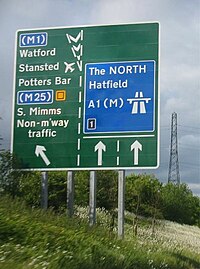 The A1 at South Mimms, Hertfordshire

The Great North Road was a coaching route used by mail coaches between London, York and Edinburgh. The modern A1 mainly follows the Great North Road. The inns on the road, many of which survive, were staging posts on the coach routes, providing accommodation, stabling for the horses and replacement mounts.[1] However, virtually none of the surviving coaching inns can be seen while driving on the A1, because the modern route now bypasses the towns in which the inns are to be found.

A traditional starting point of the Great North Road was Smithfield in Clerkenwell, Middlesex, at the edge of the City of London.

Distances on the road were computed from the now demolished Hicks Hall, situated at the south end of St John Street, just to the north of Smithfield Market.[2] The route ran from Smithfield up St John Street to The Angel, Islington.

However, with the building of the General Post Office at St Martin's-le-Grand in 1829, coaches started using an alternative route, used by the modern A1, beginning at the GPO building and following Aldersgate Street and Goswell Road before joining the old route at the Angel. The Angel was an important staging post on the route.[3] The next important stages were Highgate, Barnet, Hatfield, Baldock, Biggleswade and Alconbury, all replete with traditional coaching inns.

At Colsterworth the Great North Road diverges west of the Roman road and continues through Grantham, Newark, Retford and Bawtry, entering Yorkshire to reach Doncaster.

North of Doncaster the Great North Road again follows a short section of Ermine Street called Roman Rigg or Roman Ridge. Further north the Great North Road crossed the Roman Dere Street near Boroughbridge from where it went via Dishforth and Topcliffe to Northallerton and then out of Yorkshire across the River Tees into County Durham, running through Darlington and Durham.

A road forked off to the left at the bridge in Boroughbridge to follow Dere Street, thence from Scotch Corner to Penrith in Cumberland and on up Annandale to Glasgow. Part of this route was used for the original A1, with a local road from Scotch Corner by way of Barton to Darlington making the link back to the old Great North Road.

In the first era of stage coaches York was the terminus of the Great North Road, on the route Doncaster–Selby–York but was later superseded by the route Doncaster–Ferrybridge–Wetherby–Boroughbridge–Northallerton–Darlington, the more direct way to Edinburgh, the ultimate destination. The first recorded stage coach operation running to York was in 1658. This took four days to reach its destination. Faster mail coaches began using the route in 1786, stimulating a quicker service from the other passenger coaches. In the 'Golden Age of Coaching', between 1815–35 coaches could go from London to York in 20 hours and from London to Edinburgh in 45 and a half hours. In the mid nineteenth century coach services could not compete with the new railways. The last coach from London to Newcastle left in 1842 and the last from Newcastle to Edinburgh in July 1847.[5] 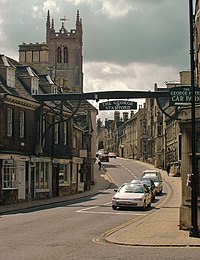 The George at Stamford

The highwayman Dick Turpin's flight from London to York in less than 15 hours on his mare Black Bess is the most famous legend of the Great North Road. Various inns along the A1 claim Turpin ate a meal there, or stopped for a respite for his horse. Harrison Ainsworth, in his 1834 romance Rookwood, immortalised this with a spirited account of Turpin's ride. Historians argue that Turpin never made the journey, claiming instead that the ride was by John Nevison, known as "Swift Nick", who was born and raised at Wortley near Sheffield and was a highwayman in the time of Charles II, 50 years before Turpin. It is claimed that Nevison, in order to establish an alibi, rode from Gad's Hill, near Rochester in Kent, to York (some 190 miles, in 15 hours.

The Winchelsea Arms was an inn on a long straight section of the Great North Road near Stretton which was reputed to be another haunt of Dick Turpin. It is now called the Ram Jam Inn after a story from those coaching days. A coach passenger undertook to show the landlady the secret of drawing both mild and bitter beer from the same barrel. Two holes were made and she was left with one thumb rammed against one and the other jammed into the other. The trickster then made off.[6]

In literature the Great North Road features in The Pickwick Papers by Charles Dickens. Part of the J B Priestley novel The Good Companions features the Great North Road; represented to the northerner Jess Oakroyd as the gateway to such exotic destinations as Nottingham. The Lord Peter Wimsey short story "The Fantastic Horror of the Cat in the Bag" by Dorothy L Sayers features a motorcycle chase along the Great North Road. Similarly, Ruined City by Nevil Shute features an all night drive from Henry Warren's house in Grosvenor Square, Mayfair, along the Great North Road as far as Rowley and then up to Greenhead near Hadrian's Wall, where Warren is dropped off to go walking. His chauffeur, keen to get home for a date with the maid, is killed near Retford.

Many of the romances of the eighteenth and nineteenth centuries feature young eloping couples fleeing up the Great North Road to marry in Scotland, as often as not pursued by the young lady's angry father.

Dick Whittington and His Cat are characters in an old story adapted to the stage in 1605 which since the 19th century has become one of the most popular pantomime subjects, very loosely based on the historical Richard Whittington, a mediæval Lord Mayor of London. Dick, a boy from a poor family in Gloucestershire, walks to London to make his fortune, accompanied by his cat. He meets with little success there. Discouraged, as Dick and Cat are making for home by way of Highgate Hill, they hear the Bow Bells from distant London; Dick believes they are sending him a message to "turn again" – and that he will become Lord Mayor of London. They return: Dick makes his fortune and indeed becomes Lord Mayor. A large hospital on Highgate Hill is named after the story, and a statue of Dick's faithful pet stands nearby.

The Great North Road is mentioned in Mark Knopfler's song, "5:15 AM", from the album Shangri La.

St John Street in Clerkenwell was part of the original route of the Great North Road. It runs from Smithfield Market and Charterhouse Street in the south to the junction of City Road and Pentonville Road (near Upper Street) in the north, close to the Angel tube station. The Red Bull Theatre was located on the street between 1604 and 1666, when it was destroyed in the Great Fire of London. On an island location in the middle of the street, at the southern end, where St John's Lane branches off to the west, stood Hicks Hall which was the first purpose-built sessions-house for the Middlesex justices of the peace. This building was used as the initial datum point for mileages on the Great North Road, and continued in this role, even after the fabric of the building no longer existed when it was demolished, soon after 1778.[7]