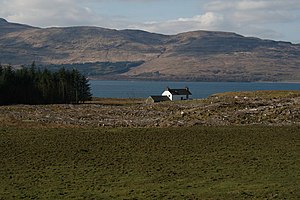 Morvern (Gaelic: A' Mhorbhairne) is a triangular peninsula in northern Argyll, on the north-western shore of the broad waters of Loch Linnhe, bounded by Loch Sunart to the north and the Sound of Mull to the southwest over which lies the Isle of Mull. The name of this district is derived from the Gaelic A' Mhorbhairne ("the Sea-Gap"). A mountainous, cliff-bound land, its highest point is the summit of the Creach Bheinn which reaches 2,800 feet above sea level.

Morvern has an area of some 250 square miles, with a current population of just 320.

Kiel Church and the Morvern Cross, at Lochaline

The ruined Ardtornish Castle was in the 12th century in the possession of Somerled, the famed Lord of the Isles. In later ages it remained the possession of the Lords of the Isles, whose ownership was recalled in a poem of the same name by Sir Walter Scott. Kinlochaline Castle was once the seat of the MacInnes clan. It was largely destroyed by the army of Oliver Cromwell and restored in 1890.

Before the Highland Clearances the population of Morvern was about 2,500.

The history of the parish of Morvern in the nineteenth century has been detailed in Philip Gaskell's Morvern Transformed.

Some residents of St Kilda were relocated to Lochaline, the main village of Morvern, when the islands were evacuated in 1930, to become for a time an isolated Gaelic-speaking people within English-speaking Morvern, though less isolated than the wild rocks they had called home. 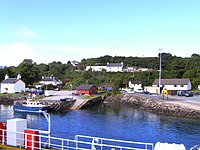 Lochaline is a ferry port to the Isle of Mull. The village had a small silica mine until 2008. Rahoy has a deer farm supported by public funds.

The Morvern Community Development Company, the local development trust, was established in 1999. It aims to provide increased employment opportunities, particularly for the young, and to create a wind energy project. It has a full-time development worker paid for from taxpayers' money.

Ardtornish, one of the largest estates in the area, received planning permission in 2010 for a new "township" of 20 houses at Achabeag, two miles west of Lochaline.[1]

James Macpherson, author of the Ossian poems, used Morvern as a by-name for Scotland. Macpherson claimed to have translated ancient poems from manuscripts found amongst these coasts, though in truth they were his. Nevertheless, these are soaring, heroic verses telling of great clashes of arms in Ulster and the isles. He concludes a piece on Fingal:

The wild roes feed on the green tomb of the mighty king of Morven! Blest be thy soul, thou king of swords, thou most renowned on the hills of Cona!

Yet this is by far the last we hear of "windy Morven", "rocky Morvern", "resounding Morven", "distant Morven" and so forth, nor yet of the victorious King of Morven summoned to Erin's aid. 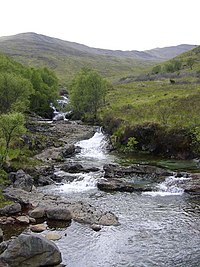