Ingleborough Cave (formerly known as Clapham Caves) is a show cave close to the village of Clapham in the West Riding of Yorkshire, adjacent to where the water from Gaping Gill resurges. The cave runs beneath the southern slopes of Ingleborough, the massive fell from which it received its name.

That part of the cave which is open to the public follows a fossil gallery for some 550 yards. The passage is spacious, and well decorated with stalagmitic formations.

A connection has also been made with Fox Holes, a cave near Trow Gill.

A small stream in the show cave drops into a rift called the Abyss. An underwater connection has been made between the passage at the bottom and Beck Head Cave, the resurgence for the Gaping Gill water. 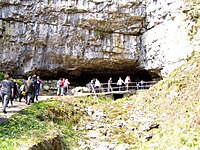