Gaping Gill (also known as Gaping Ghyll) is a natural cave in the West Riding of Yorkshire, on the southern slopes of Ingleborough. It is one of that hill's unmistakable landmarks – a pothole 320 feet deep with the stream of Fell Beck flowing into it.[1]

After falling through one of the largest known underground chambers in Britain, the water of Fell Beck disappears into the bouldery floor and eventually resurges adjacent to Ingleborough Cave.[2][3]

The shaft was the deepest known in Britain, until Titan in Derbyshire was discovered in 1999.[4]

Gaping Gill still retains the records for the highest unbroken waterfall in Britain and the largest underground chamber naturally open to the surface.

Due to the number of entrances which connect into the cave, many different routes through and around the system are possible. Other entrances include Jib Tunnel, Disappointment Pot, Stream Passage Pot, Bar Pot, Hensler's Pot, Corky's Pot, Rat Hole, and Flood Entrance Pot. 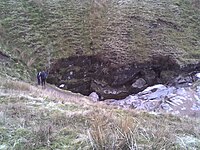 A view of the crater around the mouth of Gaping Gill

A detailed 3D model of the chamber has been created using an industrial laser rangefinder which showed that its volume is comparable to the size of York Minster.[6][7]

The first recorded attempted descent was by John Birkbeck in 1842 who reached a ledge approximately 180 feet down the shaft which bears his name.[8] The first complete descent was achieved by Édouard-Alfred Martel in 1895. In 1983 members of the Cave Diving Group made the underwater connection into Ingleborough Cave.

An extreme rock-climb (graded E3, 5c) is possible up the main shaft which requires very dry conditions. It was first pioneered in 1972 with ten points of aid. The first free ascent was made in 1988.[9]