Bannockburn is a village in Stirlingshire, standing immediately south of the City of Stirling. It is named after the Bannock Burn, which flows through the village before entering the River Forth. 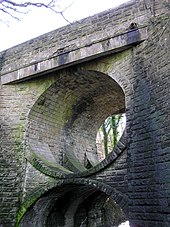 Telford's circular-arch bridge over the Burn

In the late 18th and early 19th centuries the Wilson family, of Bannockburn, designed and wove tartans for the army. Many of the so-called Clan tartans were created by the Wilsons in response to the needs of the Clan chiefs who, without their own "authentic" tartans, approached the Wilsons for suitable patterns. The visit of King George IV to Edinburgh in 1822, and his insistence that the Clan chiefs attend his banquets and levees in their proper clan tartans, prompted this reaction. The Wilson family ceased business in 1924.

Bannockburn used to have a railway station located next to the site of the bus depot.

Bannockburn is a place in Stirlingshire where was fought a bloody and decisive battle in the long, fratricidal wars of the Middle Ages. At Bannockburn Robert Bruce defeated the armies of King Edward II, and thereafter established Scotland as a separate kingdom. The battlefield today is owned by the National Trust for Scotland.