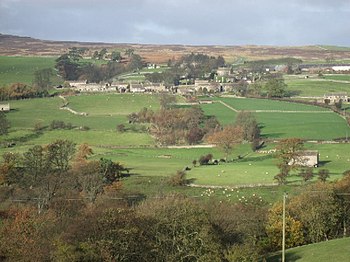 View of Coverdale looking towards Melmerby

Coverdale is a dale in the far east of the Yorkshire Dales, all within the North Riding of Yorkshire. It takes its name from the river which carved it, the River Cover, a tributary of the River Ure, and accordingly the dale runs down to join Wensleydale, the valley of the Ure.

The head of Coverdale is at a pass, known as Park Rash Pass,[1] between Great Whernside to the south and Buckden Pike to the north. It is accessible by a single track road, which runs the length of the dale and over the pass to Kettlewell in Wharfedale.[2] From here, the dale runs north-east to join the eastern end of Wensleydale by the hamlet of Coverbridge.

Speight suggests that the name derives from the Anglo-Saxon Cofa-Dal which means Cave-Dale (presumably due to the many caverns in the dale) or it may derive from Kofur which means Arrow; an allusion to the swiftness of the water in the dale.[3]

An abbey was founded at Coverham in the 14th century by Ralph, son of Robert Lord of Middleham. And granted to the Premonstratensian Order (known as the White Canons). It was dissolved in 1536 under Henry VIII. Whilst some of the ruins are still extant, it is not open to the general public.[4][5]

In the 18th century, the road through Coverdale from Kettlewell to Middleham was used as the route of coaches between London and Richmond. The route came north through Halifax, Keighley, Skipton and Cracoe as part of its 250-mile journey.[6]

The valley gives its name to a variant of Yorkshire Dales cheese, produced at the Wensleydale Creamery in Hawes. Coverdale cheese is of the same general texture and flavour as Wensleydale, but thought by some to be slightly sourer and therefore possessing greater 'edge'.[7]

The River Cover meets its confluence with the River Ure at the hamlet of Coverbridge which consists of Clarkson's farm and the Coverbridge Pub, an ancient travellers inn on the road from Jervaulx Abbey to Middleham.[8]

The Coverbridge Pub has at least two claims to fame including having been the hiding place of monks who kept alive the recipe of Wensleydale cheese during the sacking of Jervaulx Abbey by King Henry VIII's men, and, the scene of the first formally recorded game of cricket in 1706. In 2006 the Coverbridge Cricket Festival celebrated the 300th anniversary in a massive spectacle of cricket supported by the Red Arrows and a spitfire and Hurricane of the RAF with musical support provided by the band of the Royal Regiment of Fusiliers. A Coverbridge team of dalesmen played the visiting Awali Camels team on tour from the Kingdom of Bahrain.[9]

Other sights of the dale

Villages in the dale

Villages in the dale include: