Hardraw Force is a waterfall on the Hardraw Beck in Hardraw Scar, a wooded ravine in the North Riding of Yorkshire as the beck drops down into Wensleydale.

The waterfall is to be found just outside the hamlet of Hardraw, and a mile north of Hawes in the dale.

The fall is a spectacular single drop of 100 feet from a rocky overhang, and is claimed to be England's highest unbroken waterfall, at least excluding unseen underground cascades.

(The record was briefly broken on 6 December 2015 by a temporary waterfall that formed at Malham Cove, in the West Riding: after Storm Desmond, water was seen falling off the 230-foot cliff into the stream below.[1] An underground waterfall inside nearby Gaping Gill, on the western flank of Ingleborough, has an unbroken fall of over 300 feet.)

Geologically, the bed of the river and plunge pool is shale; on top of that is sandstone and the top layer is carboniferous limestone.

Public viewing of Hardraw Force is rather unusual, as the visitor has to go through the bar of the Green Dragon Inn public house in Hardraw to reach the falls; a modest entrance fee is payable on the way through the pub.[2] Access behind the falls is now prohibited.

Hardraw Scar (54°18’58"N, 2°12’18"W) is a limestone gorge located behind the Green Dragon inn at Hardraw near Hawes in Wensleydale. It is a natural amphitheatre and in September is the site of an annual brass band entertainment contest. The contest attracts bands from all over the North of England and is a popular event amongst players and audiences alike.

The gorge provides a gorgeous backdrop with Hardraw Force at its far end.[3]

In 1899, a great flood came racing over the waterfall and into Hardraw itself, ruining buildings and uprooting coffins from the graveyard. The lip of the waterfall was demolished by the force of the water and the landowner at the time (Lord Wharncliffe) got his estate manager to repair the lip and it is now held together at the top by metal stakes.[4]

Hardraw Force in art and and popular culture 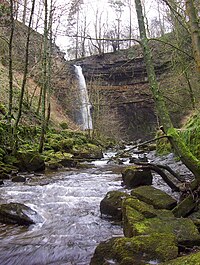 Both J. M. W. Turner and William Wordsworth have visited the waterfall[5] and both men stayed at the Green Dragon Inn.[6]

The falls were used as a location in the film Robin Hood: Prince of Thieves, in the scene where Maid Marian catches Robin Hood bathing under a waterfall.[7]

Hardraw Force is the setting for a brass band competition held annually on the second Sunday in September. The competition was first held in the falls' natural amphitheatre in 1884 when six bands took part; the competition lapsed in 1927 but was revived in 1976 and has gone from strength to strength since. In recent years two other musical events have started up at the falls: the Hawdraw Bash is a Folk Rock concert in early July and the Hardraw Gathering is a three-day festival of traditional music at the end of July.