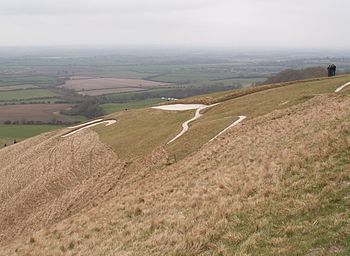 From White Horse Hill down to the Vale

The Vale of White Horse or Vale of the White Horse is a long, broad valley which sweeps down from the Berkshire Downs to the River Thames in north-western Berkshire. The Vale takes its name from the White Horse of Uffington, a huge and mysterious hill figure carved into the chalk hillside above Uffington.

The Vale is a geographically distinct region, a well watered valley lying between the Berkshire Downs and the River Thames. Its southern edge is marked by the rising hills which reach a ridge along which runs the ancient Ridgeway path.

The Vale is the valley of the Ock, a stream which rises in the Berkshire Downs and flows westward to enter the Thames at Abingdon. The Vale is almost flat and well-wooded; its green meadows and foliage contrasting richly with the bald summits of the Berkshire Downs, which flank it on the south. The numerous elm trees, that once were a major feature of the Vale, were lost to Dutch Elm Disease from the 1970s.

To the North, a low ridge separates the Vale from the upper Thames Valley, holding back the soft Jurassic sedimentary deposits (Greensand, Gault and Kimmeridge Clay) behind a hard corallian limestone escarpment ridge, in what is technically a hanging valley. The Vale is from two to five miles broad, and the distance by road from Abingdon at its foot to Shrivenham at its head is 18 miles.

Local usage can sometimes extend the name of the Vale to cover all of north-western Berkshire from the Downs to the Thames.

The Vale is dotted with pleasant villages. Wantage is the only town in the heart of the Vale and Faringdon is found on its northwestern rim. Wantage lies in a sheltered hollow at the foot of the hills, no doubt a reason to make it a favoured estate of the Kings of Wessex, and nenarby lie many of the villages of the Vale. Above the villages on the hill slopes are numerous springs bubbling from the chalk, which allowed these settlements to thrive in former times and which fill many little brooks which trickle down to the Ock or by other ways to the Thames.

Sites in the valley

Towards the west, above Uffington, the hills reach a culminating point of 856 feet on White Horse Hill. In its northern flank, just below the summit, a gigantic figure of a horse is cut, the turf removed to show the white chalky soil beneath. This figure gives name to the hill, to the range and to the Vale. The White Horse is 374 feet long and highly stylised.

A panoramic view into the Vale; the White Horse on the right and Dragon Hill centre right

The origin of the figure is unknown. Tradition asserted it to be the monument of a victory over the Danes by King Alfred the Great, who was born at Wantage, but the site of the Battle of Ashdown (871 AD), has been variously located. Moreover, the figure has been dated to the Bronze Age, which pre-dates the battle by many centuries. Many ancient remains occur in the vicinity of the Horse.

Vale scene, with White Horse Hill on the horizon

On the summit of the hill there is an extensive and well preserved circular camp, apparently used by the Romans but of much earlier origin. It is an Iron Age hill fort. It is named Uffington Castle from the village in the vale below. Within a short distance are Hardwell Castle, a near-square work and, on the southern slope of the hills near Ashdown House, a small camp traditionally called Alfred's Castle. Further to the West, there is Liddington Castle. 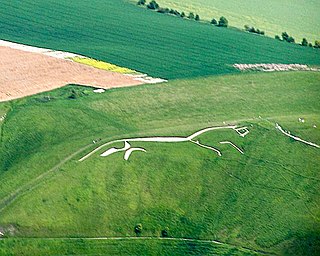 The Uffington White Horse, seen from a glider at 2,000 feet

A smooth, steep gully on the north flank of White Horse Hill is called the Manger, and to the west of it rises a bald mound named Dragon Hill, to which local tradition assigns the scene of St George's victory over the dragon, the blood of which made the ground bare of grass for ever.

To the West of White Horse Hill lies a long barrow called Wayland's Smithy, said to be the home of a smith who was never seen, but who shod the horses of travellers if they were left at the place with payment. The legend is elaborated, and the smith appears as a character, in Sir Walter Scott's novel Kenilworth, and in Rudyard Kipling's Puck of Pook's Hill. The Vale as a whole appears at the beginning of Tom Brown's Schooldays, as the scene of innocent Saxon boyhood adventures, before the eponymous hero is sent away to school at Rugby. Rosemary Sutcliff's 1977 historical novel ‘’Sun Horse, Moon Horse’’ takes place in the vale, telling the tale of the White Horse's creation in ancient celtic times.

The White Horse has been carefully cleared of vegetation from time to time. The figure has remained clear of turf throughout its long existence, except for being covered as a precaution during the Second World War. The cleaning process, known as the Scouring of the White Horse, was formerly made the occasion of a festival. Sports of all kinds were held, and keen rivalry was maintained, not only between the inhabitants of the local villages, but between local champions and those from distant parts of England. The first of such festivals known took place in 1755 and they died out only subsequently to 1857.

A grassy track above the Vale represents the Ridgeway, claimed as the oldest road in Europe, perhaps five thousand years old. It travels along the crest of the hills, far above what would then have been marshy lowlands or dangerous forests, continuing Icknield Street, from the Chilterns to the River Thames.

Other earthworks, in addition to those near the White Horse, overlook the Vale, such as Letcombe Castle (also known as Segsbury Camp) above Wantage. At the foot of the hills, not far east of the Horse, is preserved the so-called Blowing Stone of Kingston Lisle, a mass of sandstone (a sarsen) pierced with holes in such a way that, when blown like a trumpet, it produces a loud note. It is believed that, in earlier times, the stone served the purpose of a bugle.

Each village has its church, many mediæval and standing in the heart of the community. Several of the village churches in the Vale are of interest, notably the fine Early English cruciform building at Uffington that has a rare hexagonal tower. Uffington’s church is known as The Cathedral of the Vale.[1]

Pendon Museum has as its main exhibit an extensive model featuring scale replicas of buildings from the Vale. The Vale used to have a thriving dairy industry, especially in the 1960s. That has dwindled to just a few herds of dairy cattle, in the first years of the 21st century. Farming is now mostly arable.

Natural mineral resources are quarried in the Vale, which include sand, gravel and formerly fuller's earth.

Since the closure of the MG car works at Abingdon, there is no motor industry, apart from some specialist car makers and component factories.

The length of the Vale is traversed by the main line of the Great Western Railway, between Didcot and Swindon. There used to be a station on this line (Challow Station), situated on the A417 road, a little to the East of Stanford in the Vale, but this was closed in the sweeping Beeching Axe, in the early 1960s. The nearest main line stations are now Didcot Parkway and, out of county, Swindon and Oxford.