Uffington is a village and parish in north-western Berkshire, famous for the Uffington White Horse carved into the chalk of the hillside above the village.

Uffington lies in the Vale of White Horse, which is named after Uffington's White Horse and through which runs the River Ock. The village is four miles south of Faringdon, in open country, amongst the Berkshire Downs. The parish forms part of Berkshire's Shrivenham Hundred. 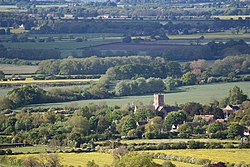 Uffington from the downs

The village is one of chalk-block houses and thatch, at the foot of the White Horse Hills. Like most parishes in the Vale, Uffington parish is long and thin, running north-south, so that it includes both low-lying arable land and grazing upland on the Berkshire Downs. The River Ock forms most of its northern boundary. The western boundary runs up across Dragon Hill, Whitehorse Hill, Uffington Down and the gallops on Woolstone Down before turning north again as the eastern boundary across Kingston Warren Down and Ram's Hill, almost to Fawler and partially along Stutfield Brook. 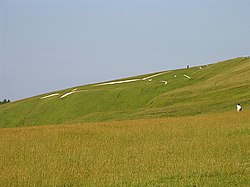 The White Horse on the hill

The White Horse of Uffington shines out in chalk-white from the hill above the village. This enigmatic and much debated hil figure is one of the United Kingdom's best-known archaeological sites

The White Horse is 374 feet long and cut out of the turf on White Horse Hill on the Berkshire Downs, just south of the village of Woolstone. Its origin and purpose are unknown. The leading theories contend that it was cut in the Bronze Age, Some suggest, for want of any other suggestion, that it might have been a religious totem of some kind. A popular theory since the Victorian period is that it was cut by the men of Wessex after the Battle of Ashdown, the location of which is unknown but thought to have been fought nearby.

Other recent theories suggest that the figure might not be a horse at all but a wolf or some other creature, as it is not a lifelike representation of any beast, but for a figure cut by those who could not see the whole effect from the air, it is a remarkable piece of work, more in the spirit of a galloping horse than any realistic portrayal might be.

In G. K. Chesterton's allegorical epic poem of 1911, The Ballad of the White Horse, the horse long predates the victory at Ashdown, but Alfred is then portrayed as being responsible for initiating the custom of the scouring of the horse:

And it fell in the days of Alfred,
In the days of his repose,
That as old customs in his sight
Were a straight road and a steady light,
He bade them keep the White Horse white
As the first plume of the snows.


And right to the red torchlight,
From the trouble of morning grey,
They stripped the White Horse of the grass
As they strip it to this day.


Later, when the Danes invade again, the originally pagan white horse has become rehabilitated as a symbol of English freedom and of Christian civilisation.

"And I go riding against the raid,
And ye know not where I am;
But ye shall know in a day or year,
When one green star of grass grows here;
Chaos has charged you, charger and spear,
Battle-axe and battering-ram.


"And though skies alter and empires melt,
This word shall still be true:
If we would have the horse of old,
Scour ye the horse anew.


"One time I followed a dancing star
That seemed to sing and nod,
And ring upon earth all evil's knell;
But now I wot if ye scour not well
Red rust shall grow on God's great bell
And grass in the streets of God."


In A Hat Full of Sky by Terry Pratchet the ancient figure is carved in the Chalk (on Discworld, but an image of the Berkshire Downs) and Tiffany ponders being told "T'ain't what a horse is, it's what a horse be".

The Ridgeway and ancient mounds

To the south of the Horse are a number of associated burial mounds and there are others further south. Dragon Hill adjoins that on which the horse is carved and might once have been associated withit. It is a small natural hillock with an artificially flattened top. Above these stands Uffington Castle, an Iron Age hill fort (overlying a Bronze Age predecessor) where some of this tribe may have lived.

Just to the south of the hill fort, the ancient trackway thought to be Britain's oldest road, called the Ridgeway, passes through the parish. Ram's Hill seems to have been a Bronze Age cattle ranching and trading centre.

The tower of St Mary's

The parish church is St Mary's and is known as The Cathedral of the Vale.

St Mary's has the rare feature of a hexagonal tower.

A Victorian theory was that the Battle of Ashdown took place in the downs here in 871 and that the White Horse was created as a memorial by King Alfred's men, though few hold to that now, albeitr that the sound of battle might have been close by. Uffington does, however, appear in mid-10th century boundary charters. Abingdon Abbey owned the manor throughout the Middle Ages and King Edward I visited their grange there.

By the 17th century, the area was dominated by the Earls of Craven from Ashdown House and the church suffered during the Civil War because of their Royalist sympathies.

The common lands of Uffington, Baulking and Woolstone were enclosed in 1776.[1]

Sir John Betjeman lived in the village in the 1930s.