Shrivenham is a large village in western Berkshire, close to the boundary with Wiltshire. It is in the Berkshire Downs, between Swindon and Faringdon.

Shrivenham has many thatched cottages, stone walls, an ancient pump and a Norman parish church. It has two traditional and historic public houses, the Barrington Arms and the Prince of Wales. Each year the village holds the Shrivenham Village Fete, which has been an annual event for 30 years.

At the end of Second World War, the United States Army's Information and Educational Branch was ordered to establish an overseas university campus for demobilized American service men and women in Shrivenham. This, and two campuses in Europe, was set up to provide a transition between army life and subsequent attendance at a university in the USA, and therefore students attended for just one term.[1]

Shrivenham has been the site of UK military colleges since 1946 and the establishment of the Royal Military College of Science (RMCS) on the Beckett Estate. This college is now called the Defence College of Management and Technology, which is part of the Defence Academy of the United Kingdom.

Defence Academy of the United Kingdom

The Defence Academy of the United Kingdom provides higher education for personnel in the British Armed Forces, Civil Service, other government departments and service personnel from other nations. The Defence Academy is headquartered at Shrivenham and delivers education and training in a number of sites. The majority of training is postgraduate with many courses being accredited for the award of civilian qualifications. Cranfield University has a strong link with the Defence Academy, being the academic provider at the Defence College of Management and Technology.

The Defence College of Management and Technology (DA-CMT) is a British postgraduate school, research institution and training provider formed in 2009 from five departments of the Defence Academy of the United Kingdom, and as such part of the British Armed Forces. Since 1984 Cranfield University has been the main academic provider of the College. A November 2005 contract extends the Cranfield relationship with DA-CMT to at least 2027.

The Joint Services Command and Staff College (JSCSC) is a military academic establishment providing training and education to experienced officers of the Royal Navy, Army, Royal Air Force, Ministry of Defence Civil Service, and serving officers of other states.

JSCSC combined the single service provision of the British Armed Forces: Royal Naval College, Greenwich, Staff College, Camberley, RAF Staff College, Bracknell and the Joint Service Defence College, Greenwich. Initially formed at Bracknell in 1997, the college moved to a purpose-built facility in the grounds of the Defence Academy of the United Kingdom and is co-located with the Defence College of Management and Technology, Shrivenham.

The Conflict Studies Research Centre (CSRC) is just over the parish boundary in Watchfield. It was part of the Defence Academy and specialised in potential causes of conflict in a wide area ranging from the Baltic to Central Asia. This geographical focus was inherited from the Centre's original incarnation as the Soviet Studies Research Centre (SSRC) in 1972, at Royal Military Academy Sandhurst, examining the Soviet military threat. Renamed in the 1990s, the Centre later examined wider issues including foreign policy, energy security and demographic change.

CSRC hosted a small number of deep country specialists, providing in-house expertise on their subject countries to government and academic customers in the UK and beyond, as well as publishing research in their own right. In 2006, CSRC was absorbed into the Advanced Research and Assessment Group (ARAG), another component of the UK Defence Academy, which was subsequently disbanded.

In May 2010, former research staff of CSRC, laid off at its closure, re-formed the organisation independently of the Ministry of Defence.

The main country estate in Shrivenham is the Beckett Estate. The estate and the Barrington family who lived there were the inspirations for the naming of Becket, Massachusetts and Great Barrington, Massachusetts. It was also the home of Henry Marten, the regicide.

The parish church, St Andrew, was rebuilt in 1638 around the central bell tower that dates from about 1400.[2]

There are signs of the hand of man in Shrivenham from at least 400 BC. The remains of a Roman villa have been uncovered nearby.

Shrivenham functioned for centuries as the centre of the Shrivenham Hundred, though after the 19th century the judicial functions of the hundreds effectively ceased.

The Wilts & Berks Canal from Semington on the Kennet and Avon Canal to Abingdon on the River Thames was built between 1796 and 1810. In 1805 it reached Shrivenham where a wharf was built.[3] Coal delivered by way of Semington to Shrivenham peaked at 601 tons in 1840,[4] when the Great Western Railway was built through the area and opened Shrivenham railway station. Coal deliveries by canal fluctuated through the 1840s and then collapsed from 272 tons in 1850 to only 28 tons in 1852 and none for most years thereafter, except for 27 tons in 1858 and 24 tons in 1864.[4]

The Prince of Wales

Other canal freight also declined, and between 1893 and 1896 just 48 tons were shipped between Shrivenham and Wantage.[5] In 1894–95 Ainsworth, a local canal carrier, handled 23 tons of freight at Shrivenham.[6] By then the canal was increasingly in disrepair, in 1901 the collapse of the Stanley Aqueduct effectively ended the little remaining traffic and in 1914 an Act of Parliament formalised the abandonment of the canal.

Shrivenham railway station continued to serve the parish until British Railways closed it in 1964.

"Most of you have probably travelled down the Great Western Railway as far as Swindon. Those of you who did so with their eyes open have been aware, soon after leaving the Didcot station, of a fine range of chalk hills running parallel with the railway on the left-hand side as you go down, and distant some two or three miles, more or less, from the line. The highest point in the range is the White Horse Hill, which you come in front of just before you stop at the Shrivenham station. If you love English scenery, and have a few hours to spare, you can't do better, the next time you pass, than stop at the Farringdon Road or Shrivenham station, and make your way to that highest point." 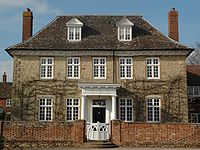