Liddington Castle, locally called Liddington Camp, is a late Bronze Age and early Iron Age hill fort in the north of Wiltshire. It is found on top of Liddington Hill at 909 feet above sea level.

The fort is sited on a commanding high point close to The Ridgeway and covers an area of seven and a half acres. Liddington Castle was one of the earliest hill forts in Britain, with first occupation dating to the 7th century BC. The earthworks consist of a relatively simple oval bank of timber and earth fronted by a ditch, with opposing causewayed entrances on the east and west sides. The western entrance was later blocked off and the eastern one may have been lined with sarsen stones. A palisade of wooden posts may have lined the top of the bank. During a later phase the bank and ditch were improved and a rampart of dumped chalk, excavated from the enlarged ditch, increased the height of the bank.

Excavation within the hill fort revealed a large pit 5 feet in diameter and at least 8 feet deep. The bottom of the feature was not reached and it was interpreted by the archaeologists who dug it as a ritual shaft. Similar shafts have been recorded at Wapley Hill in Herefordshire and Cadbury Castle in Devon. Finds of pottery suggest Liddington Castle was abandoned during the fifth century BC, with perhaps some later re-occupation during the Roman period. 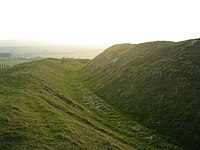 Liddington Castle is sometimes suggested as a possible site of Mount Badon and thus the location of the late fifth-century AD Battle of Mount Badon from Gildas. There is, however, no archaeological evidence to indicate activity during this later period.

Liddington Castle was the favourite haunt of local writer of natural history and rural life, Richard Jefferies, who spent much of his spare time walking through the wide chalk expanses of the Marlborough Downs. It was on this summit that he relates in The Story of My Heart that his unusual sensitivity to nature began to induce in him a powerful inner awakening - a desire for a larger existence or reality.