Ashdown House (also known as Ashdown Park) is a 17th-century country house in Berkshire, in the parish of Ashbury.

The house today belongs to the National Trust, but with limited access as most of the house is privately occupied.

Ashdown House is associated with the "Winter Queen", Elizabeth of Bohemia, the sister of King Charles I, who married William of the Palatinate and went with him to rule in Bohemia when the Protestant nobility there declared the Habsburgs deposed. William remained King of Bohemia for just one winter before the Habsburgs' imperial forces drove him out. Along with his house at Hamstead Marshall, it is said that William, the first Earl of Craven]] built Ashdown for Elizabeth, but she died in 1662 before construction began.[1] Elizabeth's grandson, George of Hanover, succeeded as King of Great Britain in 1714. 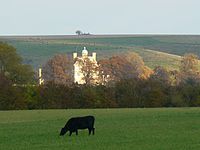 Ashdown House from the northwest

Although the architect is uncertain, it is thought that Craven commissioned Captain William Winde to build the Dutch-style mansion as a hunting lodge and refuge from the plague. The house features 8,000 square feet of living space, a large central staircase, reception rooms, interlinking drawing and sitting rooms, a kitchen, a dining room and eight bedrooms. The property includes two lodges, three cottages and a hundred acres of land. The house is isolated, and the view from the roof includes park-like grounds and gardens, and beyond, woods and pastures. Nearby is a large group of sarsen stones and Alfred's Castle, an Iron Age hill fort.

At least one of the woods of Ashdown Park predates the house. Glastonbury Abbey held the manor of Ashbury until the Dissolution of the Monasteries in 1539.[2] A deer park was established for the Abbey in the south of the parish.[3] It is bounded by an ancient embankment enclosing a rounded area characteristic of Mediæval deer parks.[4] The embankment would have been topped by a park pale, probably of cleft oak stakes.[4] The park may equate to the Aysshen Wood that a terrier of the parish in 1519 recorded as covering 415 acres.[2] The former deer park is now the Upper Wood of Ashdown Park.

Although a few alterations were made to the house, the building remained largely as-built until it was requisitioned for use by the army during Second World War. The occupation left it in a near derelict state.[5]

The National Trust has owned Ashdown House since 1956 when it was donated to the trust by Cornelia, Countess of Craven. The house is tenanted, and has been renovated by recent lease holders. In 2010 Pete Townshend bought a 41-year lease on the property[6][7] and in 2011 a structural renovation was begun.

Public access is restricted to the stairs and roof, with broad views of Berkshire Downs. There is also public access to the neighbouring Ashdown Woods. Admission is by guided tour daily from April to October.