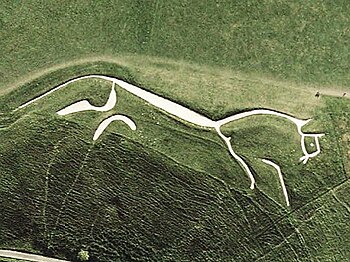 The White Horse of Uffington is a large, prehistoric hill figure inscribed upon the scarp slope of White Horse Hill in Berkshire. Fully 375 feet long, the figure is a highly stylized horse visible for many miles around, formed from deep trenches filled with crushed white chalk.

Best views of the figure are obtained from the air, or from directly across the Vale, particularly around the villages of Great Coxwell, Longcot and Fernham. The site is owned and managed by the National Trust and is a Scheduled Ancient Monument.[1]

White Horse Hill forms a part of the scarp of the Berkshire Downs and overlooks the Vale of White Horse to the north.

The hill is used by the local Paragliding and Hang Gliding Club.

The figure presumably dates to "the later prehistory", which is to say the Iron Age (800 BC–AD 100) or the late Bronze Age (1000–700 BC). This view was generally held by scholars even before the 1990s, based on the similarity of the horse's design to comparable figures in Celtic art, and it was confirmed following a 1990 excavation led by Simon Palmer and David Miles of the Oxford Archaeological Unit, following which deposits of fine silt removed from the horse's 'beak' were scientifically dated to the late Bronze Age.[2]

Iron Age coins that bear a representation comparable to the Uffington White Horse have been found, supporting the early dating of this artifact; it has also been suggested that the horse had been fashioned in the Anglo-Saxon period, more particularly during Alfred's reign, but there is no positive evidence to support this and the view is classified as "folklore" by Darvill (1996).

The head of the horse, with sheep grazing round it

Numerous other prominent prehistoric sites are located nearby, notably Wayland's Smithy, a long barrow just over a mile to the west. The Uffington horse is by far the oldest of the white horse figures in Britain, and is of an entirely different design from the others.[3]

It has long been debated whether the chalk figure was intended to represent a horse or some other animal. However, it has been called a horse since the 11th century at least. A cartulary of Abingdon Abbey, compiled between 1072 and 1084, refers to "mons albi equi" at Uffington ("the White Horse Hill").[4]

The mediæval Welsh book, Llyfr Coch Hergest [The Red Book of Hergest], circa 1400, states "Gerllaw tref Abinton y mae mynydd ac eilun march arno a gwyn ydiw. Ni thyf dim arno." which translates as "Near to the town of Abinton [Abingdon] there is a mountain with a figure of a stallion upon it and it is white. Nothing grows upon it." [5]

The horse is thought by some to represent a tribal symbol perhaps connected with the builders of Uffington Castle.

The horse is quite similar to horses depicted on Celtic coinage, the currency of the indigenous, pre-Roman-British population, and the Marlborough bucket.

Until the late 19th century the horse was scoured every seven years as part of a more general local fair held on the hill. When regular cleaning is halted the figure quickly becomes obscured; it has always needed frequent work for the figure to remain visible.

In March 2012, as part of a pre-Cheltenham Festival publicity stunt, a bookmaker added a large jockey to the figure.[7]

The Folkestone White Horse in Kent, is based on this horse.

Nearby features and recent events

The Manger, the White Horse and Dragon Hill 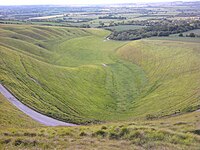 The Manger from the White Horse

The most significant nearby feature is the Iron Age Uffington Castle, on higher ground atop a knoll above the White Horse.[8] This hillfort comprises an area of approximately seven acres enclosed by a single, well-preserved bank and ditch. Dragon Hill is a natural chalk hill with an artificial flat top, associated in legend with St George.[9]

Whitehorse Hill is designated a Site of Special Scientific Interest (SSSI). It is a geological SSSI due to its Pleistocene sediments, and a biological SSSI as it has one of the few remaining unploughed grasslands along the chalk escarpment in Berkshire.[10][11] 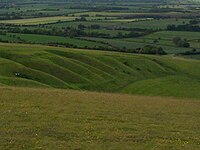 To the west are ice-cut terraces known as the "Giant's Stair".[12] Some believe these terraces at the bottom of this valley are the result of mediæval farming, or alternatively were used for early farming after being formed by natural processes. The steep sided dry valley below the horse is known as the Manger and legend says that the horse grazes there at night.

The Blowing Stone, a perforated sarsen stone, which lies in a garden in Kingston Lisle, two kilometres away and which produces a musical tone when blown through, is thought possibly to have been moved from the White Horse site, in 1750.