Swineshead is a village and parish in Lincolnshire, approximately seven miles west of the town of Boston. The population of the civil parish including Baythorpe was 2,810 at the 2011 census.[1] The parish includes the areas of Swineshead Bridge and North End to the north, Fenhouses and Blackjack to the east, and Drayton to the south.

A mediæval motte castle is believed to have been constructed in the 12th century by the de Gresley family, lords of the manor of Swineshead at Manwar Ings. The remains of the castle are visible as substantial earthworks, which are a scheduled monument. The easiest access to the motte is by turning off the A52 at the Manor Farm Shop which is located in the Baythorpe region of the village.[4][5]

Swineshead railway station opened in 1847 as part of the Sleaford and Boston Railway.[6] It is served by trains from Nottingham to Skegness.

Swineshead falls within the drainage area of the Black Sluice Internal Drainage Board.[7] The A17 road used to pass through the village but now passes to the west. The A52 passes close to the east.

The village has various shops, a post office, a pharmacy and a medical centre.[8] Public houses include the Wheatsheaf, which is a Grade-II listed building dating from the 18th century, and the Green Dragon.[9] The village primary school is St Mary's Church of England Primary School.[10]

Hardwick House is built on the site of a mediæval moated house, possibly a grange, originally owned by Swineshead Abbey, and was listed in the crown bailiff's report when the abbey was dissolved in 1534.[11] 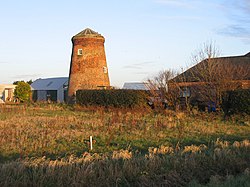 The Wesleyan Methodists built a chapel in Swineshead in 1845, which was converted into a Sunday School after a new chapel was built in 1908. This was demolished in 1986 and the former chapel reverted to its original use, and is now a Grade-II listed building.[14][15] 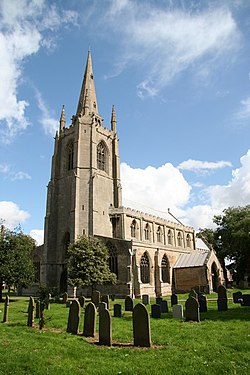 The parish church is a Grade-I listed building dedicated to Saint Mary, and dates from the 12th century with later additions and alterations. The chancel was rebuilt in 1848 by Stephen Lavin. The western tower and font are 14th-century. In the chancel is a black-marble wall-plaque to Sir John Lockton of Swineshead Abbey, who died in 1610.[16]

Swineshead Abbey was founded in 1135 as a Savigniac monastery, but in 1147 was converted to Cistercian by Robert de Gresley. In 1536 it was dissolved and the building of a private house and a park in 1607 destroyed the last traces of it. The site is a scheduled monument.[17][18]

Swineshead is the birthplace of Herbert Ingram, founder of the Illustrated London News and MP for Boston, who was instrumental in bringing the railways and fresh piped water to the village. His son became a lord, and the family were given the Ingram Baronetcy of Swineshead Abbey. Further notable people associated with the village are the abbot, Gilbert of Hoyland, and the goalkeeper Chris Woods.