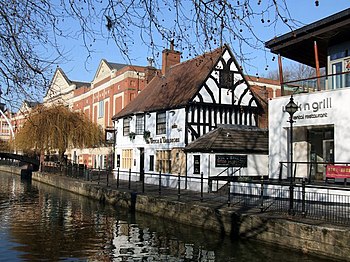 The Witham in Lincoln

Houses by the Witham

The River Witham is a river almost entirely in Lincolnshire and which sweeps in a long loop from the south to the north and again to the south to see a great deal of that county.

The Witham rises south of Grantham close to South Witham at SK8818, passes Lincoln at SK9771 and at Boston, TF3244, flows into The Haven, a tidal arm of The Wash (near RSPB Frampton Marsh).

In its early course, the Witham marks the border with Nottinghamshire, and flows north in the gentle country of the east of Kesteven. It is a broad river by the time it reaches the county town, Lincoln, where its course turns east and lies in the heart of that city, dividing it north and south. Here the Witham bursts through the constraining wall of the Lincoln Edge and crosses to the other side of the county, and flows south through Holland down to Boston, and it is the tidal river here, known as "The Haven", which made Boston in its day a major port.

The name "Witham" on its face looks very English, but research has suggested that it is extremely old.[1] It is believed to predate Anglo-Saxon, Roman, and even British influence.[1]

The meaning is not known.[2]

The river, the fen and the sea 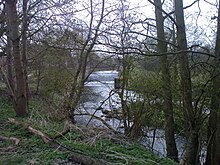 The Witham at Saltersford Bridge a mile south of Grantham

From 1142 onwards, sluices were constructed to prevent flooding by the sea, and this culminated in the Great Sluice, which was constructed in 1766. It maintained river levels above Boston, and helped to scour the channel below it. The land through which the lower river runs has been the subject of much land drainage, and many drains are connected to the Witham by flood doors, which block them off if river levels rise rapidly.

The river is navigable from Brayford Pool in Lincoln to Boston, with Locks only in Lincoln and at the Grand Sluice. Passage through the Grand Sluice lock is restricted to short periods when the tidal levels are suitable. The river provides access for boaters to the Witham Navigable Drains, to the north of Boston, and to the South Forty-Foot Drain to the south, which was reopened as part of the Fens Waterways Link, a project to link the river to the River Nene near Peterborough. From Brayford Pool, the Fossdyke Navigation still links to the River Trent. 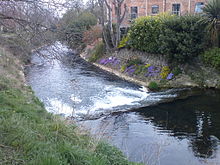 The Witham at New Somerby, Grantham

The source of the River is in South Witham, Lincolnshire, whence it flows generally north until it reaches Lincoln. the upper waters are important for agricultural water extraction, and also for coarse fish such as roach, common bream and pike; small mammals like Water Voles, and native crayfish.

From near Claypole to Beckingham, a distance of about three miles, the river forms the border between Lincolnshire and Nottinghamshire. From North Witham to Long Bennington, the river largely follows the line of the A1 road, which crosses the river just north of the B6403 junction near Easton.

In Lincoln, the river flows into Brayford Pool and exits along a narrow channel that passes under the mediæval High Bridge.[3] The bridge not only restricts navigation due to its small size, but the volume of water that can pass through the gap is limited in times of flood. This is alleviated by the Syncil Dyke, which leaves the main channel at Bargate Weir and runs for a mile and a half through the industrial areas to the south of the main city centre. It used to rejoin the main channel at Stamp End, but was re-routed into the South Delph, a drainage ditch constructed by John Rennie the Elder in the early 19th century that joins the main channel below Bardney lock. The origins of the Sincil Dyke are unknown, but it is known to have been used as a drainage channel in the mid-13th century and is thought to be pre-mediæval or even Roman. Parts of it were culverted in 1847 to allow the construction of Lincoln Central railway station.[4]

A long-distance footpath, the Water Rail Way, follows the course of the river from Lincoln to Boston. The path uses sections of the river towpath and abandoned railway tracks, and has been opened in stages, with the final two miles completed in September 2008. The path is now part of Route 1 of the National Cycle Network and features a number of sculptures along its length, each commissioned from local artists.[5] They include Lincoln longwool sheep at Stixwould, Lincoln red cows at Washingborough, and Lincoln curly pigs, which became extinct in 1972, at Southrey.[6]

The Haven and the Boston Stump, at low tide

From Dogdyke near Coningsby to Boston, the north bank of the river was used by a section of the Great Northern Railway from Lincoln to Boston.

The Haven at low tide

The following flow into The Haven:

Archaeological and documentary evidence shows the importance of the Witham as a navigation from the Iron Age onwards. Artefacts such as the Witham Shield[7] and Fiskerton Boat[8] have been recovered[9] and are on display at the British Museum in London or The Collection in Lincoln.[10] From Roman times the river was navigable to Lincoln, from where the Fossdyke was constructed to link it to the River Trent. The mouth of the river moved in 1014 following severe flooding, and Boston became important as a port.

The Witham, which was originally tidal up to Lincoln, was an important navigation in Roman times. Lincoln (Lindum), the meeting point of Ermine Street, joining London to York, and Fosse Way, leading to Leicester and Bath, was an important Roman fort that became one of only four colonia in Britain. Most important Roman cities were situated near navigable water, which enabled goods to be transported in bulk, but Lincoln did not possess this advantage, and so the Romans constructed the Fossdyke from Lincoln to Torksey on the River Trent, improved the River Witham from Lincoln to The Wash, and built the Car Dyke from Lincoln to the River Cam near Cambridge.[11] The Witham thus gave Lincoln access to the east coast, while the Fossdyke gave access to the Trent and further on to the Humber.

Trading continued throughout the Middle Ages, evidenced by the importance of Torksey, which was then a flourishing town, now only a small village. However, the Fossdyke needed much maintenance to keep it clear of silt. Henry I had overseen the scouring of its channel, and there were inquiries in 1335, 1365 and 1518 to consider the state of the Fossdyke and to compel the inhabitants of the region to maintain it. Lincoln was a centre for the collection of business taxes, but this came at the cost of maintaining the waterways, and having finally decided it was too large a cost, James I presented the Fossdyke to the City of Lincoln.[12]

The Witham originally flowed into The Wash at Bicker Haven, where the port of Drayton was established in the Welland estuary, and it was only as a result of massive flooding in 1014 that it diverted itself to flow into the Haven at Boston. This gave rise to the growth of Boston as a port in the 12th and 13th centuries, exporting wool and salt to the Hanseatic League, though Boston only received its charter in 1545.

The river was affected by silting which restricted trade despite the construction of various sluices and barriers from 1142 onwards, when the first sluice was built below Boston.[13] Other sluices were erected at Boston in 1500 and at Langrick in 1543, but navigation was again difficult on both the river and the Fossdyke by 1660.[14]

In 1671 an Act of Parliament was obtained for the improvement of the Navigation.[15] In the Eighteenth Century plans for improvements and a new cut were pushed forward, which were finished in 1768. The Grand Sluice was a major construction which maintained the height of water above Boston to near normal high tide level and had massive flood gates to cope with any tides above this. It was completed in 1766[16] and was effective in scouring the Haven below it, but actually encouraged further silting of the river above it.

The Witham Drainage General Commissioners were created and continued to promote drainage schemes actively,[17] creating a drainage network known as the Witham Navigable Drains that transformed much of northern Lincolnshire from fen to farming land. Today many of these channels are managed by the Witham First, Third and Fourth District Internal Drainage Boards and Upper Witham Internal Drainage Board. These four internal drainage boards reduce the flood risk to the surrounding properties, land and environment. 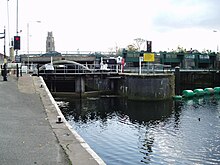 The Grand Sluice at Boston

When completed in 1766, Edwards' Grand Sluice consisted of three channels each 17 feet wide, fitted with pointed gates on both sides, and a lock adjacent to the north bank, which could be used as an additional flood relief channel if required.[16] The lock was originally very small, but was lengthened to its current 41 feet by 12 feet[18] in 1881. The pointed doors on the non-tidal side of the sluice were replaced by steel guillotine gates between 1979 and 1982.[16]

Today, commercial traffic, apart from tour boats, has ceased above the port of Boston (The Haven) and only pleasure craft carry on through the lock at the Grand Sluice into the Witham. Although the lock is only 41 feet long, it is possible for longer boats to pass through it at certain states of the tide. Unlike many such sea locks, the reverse-facing gates close on every tide, as the normal high tide water level is higher than the level of the river, while at low tides there is insufficient water in the Haven to allow exit from the lock. Passage is therefore restricted to a brief period approximately two hours before or after high water.[18] It is still possible to navigate many of the drains in small vessels, and a new lock, completed in December 2008, provides entry to the South Forty-Foot Drain from below the Grand Sluice so that vessels will be able to reach the Fens without venturing out to the Wash[19] as part of the Fens Waterways Link.

The Witham is navigable from Brayford Wharf in Lincoln to Boston. There are two locks between Boston and Lincoln – one at Bardney and the other in Lincoln itself, the Stamp End Lock which is unusually a guillotine lock.[3] The main obstruction to navigation is the High Bridge or Glory Hole in Lincoln, a mediæval structure which is only about 15 feet wide and 8ft 6in high at normal river levels. In times of flood it is unnavigable. The bridge spans the river for 87 feet, and consists of an arch built in c1160, with extensions added in 1235, 1540 to 1550 and 1762/3. It is the only British bridge which still has secular mediæval buildings standing on it, and is believed to be the second oldest masonry arch bridge in the country. It is currently a Scheduled Ancient Monument and a Grade-I Listed Building.

There are a number of drains that connect to the River Witham and that are protected by flood doors. These consist of a single pair of mitre gates that are designed to close if the level in the river rises above the level in the drain. Several of these are navigable to the more adventurous boater.[21] The river is also joined by the Kyme Eau, which connects to the Sleaford Navigation on which navigation will eventually be restored to Sleaford. At Antons Gowt, a lock drops down into the Witham Navigable Drains, a system of drainage ditches which are used to prevent flooding of the fens to the north of Boston. Since November 2008 there has been an active campaign by the Billinghay Skirth Regeneration Society to restore navigation on the River Skirth, and the project has won the support of Billinghay and other parish councils, the Inland Waterways Association, the Environment Agency, Lincolnshire County Council and the Lincolnshire Waterways Partnership.[22]