Fosdyke is a village and parish in Holland, Lincolnshire. The population of the civil parish at the 2011 census was 480.[1] It is situated approximately seven miles south from Boston, just off the A17, and two miles east from the junction of the A17 with the A16.

Fosdyke's Grade II-listed Anglican church is dedicated to All Saints.[3] In 1871-72 the church was entirely rebuilt in brick[4] on the site of an older church, in an Early English style.[5] In 1885 Kelly's Directory reported the existence of a Primitive Methodist chapel, a coastguard station, and a 100-year-old almshouse, founded by Sir Thomas Middlecott for the Fosdyke and Algarkirk parishes.[5]

The village is near the mouth of the River Welland, and the parish extends across the river to include both ends of the hamlet of Fosdyke Bridge.

Fosdyke Wash, the marshy area at the mouth of the Welland, is shown by Ordnance Survey as the nearest coastal location to Coton in the Elms in Derbyshire, which is the furthest point from the sea in Great Britain, 70 miles away.[6] 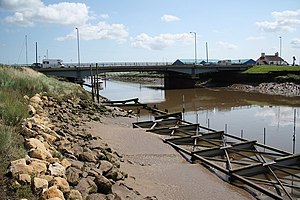 Fosdyke Bridge carrying the A17 over the Welland

Fosdyke has a village hall. There are no shops, and the nearest post office is in Sutterton. The only remaining public house close to the village is The Ship at Fosdyke Bridge; other pubs in the local area have closed. The only establishment within the village now providing alcoholic drinks is the Fosdyke Sports & Social Club, with facilities for pool, poker and darts. The playing field, used by Fosdyke Football Club, has an enclosed multisport area (opened in 2009), used for five-a-side football, basketball and volleyball. Adjacent to the social club building is a children's adventure playground. Situated at the end of the playing field is a bowls club, which moved to Fosdyke in 1991. Businesses include builders, handymen, and producers of fruit and vegetables.

Next to Fosdyke Bridge and The Ship public house is the privately owned Fosdyke Yacht Haven, a pleasure boat marina and boat yard, developed from a previous commercial port. The marina has dry land facilities for sailing craft.[7][8]