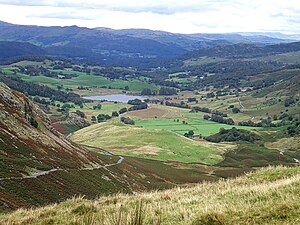 Little Langdale is a valley in Westmorland, and within the Lake District, watered by the upper reaches of the River Brathay, running down to Elter Water on the Lancashire boundary, where the dale is joined by its larger cousin coming from the north, Great Langdale.

Little Langdale is flanked on the south and southwest by Wetherlam and Swirl How, and to the north and northwest by Lingmoor Fell and Pike of Blisco. The valley descends to join with Great Langdale above Elter Water. 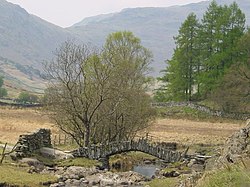 Slater Bridge on the route between Little Langdale and Tilberthwaite

Historically Little Langdale was at the intersection of packhorse routes leading to Ravenglass, Whitehaven, Keswick, Penrith and Carlisle in Cumberland to the west and north and Ambleside in Westmorland to the east, and Hawkshead Coniston, Ulverston, Broughton-in-Furness and Barrow in Furness in Lancashire beyond.

Slater's Bridge which crosses the River Brathay in 3 spans supported by a large mid-stream boulder and stone causeways is a 16th-century,[1] slate-built, former packhorse bridge on one of these routes.[2] Today metalled roads from Little Langdale lead west over Wrynose Pass and Hardknott towards Eskdale, northwest by Blea Tarn to Great Langdale, northeast to Elterwater and east to the Skelwith Bridge to Coniston road.

The National Cycle Network’s Regional Route 37 between Ambleside and Ulverston runs through the valley.

The National Trust owns many farms and areas of land in the valley, many of which date from the 17th century. Other than the farms and houses the village also has a post office and an inn. The Three Shires Inn was built in 1872 and is named after the Three Shires Stone two miles away.[3]

Little Langdale was the filming location for the 2012 film Snow White and the Huntsman.

Little Langdale has been heavily mined and quarried over the last several hundred years particularly for copper and slate although there is little activity there at present. Workings in the vicinity include the extensive slate quarries at Hodge Close, Tilberthwaite and the mines on the southern slopes of Wetherlam. A nearby mine at Hawk Rigg possibly dates from the Elizabethan era[4] and it was reported in 1709 that iron ore was mined in the area. Slate mining particularly boomed in the area in the Victorian Era after the introduction of compressed air drills for making the blast holes, and continued until the introduction of high quality bricks for building.[1]

The rock in the valley is generally Borrowdale tuff and rhyolite with andesite sills with areas of slate, particularly to the south. 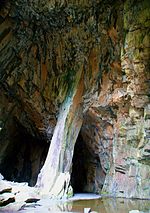 The large pillar in 'The Cathedral'

Cathedral Quarries (NY308028) are a set of disused inter-linked quarries for green slate, above the valley in Atkinson Coppice. The quarry site is now managed by the National Trust and can be entered by the public. It features various chambers and tunnels, including one which is 400 feet long. The quarry's main attraction, 'The Cathedral', is a 40-foot high main chamber lit by two windows with a huge rock pillar supporting the roof. Some of the quarry smaller chambers are closed off for safety or have already collapsed.

The quarry features at least 25 named rock climbing routes that are graded 'Extreme'.[5][6] 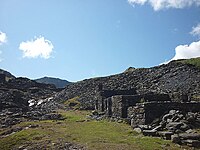 Greenburn Mine (also known as New Coniston Mine), close to Greenburn Beck and the disused Greenburn reservoir, is 'widely regarded as the best preserved copper mine in the Lake District.'[7] The mine was mostly worked in the mid-19th century but may have been operated from the late 17th century.[8] It closed in 1865 but later re-opened with activity possibly until 1940.[9]

The mine workings featured the large Engine Shaft with winding and pumping gear powered by a 30-foot overshot waterwheel,[10] various other shafts and adits, a spalling floor, a crushing mill powered by a second water-wheel, an inclined tramways and two precipitation tanks. There are remains of buildings including a smithy, office, two-storey accommodation block, dry store & miners' changing house and explosives store.

The valley has a long history of inhabitation, a socketed Bronze Age axe was found on Low Fell above Greenburn Beck in 1961[11] and remains of an Iron Age nucleated hillfort have been found at Castle Howe - a small mound of volcanic rock - including a hut circle and ditches cut into the rock.[12] More recent research disagrees that it was ever a hillfort.[1]

The Ting Mound at Fellfoot Farm is a deliberately terraced mound situated close to the Roman road and other transport routes. It is believed that it was used as an open-air meeting place for local government, possibly established by Norse settlers for a Þing. Its appearance around the end of the 19th century was described by H.S. Cowper and painted by W G Collingwood.[13]

There are remains of mediæval dispersed settlements, with stone-walled houses at Seven Intakes and of a mediæval farmstead with a kiln, possibly for corn-drying, close by at Long Intakes.[14] Other possible mediæval remains have been found nearby in the valley. Almost all the stone from these buildings has been re-used as dry stone walls.[1]

Many farmhouses in the area date from the 17th century. A chapel is said to have once stood close to the Bield and Tarn at Chapel Mire.[15]

The Bield is a 17th-century farmhouse in the dale.[16] It was home to the Brazilian sculptress Josefina de Vasconcellos for much of her life and Margaret Cropper (1886-1980), "the most underrated Cumbrian poet of the twentieth century" lived at Bridge End.[17][18]