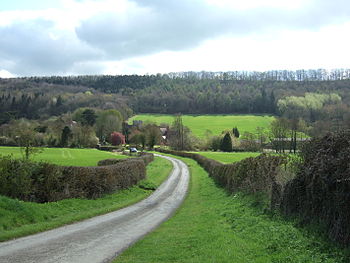 The Edge at Eaton under Heywood 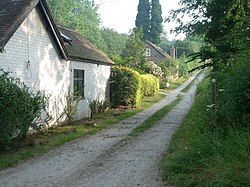 Wenlock Edge is a limestone escarpment in Shropshire running 15 miles from near Much Wenlock south-westward towards Craven Arms.

Wenlock Edge is roughly 1,100 feet above sea level. The deciduous woodland which runs along it covers much of the steep slopes of the escarpment and in parts it is very well preserved.

The edge has been celebrated in verse and music. It is the setting for A E Housman's poem "On Wenlock Edge the Wood's in Trouble". Ralph Vaughan Williams too composed 'On Wenlock Edge' in 1909. It is also the subject of several works by the famous artist L S Lowry with the best known piece "A Bit of Wenlock Edge" which is a fine pencil drawing of the escarpment detailing the woodland.

It was featured on the 2005 TV programme Seven Natural Wonders as one of the wonders of the Midlands.

Wenlock Edge contains many interesting features such as Flounder's Folly, Wilderhope Manor and Shipton Hall and waymarked walks such as the Shropshire Way and bridleways such as the Jack Mytton Way. It is a popular area for hillwalking, cycling, mountain biking and horseriding and is also frequented by tourists and sightseers.

Robert Hart created a model forest garden from a small orchard on his farm called Highwood Hill in Wenlock Edge.[1]

Local legend tells of a local robber and bandit named Ippikin, who buried his ill-gotten gains in the vicinity of the edge. Tales tell that should anyone stand on the escarpment and say "Ippikin, Ippikin, keep away with your long chin" that they will be pushed over the edge by the ghost of the erstwhile villain.

In the English Civil War a Major Thomas Smallman of nearby Wilderhope Manor was a Royalist officer who was forced to flee from Cromwell’s approaching troops after escaping from his manor. As he was carrying important dispatches, he was cornered on the Wenlock Edge. Rather than surrender, he galloped his horse off the edge falling some 200 feet. Smallman's horse was killed in the plunge but the Major was saved by falling into an apple tree. He made his way on foot to Shrewsbury where he delivered the despatches.

The area where Major Smallman made the jump is known as Major's Leap and is said to be haunted by the Major and his horse.