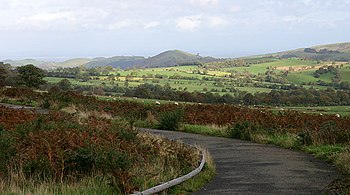 From below the Stiperstones looking NE towards The Hollies

The Shropshire Hills are a group of hills which lie wholly within the county after which they are named, and this collection encompasses several distinctive hils which provide well-known landmarks, such as the Long Mynd, Wenlock Edge, The Wrekin and the Clees.

The Shropshire Hills lie south of the county town, Shrewsbury, east of the boundaries of Shropshire with Montgomeryshire and Radnorshire, Much Wenlock to the north and extending as far south as Ludlow. To the north they are bounded by the broad plain known as the Shropshire, Cheshire and Staffordshire Plain, and to the east the Severn Valley. The hills merge into the hills of Herefordshire in the south, but the southern bounds of the distinctive range may be reckoned at the Teme Valley to the south-east and the Clun Forest to the south-west.

The hills extend for some 30 miles from north to south and east to west. The dominant pattern of the hills is a series of south-west to north-east ridges, scarps and valleys. They are characterized by steep, rounded 'whaleback' hills, often crowned with open moorland, with woodland dressing the steeper slopes. There are scattered farms in dales and sheltering in valleys; larger settlements being confined to the Stretton Valley below the Long Mynd and A49 corridor.[1]

Its major watercourses are the rivers Corve, Onny, Severn and Teme and the Ledwyche and Rea Brooks. The average elevation is 275 ft; the highest point is Brown Clee Hill at 1,752 ft.[2]

The Shropshire Hills are covered in regulations and designations from earnest conservancy bodies. Natural England list then as "Natural Area No. 42" and also as "National Character Area 65": the NCA covers an area of 417 square miles and measures around 30 miles from west to east and north to south, which is a fair measure of the hills.

Roughly a half of the NCA lies within the "Shropshire Hills Area of Outstanding Natural Beauty". In addition, the region contains two Special Areas of Conservation (The Stiperstones & The Hollies SAC; Downton Gorge SAC) and a National Nature Reserve (The Stiperstones NNR) as well as 73 Sites of Special Scientific Interest, the latter totalling 12,000 acres.

In addition, several areas of the Shropshire Hills are owned by the National Trust.