The Long Mynd is a long hill ridge in Shropshire, amongst the Shropshire Hills, ten miles south of the county town, Shrewsbury. The form of the hill is a grand example of the ridge formations found in western Shropshire and Herefordshire; it is seven miles long stretching north to south and has a maximum of three miles wide but is mostly far narrower. Its scarp slope is on the east and drops steeply to the line of the Church Stretton Fault, the escarpment marked by little valleys. Church Stretton sits at the foot of the escarpment.

The whole of the Long Mynd covers roughly an area of 8½ square miles, most of which takes the form of a heathland plateau. Most of the land on the Long Mynd is owned by the National Trust.

The Long Mynd stands between the Stiperstones range to the west and the Stretton Hills and Wenlock Edge to the east. The eastern edge of the Mynd has many steep valleys, though its western slope rises in a steep escarpment above the wide valley of the River East Onny. The villages surrounding the Long Mynd are the Strettons (Church Stretton, Little Stretton and All Stretton), Pulverbatch, Smethcott, Woolstaston, Asterton, Myndtown, Wentnor and Ratlinghope.

The highest point on the Long Mynd is Pole Bank at a height of 1,693 feet.

The typical plant life on the Long Mynd is heather, rushes, and grasses. The wildlife includes ponies, sheep, bats and wild birds, including the rare ring ouzel.

The name Long Mynd means "Long Mountain", from the Welsh mynydd. In Welsh the hill is called Mynydd Hir.

The primary rock of the Long Mynd is sandstone, usually coloured purple or grey. The geology dates back to Precambrian, when tectonic activity caused volcanoes to form, depositing ash in layers between the coastal sand and mud and raising the nearby Stretton Hills and the Wrekin. There are layers in the rocks of the Long Mynd that have preserved raindrop marks recording a passing rain shower, when rain fell onto a layer of firm dry mud, and were then covered by another layer of mud, which filled them in and preserved them for 565 million years. Examples of these fossilised rain prints can be viewed today in the National Trust Tearoom Exhibition, in Carding Mill Valley. The layers of rock built up over the millennia to create a layer approximately 23,000 feet thick composed of sand, mud, silt, and ash.

Towards the end of the Precambrian period, the Church Stretton Fault line was created, which is still active; the hill Caer Caradoc adjacent to the Long Mynd and from the same time is more volcanic in origin, and is thought to be the remnants of the great mountain chain.

In later geological ages, seas flooded over Shropshire, which times are represented in the fossil trilobites, corals and shellfish found all along the Edge, preserved in limestone. Towards the end of the Silurian Age the Iapetus Ocean closed, joinig Britain together and causing the Shropshire hills to align along the fault, northeast to the southwest.

The last Ice Age carved today's landscape, putting the Long Mynd under a thick ice sheet, several hundred yards thick. As the ice melted, it carved out the valleys and hills of the Long Mynd massif we see today. The small rivers, streams and brooks still very slowly carve out the valleys. The springs and bogs play a part in Church Stretton's economy, as the people bottle the mineral water that comes from the Long Mynd.

The Bronze Age period is by far the most recorded period of time on the Long Mynd. There are dozens of tumuli on the moorland. Some are small, such as the remains of chamber tombs, while some dykes and barrows on the hill can be quite large. Bronze Age features include:

During the 18th century, Church Stretton began to grow in the wide valley between the Long Mynd and Caer Caradoc, as a Spa town. Historically the town was known for its textiles, specifically in Cardingmill Valley. Carding Mill was built in the 18th century, and named after a stage in making cloth, the three stages being carding, spinning, and weaving. Carding would have been done by children, and involved using a hand-card that removed and untangled short fibres from the mass of raw material. The cards were wooden blocks with handles and covered in metal spikes, which were angled, (to make it easier to untangle) and set in leather. When untangled, the material would be spun, and then weaved into the final product. The Mill is still in the valley today, but has been converted into luxury apartments. The Long Mynd Hotel in Church Stretton was built in 1900, originally as the Hydro, at a time when the town was popular as a spa.

A large area of the Long Mynd (almost all its upland area) was bought by the National Trust in 1965, and was designated part of the "Shropshire Hills Area of Outstanding natural Beauty" in 1958. 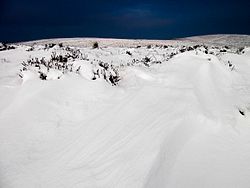 The Wild Moor during wintry conditions

The Long Mynd comprises many hills and moors. From the summit of nearly every hill, extensive views of the surrounding area and surrounding counties can be seen. North, you can see as far as Cheshire; West commands views over the Stiperstones, and the Cambrian Mountains and Berwyn Mountains, and as far as Snowdonia on clear days. The views eastward are obscured by other areas of the Shropshire Hills, Caer Caradoc, The Wrekin, and the Clee Hills. However, depending on your location on the Long Mynd, views of the Black Country can be seen. Views South show the Clun Forest, and towards the Craven Arms and Ludlow. 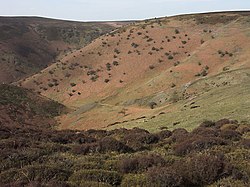 Barristers Batch on the eastern flank of the Long Mynd 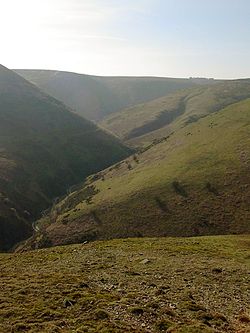 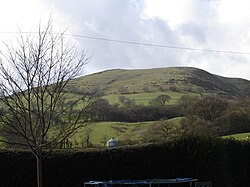 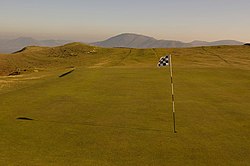 From the highest green on the golf course

Dozens of valleys carve their way down the surface of the Long Mynd, many of which bear the name 'Hollow' or 'Batch' or 'Dale'. The highest concentration of valleys is on the eastern edge of the Long Mynd, near Church Stretton. The geography of the valleys has many of the larger ones adjacent to each other, running northwest to southeast. The main valleys are listed below in alphabetical order:

The area is popular with tourists, and there are many fine walks in the area. Two major walks are the Shropshire Way and the Jack Mytton Way. The Long Mynd is also used for horse riding and mountain biking on the bridleways.

Of the many valleys on the Long Mynd, the most popular is Cardingmill Valley, which has a road directly connected to Church Stretton, and is the National Trust's centre for the area.

The windward slopes are popular with glider, hang-glider and paraglider pilots.

During wintry conditions, some valleys are used as makeshift ski slopes. While highly attractive in good conditions, the Long Mynd can be treacherous in severe weather, and has claimed many lives.

The Longmynd hike is a 50-mile competitive hike that must be completed in under 24 hours. It takes place annually, usually in the first weekend in October. It crosses over the Long Mynd twice, taking in Pole Bank along its course. The hike has been running since 1967.

There is a golf course, the Church Stretton Golf Club, situated near the Cardingmill Valley, on slopes of Stanyeld Hill and Bodbury Hill. The clubhouse is at approximately 755 feet above sea level and the hilly links course rises up to around 1,230 feet. It is the oldest 18-hole golf course in Shropshire, opened in 1898, and one of the highest in the country.

The Long Mynd has been home to the Midland Gliding Club since 1934. The club owns 336 acres of land on the south end and flies gliders there throughout the year. It runs residential training courses and offers trial lesson flights to members of the public. Many long flights have started from the Long Mynd, most recently one of 405 nautical miles during the summer of 2007. Midland Gliding Club is one of the last clubs in Europe to regularly launch gliders by bungee.

The Revd E. D. Carr's A Night in the Snow describes his experience, in 1865, of surviving a winter's night on the Long Mynd when attempting to walk home after conducting a Sunday service and visiting an isolated parishioner. He spent 23 hours struggling to force a route back to civilisation.

The Long Mynd features in literature in the poetry of A. E. Housman, the novels of Mary Webb (in particular Gone To Earth), and Malcolm Saville's Lone Pine series for children.