Titterstone Clee Hill, sometimes referred to as Titterstone Clee is a prominent hill in Shropshire, rising at the summit to 1,749 feet above sea level. It is one of the Clee Hills, in the wider Shropshire Hills Area of Outstanding Natural Beauty; the southern peak in the long ridge running north to its peak on Brown Clee Hill, Shropshire's county top.

The nearest town to the hill is Ludlow.

Titterstone Clee is the third-highest hill in Shropshire, beaten only by the nearby Brown Clee Hill (1,772 feet) and Stiperstones (1,759 feet).

Much of the higher part of the hill is common land, used for the grazing of sheep, air traffic control services and both working and disused quarries. The summit of Titterstone Clee is bleak, treeless and shaped by decades of quarrying. Many of the industrial structures still remain, and lend to the ghostly atmosphere of the hill top, especially during the prolonged winter fogs that descend over these hills.

Investigations have led to some individuals to claim that Titterstone Clee was once an active volcano. However, this was conclusively shown to be incorrect in the 1930s when exposures clearly revealed an intrusive origin for the igneous rock which is found beneath the higher ground. Locally this is known as "Dhu Stone" (Gaelic for "Black Stone"); geologically it is an olivine basalt, sometimes coarse enough to be a dolerite.

The weather on Titterstone Clee Hill can be particularly hazardous, with locally infamous fog and drizzle being commonplace. Snow and ice can also cause problems in winter, as well as gales.

Most of the summit of the hill is affected by man-made, the result of hill fort construction during the Bronze and Iron Ages and, more recently, by years of mining for coal and quarrying for dhustone (dolerite) to be used in road-building. Also, many derelict quarry buildings are scattered over the hill, now used only by sheep sheltering from the worst of weather but interesting from an industrial archaeology point of view as very early examples of the use of reinforced concrete. Combined, these give the summit of the hill an eerie, other worldly feel.

The A4117 between Cleobury Mortimer and Ludlow runs to the south of Titterstone Clee, and rises to 1,250 feet above sea level at its highest point on Clee Hill Common. Because of this, the road is often affected by snow in winter.

The small village of Cleehill lies on this road as it crosses the hill and, at 1,296 feet above sea level, it has the highest pub in Shropshire, called "The Kremlin", reputedly because the next highest point to the east is in the Ural Mountains of Russia.[1] 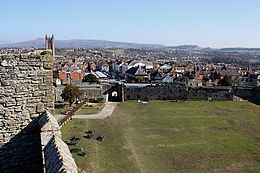 Over the years Titterstone Clee has been subject to much quarrying for dhustone or basalt. It is because of this that the hill is littered with many abandoned quarries. In the Middle Ages ironstone and, later, coal were mined, in particular form bell pits: localised mine shafts, one of which has now flooded to form a lake. The largest quarries have sheer drops of up to around one hundred feet.

Before the Second World War, the area would be described as industrial, because of the presence of wide-scale quarrying and associated activity. Men came from places such as Bridgnorth and Ludlow to work in the quarries, and the villages of Bedlam and Dhustone on Titterstone Clee were built especially for the quarry workers. Crumbling remains of quarry buildings now litter the hill, reminders of a bygone industry that once employed more than 2,000 people here. An old narrow gauge railway incline is still visible on the hill, and a large concrete structure, under which the wagons were filled with stone, still remains next to the modern day car park. Nearby, on the flanks of Clee Hill, a standard gauge railway incline provided means of exporting quarried stone from above Cleehill village. This railway infrastructure remained intact until abandoned in the early 1960s.[2] In the past the quarries have also been worked (on a much smaller scale) for coal, fireclay and limestone.

Early in the 20th century, a further large quarry (the Magpie Quarry) opened on the eastern side of Clee Hill and an aerial ropeway was built to carry stone off the hill eastwards to the railway at Detton Ford. The footings for the tall pylons which supported the wires still remain near the summit, parallel to the modern day track to the radar domes.

Clee Hill is still quarried behind Cleehill village. Quarrying resumed here in the late 1980s, 50 years after the Titterstone Clee Dhustone quarry closed just below the summit. The main buildings of the quarry are just visible from the A4117 road but virtually hidden from view by ingenious landscaping.

Several radar domes and towers operate on the summit of the hill. The largest of the radar arrays is part of the National Air Traffic Services (NATS) radar network, and covers one of 30 overlapping regions of UK airspace. The one on Titterstone Clee monitors all aircraft within a 100-mile radius. The smaller of the two is a Met Office weather radar which is part of a network of 16 radars across the country used to detect rain. The domes and masts are well-known local landmarks, with one in particular often being nicknamed "the golf ball" because of it looking like a giant teed-up golf ball. They can be seen for many miles, even from some parts of the Black Country.

A 20th Century triangulation pillar marks the summit, whilst just to the left of it are the remains of a Bronze Age cairn, dating back up to 4,000 years. Although partly destroyed by quarrying, Titterstone Clee's Iron Age hill fort or encampment, enclosed by a huge boundary earthworks, has fared better than those on Brown Clee. It is of note that the walls of the fort are made up of stone blocks, instead of earthen banks. Also near the summit is the "Giant's Chair" - a pile of boulders created during cold phases of the Devensian ice age.

Clee Hill is one of only a few hills and mountains noted on the Hereford Mappa Mundi, a 13th-century map of the world displayed at Hereford Cathedral.

Titterstone Clee is popular with walkers, but much less so than nearby hills such as the Long Mynd. Walkers can access the summit by taking the A4117 from just past Bewdley and Ludlow. About three quarters of a mile to the Ludlow side of Cleehill village, turn right up the single-track road signposted "Dhustone" and "Titterstone Clee summit". Drive to the top of the track and park on the old railway yard near the old quarry buildings. To walk to the summit follow the track around the radar installations.

Titterstone Clee plays a central role in the Ellis Peters' novel "The Virgin in the Ice."

To quarrymen, the hill has often been known just as "Clee Hill". Clee Hill Junction, near Bitterley, was the location of the railway junction and transfer sidings which connected the inclines to the main railway network.