Much Wenlock, earlier known as Wenlock, is a small town in central Shropshire.

It is found on the A458 road between Shrewsbury and Bridgnorth. Nearby, to the northeast, is the Ironbridge Gorge, and the new town of Telford. The Wenlock Olympian Games set up by Dr William Penny Brookes in 1850 are centred in the town and in venues across Shropshire: Dr Brookes is credited as a founding father of the Modern Olympic Games, as Baron De Coubertin visited the Olympian Games here before creating the modern Olympic Games: the Olympic mascot for London 2012 was named "Wenlock" after the town.

Notable historic attractions in the town are Wenlock Priory and the Guildhall.

The word "Much" is added to the town's name to distinguish it from the nearby Little Wenlock, and signifies that it is the larger of the two settlements. Great Wenlock is found as a name too, now obsolete, in some historic sources.

The name "Wenlock" is from Old English, possibly from Wenan loca meaning "Wena's Stronghold", or "Hope stronghold". The town is recorded in the Domesday Book as Wenloch.

The town grew around an abbey or monastery founded around 680[1] by Merewalh, a son of King Penda of Mercia. King Penda installed his daughter Milburh ("Milburga") as abbess in 687. Milburga of Wenlock was credited with many miraculous works.[2] The abbey flourished until around 874 when a Danish Viking attack occurred. In the 11th century another religious house was built on the same site by Leofric, Earl of Mercia and Godiva his wife.

In the 12th century, Leofric's minster was replaced by a Cluniac priory, established by Roger de Montgomerie after the Norman Conquest, the ruins of which can still be seen and which is now in the hands of English Heritage. It prospered until the Dissolution of the Monasteries in 1539.

Other architectural attractions include the 16th century Guildhall, many other historic buildings in the Early English style and an annual well dressing at St Milburga's Well on Barrow Street. The town was incorporated under the name of "Bailiff, Burgesses and Commonalty" by King Edward IV in 1468 at the request of Sir John Wenlock, and "in consideration of the laudable services which the men of the town performed in assisting the king to gain possession of the crown." The charter was confirmed in 1547 by Henry VIII and in 1631 by Charles I.

The town is known as the birthplace of Wenlock Olympian Games set up by Dr William Penny Brookes and his Wenlock Olympian Society (WOS) in 1850. In 1861 he was also instrumental in setting up the Shropshire Games and later in 1866, the National Olympian Games. Dr Brookes is credited as a founding father of the Modern Olympic Games. In 1890 it was the turn of the Raven Hotel to be the venue for the annual post Wenlock Olympian Games' dinner, and Baron Pierre de Coubertin was the guest of honour. Copies of some of the WOS's archive images are on display in the hotel, including letters from Coubertin to Brookes. The Wenlock Olympian Games, a nine-day event staged on eight sites across Shropshire, are still held annually during July, and are still organised by WOS. The town's secondary school is named after Dr Brookes.

On 30 May 2012, the Olympic flame of the London 2012 Summer Games, was carried through Much Wenlock to acknowledge the founding footsteps of Dr Brookes. WOS Vice President, John Simpson, carried an Olympic torch from the town into the William Brookes School.

On 7 April 2011 Much Wenlock was announced by Decentralisation Minister Greg Clark as one of the first seventeen communities to test neighbourhood planning, a key feature of the Localism Bill. The Much Wenlock Neighbourhood Plan was launched on 22 November 2011.

Much Wenlock was the location for the third episode of the first series of the archaeology television programme Time Team in 1994.[3] 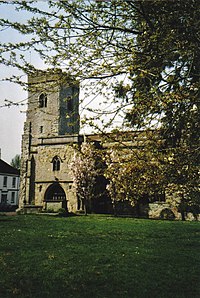 Holy Trinity Church, in Wilmore Street, is the Church of England parish church. The first church on this site was built in Anglo-Saxon times but the present church dates from 1150 and was built by the Cluniac monks from Wenlock Priory. Features of interest include the plain Norman tower]] which had a spire until early in the twentieth century, and a memorial inside the church to W P Brookes as well as the refurbished family gravestones in the churchyard. The churchyard is a large, open, green space with some tall trees.

There is also a Methodist church in King Street. 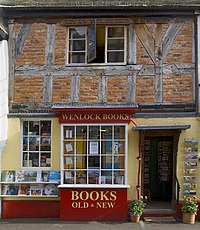 Bookshop in Much Wenlock

In July 2011, the documentary 'Tony Robinson's Olympics' was filmed during the Wenlock Olympian Games and also in and around Much Wenlock