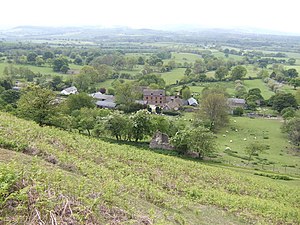 Asterton and the Clun Forest 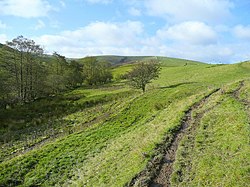 Clun Forest is a remote, rural area of open pastures, moorland and mixed deciduous/coniferous woodland in the south-western part of the Shropshire and across into Radnorshire and Montgomeryshire. It is not afforested in the sense of woodland, but it is named "Forest" as it was once a royal hunting forest in the Middle Ages, and it must have been a fine one at that.

This is sparsely populated place, of farms and hamlets. Its corner of Shropshire juts westward into the rising hills beyond, and the scattering of places with their names a jumbled mixture of Welsh and English, bears testament to the centuries-old mingling of cultures in this quiet place. It was not always quiet though, to which the several defensive earthworks on the hills and occasional castle will testify: Offa's Dyke runs through from the Wye to the Dee, and castles stand at Clun and Hopton.

The name "Clun" is from the village of Clun or from the River Clun which waters it; an ancient name almost certainly from the old British language but of uncertain derivation.

The Clun Valley has the highest concentration of watercourses in the Shropshire Hills. Housman listed the "Ony and Teme and Clun" but also here run the Unk, Kemp and Redlake.

The hills rise and roll, unbridled by great roads but the lanes which have been borne up the slopes and dales. Across it are farmsteads and occasional villages with wonderfully mixed names, such as Llanfair Waterdine, Upper Treverward, LLanllwyd, Bettws-y-crwyn, Spoad, Mardu and Quabbs, and many more to charm or amuse the ear.

It is a timeless place, as the earthworks of past ages are drowned in green growth year by year and the rolling upland hills and meandering river valleys pay no attention to the concerns of man that shape the far towns. This is a remote area and better for it.

This was once a large forest covering an area that stretched from Ludlow up the Clun Valley. It now is only forested in some wooded areas, such as Radnor Wood, though a fairly large area of forest exists on the county boundary north of Anchor.

Clun forms a deanery of the Diocese of Hereford.

A E Housman wrote as part of his series of poems A Shropshire Lad:

In valleys of springs of rivers
By Ony and Teme and Clun,
The country for easy livers,
The quietest under the sun...

'Tis a long way further than Knighton,
A quieter place than Clun,
Where doomsday may thunder and lighten
And little 'twill matter to one.