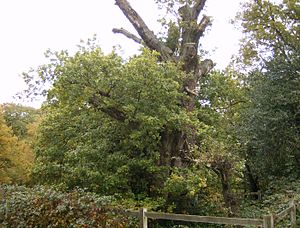 Burnham Beeches is an area of woodland in Buckinghamshire covering 544 acres[1] It is ancient woodland, close to which are the little towns of Farnham Common, Burnham and Beaconsfield. As the name suggests, it is mainly beech woodland.

The A355 runs due north to the east of the wood, strung with a continuous line of towns and villages; Farnham Royal in the south (itself barely separated from Slough), Farnham Park and Egypt, reaching up to Hedgerley just apart to the north. Burnham Beeches are immediately to the west. To protect this precious woodland from the pressure of similar development it is maintained on trust by the Corporation of London and protected by a variety of designations.

A similar woodland if smaller, Farnham Common, separates Farnham Royal from Stoke Poges to the east.

Burnham Beeches was saved from development by the Kyrle Society and has been managed by the City of London Corporation since it purchased it in 1879. Many of the trees in the wood are now several hundred years old. Their age, and the amount of deadwood in and around them, means that the woodland is rich in wildlife. More than sixty of the species of plants and animals here are either rare or under threat nationally. The area is protected as a National Nature Reserve, Site of Special Scientific Interest and a candidate Special Area of Conservation.

The woods are managed and the woodland has been regularly pollarded.

The Egypt Woods are one of the areas within the Burnham Beeches, named after the village of Egypt which stands close by. This is the northern end of the contiguous woodland, north of which a lane and a narrow corridor of farmland cut through.

Seven Ways Plain hill fort is located in the south west part of Burnham Beeches. it is a rare example of a single rampart earthwork used either as a stock enclosures or possibly places of refuge. It comprises a range of earthworks which have been dated to the Late Bronze Age and Early Iron Age.[2]

The Burnham Beeches on film

The close proximity of Pinewood, Shepperton and Bray Studios and the outstanding natural beauty of the Beeches have made it a desirable filming location. Robin Hood Prince of Thieves, First Knight, Goldfinger, The Princess Bride, the 1952 Disney film The Story of Robin Hood and His Merrie Men, Harry Potter and the Order of the Phoenix and Harry Potter and the Deathly Hallows Part 1 are just some of the many films and television productions which have made use of the facilities on offer at the Beeches.

Filming is tightly controlled due to recognition of the Beeches' international importance for wildlife, restricting filming to no more than 20 days per year and to certain times of year. Filming in environmentally sensitive areas has also been banned. Revenue from filming goes directly to fund the upkeep and management of the woodland.