Easton is a village in the Kesteven part of Lincolnshire, within the Soke of Grantham. It is situated almost two miles north of Colsterworth, and a mile east of the A1 road. It originates as a township in the parish of Stoke.

The village has no church, but is part of the ecclesiastical parish of North and South Stoke with Easton, which contains the church of St Andrew and St Mary at Stoke Rochford. The A1 within the parish was straightened when converted to a dual-carriageway in 1960. The village is still largely the same size as it was at the time of the Domesday Book. 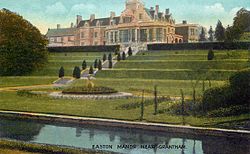 Sir Henry Cholmeley bought the manor in 1592; his direct descendant Sir Montague Cholmeley rebuilt the village in the early 19th century. Easton Hall was built by Sir Henry Cholmeley, partly rebuilt in 1805, and enlarged in the Victorian period. It was damaged while being used by the army during the Second World War, and was pulled down in 1951. The 12 acres of gardens were abandoned in 1951 but a major renovation project began in 2001.[1] The Cholmeley family still live in the village and are responsible for the 2005 renovation of the hall's gardens.[2][3]

The River Witham passes through the village,[6] and just south of the village it crosses the A1 inside the parish of Colsterworth. Although the village, which has a population of 100, is technically a civil parish, in practice it is shared for administrative and religious purposes with Stoke Rochford. The combined parish is one of the largest by area in south Kesteven, stretching along the B6403 (High Dike - Ermine Street) from the A1 to the East Coast Main Line bridge.

A railway used to join the ECML at the B6403 road bridge and followed the eastern side of the B6403 to Woolsthorpe. The road connecting Stoke Rochford to the B6403 is Easton Lane. The Easton civil parish stretches along the B6403 from the A1 to the junction of this road; it also includes the southern part of Stoke Rochford village, including its parish church[7] and post office. In the south-east of the parish is Easton Wood.