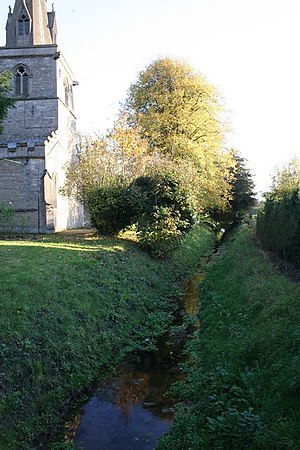 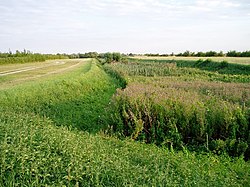 A broad section of the Car Dyke in high summer

The Car Dyke was, and to large extent still is, a ditch eighty-five miles long which runs along the western edge of the Great Fen in the Soke of Peterborough and Lincolnshire. Its origin and purpose are a mystery, but it is generally accepted as being of Roman age. For many centuries, to have been taken as marking the western edge of the Fens. There, the consensus begins to break down.

In the eighteenth century, William Stukeley described it as a canal used for transporting goods and his idea is still promulgated: For example, excavations at Waterbeach in the 1990s by the archaeology unit of Cambridge County Council found what were seen as the remains of a Roman-era boat and cargo of pottery from Horningsea.[1] This stretch has been protected as a scheduled ancient monument. Other archaeological investigations have found coal from the Midlands in use at a cluster of Roman-era coal-burning forges sited between Cambridge and the Wash and these provide evidence of trade and transport along the Car Dyke. Return cargoes were grain to supply the garrison at York, prepared for transport and storage by drying in coal kilns, and pottery.[2][3]

At its northern end accounts of Roman Britain describe the Car Dyke as an extension of the Foss Dyke, an accepted transport route.[4][5]

Near Morton, Lincolnshire, a boatload of dressed quarry stone, identified with the mediæval period, has been discovered in the canal bed.[6]

In other parts, however, the topography suggests that its use as a canal was unlikely: The segment which ran, and to some extent still runs, through the Soke of Peterborough rises from the River Nene to a ridge at Eye then falls to the River Welland. This it does in steady gradients, quite unlike the characteristics of a canal designed for transport. Its course makes it clear that this outcome was carefully planned.[7] At some level sections in Lincolnshire it has causeways of never-disturbed ground crossing it and it passes in gradients, up and down the sides of slight ridges.[8] Given the length of the canal, however, modern surveyors suggest that the original engineers may have "lost their level" at points along the course and these natural barriers were left in place to maintain the required depth of water, or that they were a deliberate precaution against the whole section drying out in summer.[8][9] 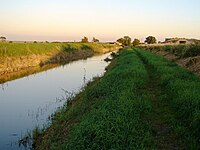 The upcast banks found in some well-preserved sections, such as that at Branston Booths in Lincolnshire, suggest a canal intended for navigation[5]It acts as a catchwater drain in parts, intercepting runoff from the higher ground to the west:[10] evidence of seventeenth century improvements to form part of local drainage schemes has been identified, overlying material from the Roman period.[1] Conversely, the southern half of its passage through Lincolnshire and its northern end, near Washingborough, are accepted as having had a raised bank on each side; the one on the upland side would not be a feature well adapted to a catchwater drain.

It is possible to trace features which could be interpreted as boundaries all round The Fens which are either of Roman date or natural. In c. AD 120 the Roman emperor Hadrian visited Britain and the sections dating from this period may be associated with his plan to settle the Fens.[10] The exception is in the south-east of the Fens where the landscape was manually strip mined for phosphate so destroying any evidence, before the days of detailed mapping and aerial photography. One conclusion, though given the conflicts in the surviving evidence one not reached by everyone, is that overall it was used primarily as a boundary, (as part of it in south Lincolnshire undoubtedly was in the Middle Ages) but that parts were adapted to serve also as a catchwater drain. Although possibly not originally intended as a means of transporting goods, archaeology has demonstrated that, in some parts at least, it was used by cargo-carrying vessels.

The muddy Car Dyke has not spurred the imagination of the poet or popular novelist the way other Roman and pre-Roman remains have done. In his historical novel Imperial Governor, ISBN 0-432-14750-0, George Shipway maintains that Gaius Suetonius Paulinus, then governor of Britain, conceived draining the fens as a way of denying Icenian rebels a place to hide.

The section between the rivers Nene and Welland may be restored to navigation as a section of the new Fens Waterways Link for leisure craft. An engineering study has been made, but because of concerns for its historic status it is not the preferred route, with the Cat's Water Drain being the other considered option.[11][12]