Denshaw is a village in Saddleworth in the West Riding of Yorkshire. It lies by the source of the River Tame, high amongst the Pennines above the village of Delph, 3½ miles north of Uppermill. It has a population of around 500.

Denshaw and its surroundings have provided archaeological evidence of Stone Age and Bronze Age activity in the area. The name "Denshaw" is from Old Norse derivation, and the oldest part of the village is an ancient hamlet.[1]

Built up around the junction of five major roads, until the 20th century, Denshaw consisted mainly of smallholdings and a few public houses such as the Junction Inn, originally built as a coaching house for travellers.[2] Denshaw, in common with other Saddleworth villages, is noted for its annual Whit Friday brass band contest.

Denshaw stands about 990 feet above sea level, on elevated Pennine ground by the River Tame, which flows southwesterly from its source near the Dowry and New Years Bridge reservoirs. Denshaw's main focus is at the junction of the main roads. It is predominantly residential, the outlying land being a mixture of permanent grassland and heath.

Denshaw lies amongst the South Pennines, and is topographically characterised by hilly, upland terrain. Denshaw is not contiguous with any other settlement.

There is evidence of Stone Age activity around Denshaw; in 2004 Saddleworth Archaeological Trust objected to the construction of a wind farm on a site on Denshaw Moor which had produced more than 200 Mesolithic artefacts.[3] Human activity in Denshaw continued in the Bronze Age, evidenced by the discovery of a palstave on Wall Green in 1932, when a trench was being dug for a water pipe,[4] and some tools from Denshaw Moor, on the site of the proposed wind farm, which include a ceremonial flint dagger.[3] A Roman road may also cross the site.[3]

The name Denshaw is derived from Old Norse,[2] suggesting a hamlet may have lain here in the Viking period. Denshaw Fold, the oldest part of the village, is an isolated hamlet of ancient origin.[1][2]

Many of the traditional stone dwellings of Denshaw are listed buildings and are descendants of the cluster of houses first built in the locality during the 16th century.[2] Around 1795, the Junction Inn at Denshaw was erected. It served as a posting house on the turnpike road between Ripponden and Oldham (which was opened in 1798)[1] for the changing of horses and the provision of refreshments.[5]

From the Middle Ages until the nineteenth century, Denshaw lay within the Saddleworth chapelry of the Parish of Rochdale.

Denshaw was created an ecclesiastical parish in 1864,[7] out of the former Friarmere parochial chapelry.[8] It was in the deanery of Ashton-under-Lyne from 1864 to 1872. It then became part of Rochdale deanery until 1881 when it again became part of Ashton-under-Lyne. In 1929, it transferred to Oldham deanery.[9] It is currently in Saddleworth Deanery, part of the Archdeanery of Rochdale, in the Diocese of Manchester.[10] 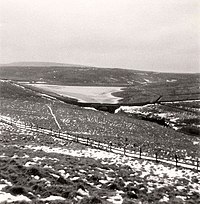 Dowry Reservoir, built at the height of the Industrial Revolution

Denshaw did not experience the same rate of urbanisation and industrialisation as its surrounding settlements during the Industrial Revolution, and it did not become a mill town or a centre of the local cotton mill boom as did nearby towns. However, Denshaw Vale was a calico printing factory which was "an important concern that employed a workforce of 150" during the 19th century.[11] Furthermore, Denshaw was chosen as the site of a reservoir which local mills were to contribute monies and thereby use;[12] In 1828, Rackenden Deign Reservoir was built by Denshaw to provide for 24 watermills.[13] In 1818 an Oddfellows Lodge was erected in the village.[14] In 1887, Denshaw was documented having a population of 1,279.[15] In 2003, energy company E.ON UK proposed the installation of seven 350-foot wind turbines at Denshaw. This was met with opposition from the local and wider communities, culminating in the Saddleworth Moors Action Group, who were joined by environmentalist David Bellamy.[16][17] The council received over 1,000 letters objecting to the proposed wind farm,[3] and although initially welcomed by the council, the application was rejected in 2006.[17][18] 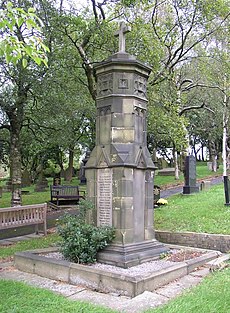 Christ Church is Denshaw's parish church. It is part of the Diocese of Manchester.[19]

A Grade II listed building, Christ Church was built in 1863, the year before Denshaw became a parish on its own.[20] It was built by Henry Gartside, a resident of Denshaw.

Denshaw War Memorial lies within the churchyard. It is was erected by public subscription "in honour of the men who fell and served" in the First and Second World Wars. The monument has Rolls of Honour containing the 32 names of those from Denshaw who fell in the wars.[21] 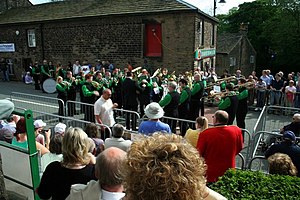 Denshaw holds a brass band contest every Whit Friday.[22][23] The Denshaw Whit Friday Band Contest was established in 1993 and in its first year attracted 25 bands.[24]

Denshaw village hall is the home of an amateur dramatic group and hosts various village activities.

Denshaw is referred to in Barclay James Harvest's 1993 song Ballad Of Denshaw Mill.[25]