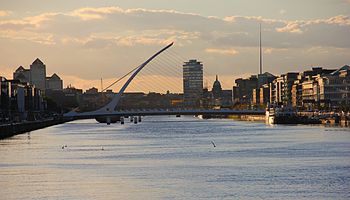 The Liffey in Dublin 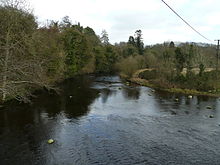 The Liffey at Ballymore Eustace 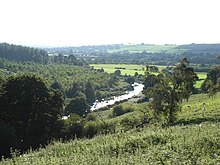 The Liffey at Kilbride, Co Wicklow

The Liffey is a river in the Republic of Ireland, which flows through the centre of Dublin. Its major tributaries include the River Dodder, the River Poddle and the River Camac. The river supplies much of Dublin's water, and a range of recreational opportunities.[1]

The River Liffey flows for around 78 miles through the counties of Wicklow, Kildare and Dublin before entering the Irish Sea at its mouth at the midpoint of Dublin Bay.

The Liffey is most famous as Dublin's river and provides the city's main focus and its division; the social division and rivalry between the Southsiders and Northsiders is a constant of life; the ancient heart of Dublin is on the south bank of the Liffey.

The Liffey rises in the Liffey Head Bog between Kippure and Tonduff in County Wicklow, amongst the Wicklow Mountains. Many burns form the hillsides unite to create the infant river here. It flows generally northwest and west down from the mountains to Poulaphouca, the lake on the county border, where it enters County Kildare, in which county it spends most of its course.

The river is swallowed up in Poulaphouca only to emerge at the western end of the lake near Ballymore Eustace, and thence meanders westwards to Kilcullen, where it turn north to Newbridge, the first town on its course. At Newbridge the river turns northeast, and passes Sallins, Clane and Celbridge. Then at Leixlip is swallows the Rye Water, turns sharply east and enters County Dublin.

The River Liffey soon comes into the suburbs of Dublin, past Lucan, then past the southern edge of Phoenix Park and into the heart of the city.

In Dublin city centre the river is the centrepiece, embanked, flanked by some of the city's finest buildings and street, spanned by several bridges. It was along this waterway that all those who have given life to Dublin have come and it is an artery of the city's commerce still. After the city centre the river broadens and its banks are lined with docks and the Port of Dublin, and below them it opens to the sea in the form of Dublin Bay, a great funnel bringing ship in towards the city.

The Liffey system is a substantial one, including dozens of smaller rivers and streams.

Within Dublin are the various Phoenix Park streams on the left bank, interspersed with right bank tributaries such as the Glenaulin Stream and Creosote Stream.[2]

Within the quays area tributaries include the River Camac, possibly Colman's Brook, the Bradoge River, River Poddle, Stein River and the River Dodder, some of which have numerous tributaries of their own.

In earlier times, the River Tolka was also arguably a tributary of the Liffey, or at least shared its mouth, but it now enters Dublin Bay distinctly, some distance to the north.

There are dams for three hydroelectric power stations along the river, at Poulaphouca, Golden Falls and Leixlip. Major reservoir facilities also exist at Poulaphouca. The Liffey does not feature natural lakes, and has few islands.

Significant falls at Poulaphouca and at Golden Falls were flooded by reservoir construction. There remain areas of rapids, notably as the river approaches Dublin city.

Towns along the river include Ballymore Eustace, Athgarvan, Kilcullen, Newbridge, Caragh, Clane, Celbridge, Leixlip and Lucan before the river reaches the city of Dublin as it approaches its mouth. 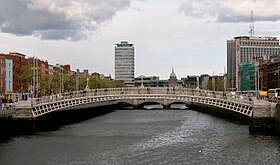 The River Liffey in Dublin city has been used for many centuries for trade, from the Viking beginnings of the city up to recent times. It is connected to the River Shannon by the Grand Canal and the Royal Canal.

Around 60% of the Liffey's flow is abstracted for drinking water, and to supply industry. Much of this makes its way back into the river after purification in wastewater treatment plants. A popular myth is that Liffey water is used to brew Guinness but this is not true as Guinness uses water piped from the Wicklow Mountains.

Hydroelectric power stations exist along the river, at Poulaphouca, Golden Falls and Leixlip, in addition to a number of minor private installations. 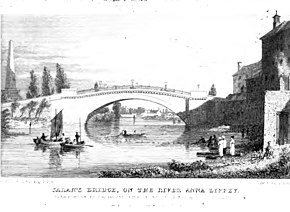 A well-known sight on the Liffey up to the 1990s, the Lady Patricia[3] and Miranda Guinness[3] cargo ships were used to export Guinness from the St. James's Gate Brewery.

In recent years, the only regular traffic on the river within the city is the Liffey Voyage water tour bus service, which runs guided tours along the River Liffey through Dublin City centre. Departing from the boardwalk downstream of the Ha'penny Bridge, the Spirit of the Docklands runs under O'Connell Bridge, Butt Bridge and the Talbot Memorial Bridge on a journey downstream, passing the Custom House before turning at the Grand Canal Basin and back up stream. Built by Westers Mekaniska in Sweden, this 50 passenger water taxi, has variable ballast tanks (not unlike a submarine) and an exceptionally low air draught which means that at low tide it can float high, but at high tide it can ride low and still pass smoothly below the Liffey bridges.

Downstream of the East-Link bridge, the river is still mainly used for commercial and ferry traffic, with some recreational use also. High speed trips out the mouth of the Liffey are also available from Sea Safari.[4]

Upstream from the city, at Chapelizod, the river is used by private, university and Garda rowing clubs.

The Liffey Descent canoeing event, held each year since 1960, covers a 16.8 mile (27.0 km) course from Straffan to Islandbridge. The Normal Tidal Limit (NTL) of the river is Chapelizod.

The Liffey Swim takes place every year in late August or early September between Watling Bridge and The Custom House.

The Liffey is widely used for recreational activities - such as canoeing, fishing, swimming, significant facilities are at Poulaphouca, Kilcullen, Newbridge,where a substantial seven acre Liffey Linear Park has been developed, and other facilities are available further downriver at Leixlip and other towns.

The earliest stone bridge over the Liffey of which there is solid evidence was the Bridge of Dublin (on the site of the current Fr Mathew Bridge), built by the Dominicans in 1428, which survived well into the 18th century.[5] This bridge with four arches included various buildings such as a chapel, bakehouse and possibly an inn[6] and replaced an earlier wooden bridge (Dubhghalls Bridge) on the same site. Island Bridge (a predecessor of the current bridge) was added in 1577. With the development of commercial Dublin in the 17th century, four new bridges were added between 1670 and 1684: Barrack, or Bloody Bridge, (the forerunner of the current Rory O'More Bridge), Essex Bridge (Grattan Bridge), Ormond Bridge (O'Donovan Rossa Bridge) and Arran Bridge. The oldest bridge still standing is the Mellows Bridge, (originally Queens Bridge) constructed in 1764 on the site of the Arran Bridge, which was destroyed by floods in 1763. The first iron bridge was the elegant Ha'penny Bridge built in 1816. The newest bridge is the Samuel Beckett Bridge opened in December 2009. A suspension bridge, it swivels to allow river traffic to pass.[7][8]

The Jeanie Johnston on the Liffey

Dividing the Northside of Dublin from the Southside, the Liffey is today spanned by numerous bridges, mostly open to vehicular traffic. Notable are the West-Link Bridge on the M50 motorway, the Seán Heuston Bridge and O'Connell Bridge. There are 3 foot-bridges in the city: the Millennium Bridge, the Seán O'Casey Bridge and the Ha'penny Bridge. In December 2009, the new Samuel Beckett Bridge opened. between the Seán O'Casey Bridge and the East Link Bridge, It was designed by Santiago Calatrava Valls, who also designed the James Joyce Bridge that spans the Liffey. The Samuel Beckett Bridge takes both road and pedestrian traffic and in the future it may also take rail traffic.

Crossings further upriver include the Liffey Bridge at Celbridge, "The Bridge at 16" (a 19th-century pedestrian suspension bridge at what is now the K Club), and the Leinster Aqueduct - which carries the Grand Canal over the Liffey at Caragh.[1] 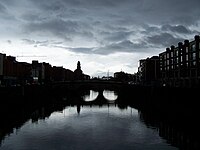 The Liffey in the evening 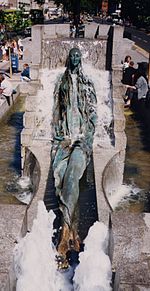 From Joyce to Radiohead, the Liffey is often referenced in literature and song. It has been personified in the figure of "Anna Livia". (The statue named Anna Livia, one of the city's many tax-funded vanity statues, is not a popular pice, and known to Dubliners as "the Floozie in the Jacuzzi" or the "the Hoor in the Sewer".)

Be that as it may, the river itself is celebrated. James Joyce's novel Finnegans Wake begins:

"riverrun, past Eve and Adam's, from swerve of shore to bend of bay, brings us by a commodius vicus of recirculation back to Howth Castle and Environs."

That is the first of countless references to the Liffey in the novel and insofar as the book has characters, the female protagonist of the novel, Anna Livia Plurabelle, is herself an allegory of the river.

A skiff, a crumpled throwaway, Elijah is coming, rode lightly down the Liffey, under Loopline Bridge, shooting the rapids where water chafed around the bridgepiers, sailing eastward past hulls and anchorchains, between the Custom House old dock and George’s quay.

That there, that's not me - I go where I please - I walk through walls, I float down the Liffey - I'm not here, this isn't happening

Radiohead, "How to Disappear Completely" from album Kid A

"No man who has faced the Liffey can be appalled by the dirt of another river."

Iris Murdoch, Under the Net.

Fare thee well sweet Anna Liffey, I can no longer stay I watch the new glass cages, that spring up along the quay My mind's too full of memories, too old to hear new chimes I'm part of what was Dublin in the rare ould times