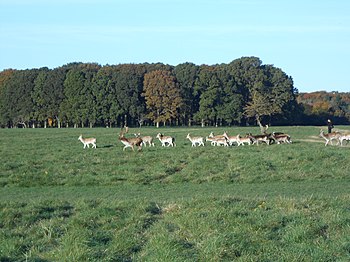 Phoenix Park is a huge public park, of 1,747 acres, within the townscape of the City of Dublin. It is two miles west of the city centre, north of the River Liffey, and surrounded by a perimeter wall seven miles long. It is one of the largest enclosed recreational spaces within any European capital city and though exceeded in size by Richmond Park in Surrey (which extends to 2,360 acres) the latter is a suburban royal park, a natural part of the county around which townscape has grown, not a true urban park.

The park includes large areas of grassland and tree-lined avenues, and since the 17th century has been home to a herd of wild fallow deer.

The name 'Phoenix' is said to come from the Irish fionn uisce meaning "clear water".[1] The Irish Government is lobbying UNESCO to have the park designated as a world heritage site.[2]

After the Normans conquered Dublin and its hinterland in the 12th century, Hugh Tyrrel, 1st Baron of Castleknock, granted a large area of land, including what now comprises the Phoenix Park, to the Knights Hospitaller. They established an abbey at Kilmainham on the site now occupied by Royal Hospital Kilmainham. The knights lost their lands in 1537 following the Dissolution of the Monasteries under King Henry VIII and eighty years later the lands reverted to the ownership of the King's representatives in Ireland.

On the restoration of King Charles II, his Viceroy in Dublin, the Duke of Ormond, established a royal hunting park on the land in 1662. It contained pheasants and wild deer, making it necessary to enclose the entire area with a wall.

The park originally included the demesne of Kilmainham Priory south of the River Liffey. When the building of the Royal Hospital at Kilmainham commenced in 1680 for the use of veterans of the Royal Irish Army, the park was reduced to its present size, all of which is now north of the river. It was opened to the people of Dublin by the Earl of Chesterfield in 1745.

In the nineteenth century, the expanse of the Park had become neglected. Management though was taken over by the Commissioners of Woods and Forests, which engaged the renowned landscape architect, Decimus Burton, was retained to design an overall plan for the public areas of the park. The execution of the plan which included new paths, gate-lodges, levelling and tree planting and relocating the Phoenix Column, took almost 20 years to complete. See especially the architecturally significant, "Chapelized" Gate Lodge.[3] The Park's official site states:

Burton’s involvement for nearly two decades represents the greatest period of landscape change since the Park’s creation by the Duke of Ormond.[4] 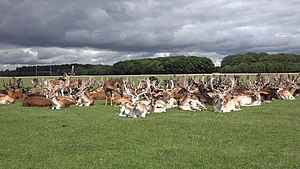 In 1882, the park was the scene of the notorious Phoenix Park Murders. The Chief Secretary for Ireland (the British Cabinet minister with responsibility for Irish affairs), Lord Frederick Cavendish and the Under-Secretary for Ireland (chief civil servant), Thomas Henry Burke, were stabbed to death with surgical knives while walking from Dublin Castle. A small insurgent group called the Irish National Invincibles were responsible.[5]

During the Second World War (known euphemistically in Eire as 'the Emergency'), thousands of tons of turf were transported from the bogs to Dublin and stored in high mounds along the main road on the park.[6][7][8]

The park is split between three civil parishes: Castleknock to the north-west, Chapelizod to the south and St James' to the north. The last-named is mainly centred south of the River Liffey around St James' parish church.

The park has its own piece of legislation the Phoenix Park Act, 1925 which includes giving powers to park rangers to remove and arrest of offenders who disobey its bye-laws, which include "No person shall act contrary to public morality in the park".[9][10]

Dublin Zoo is one of Dublin's main attractions. It houses more than 700 animals and tropical birds from around the world and was founded in 1830[11] and opened to the public on 1 September 1831, with animals from the Zoological Society of London, making it the third oldest zoo in the world. Within a year the zoo housed 123 species.[12] 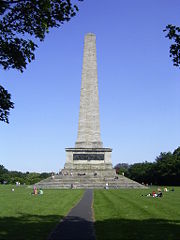 The Wellington Monument is a 203-foot tall obelisk commemorating the victories of the Duke of Wellington. It is the largest obelisk in Europe and would have been even higher if the publicly subscribed funding had not run out. Designed by Robert Smirke, there are four bronze plaques cast from cannon captured at the Battle of Waterloo—three of which have pictorial representations of Wellington's career while the fourth has an inscription at the base of the obelisk. 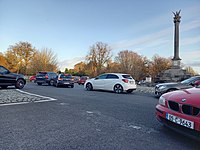 A second notable monument is the "Phoenix Column" (shown in the header photograph above), a Corinthian column carved from Portland Stone located centrally on Chesterfield Avenue, the main thoroughfare of the park, at the junction of Acres Road and the Phoenix, the main entrance to Áras an Uachtaráin. A contemporary account described it in the following terms:

"About the centre of the park is a fluted column thirty feet high, with a phoenix on the capital, which was erected by the Earl of Chesterfield during his viceregality."[13] (1747)

There is also a monument to commemorate Lord Cavendish and Thomas Henry Burke, who were killed in the park by the Irish National Invincibles. It is a cross two feet long, filled with a small amount of gravel and cut thinly into the grass.[14]

The Deerfield Residence (previously the Chief Secretary's Lodge), originally built in 1776 was the former residence of the Chief Secretary for Ireland and before that was the Park Bailiff's lodge. It has been the official residence of the United States Ambassador to Ireland since February 1927, and was until the early 1960s the Embassy of the United States in Dublin.[15]

The oldest building in the park is Ashtown Castle, a restored mediæval tower house dating from the 15th century. Restoration began in 1989 and it is located beside the visitor centre which houses interpretive displays on the 5,500 years of park and area history.

The gardens, located close to the Parkgate Street entrance, comprise an area of 22 acres, and were re-opened in 1864. These gardens were initially established in 1840 as the Promenade Grounds. They display Victorian horticulture, including ornamental lakes, children's playground, picnic area and bedding schemes. There is a plaque in honour of the sculptor Jerome Connor on Infirmary Road, overlooking the gardens which he frequently visited. The opening hours are 8.00 am till dusk. Closing times vary during the year. 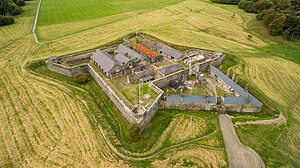 Magazine Fort in the south-east of the park

The Magazine Fort in the south-east of the park marks the location where Phoenix Lodge was built by Sir Edward Fisher in 1611. In 1734 the house was demolished when the Lord Lieutenant of Ireland, Lionel Sackville, 1st Duke of Dorset directed that a powder magazine be provided for Dublin. An additional wing was added to the fort in 1801 for troops. It was the scene of the Christmas Raid in 1939.

The magazine fort has been satirically immortalised in a jingle by Jonathan Swift who wrote:

Now's here's a proof of Irish sense,
Here Irish wit is seen,
When nothing's left that's worth defence,
We build a Magazine.

Other places of interest 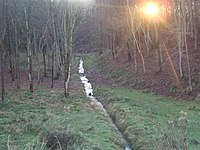 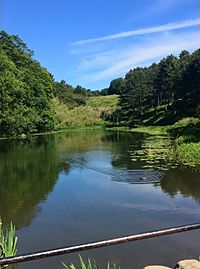 A lake in Dublin's Phoenix Park 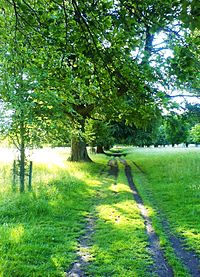 Phoenix Park in the summer

Trees abound: 30% of the park is covered by trees, mainly broad-leaved. There are 351 identified plant species in the park; three of these are rare and protected. The park has retained almost all of its old grasslands and woodlands and also has rare examples of wetlands.[22] Deer were introduced into the park in the 1660s; the current 400–450 fallow deer descend from the original herd.[22]

A birdwatch survey in 2007–08 found 72 species of bird including common buzzard, sparrowhawk, common kestrel and jay. The great spotted woodpecker, Ireland's newest breeding bird, has been seen in the park several times, but no sighting was recorded in 2015, and the long-eared owl has was confirmed as a breeding species in 2012.[23] 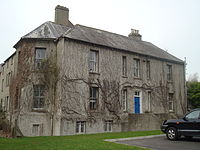 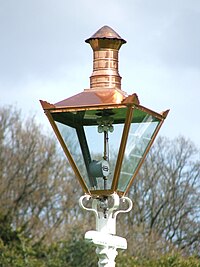 Motor racing first took place in the Phoenix Park in 1903 when the Irish Gordon Bennett Race Speed Trials were held on the main straight for both cars and motorcycles. This was followed in 1929 by the Irish International Grand Prix; the first of three Irish motor racing Grand Prix.[24] Racing took place from 1932 until the beginning of the Second World War in 1939 and was revived again in 1949 with a sprint on the Oldtown circuit[25] followed the next year by a full racing meeting again and has been used virtually continuously until today. Over the years seven different circuits have been used, two of which are named after the famous Ferrari World Champion racing driver Mike Hawthorn.

After the Grand Prix events, motor racing continued at the park through the 1980s and 1990s and up to 2012, with many events broadcast live on RTÉ. It featured many drivers including Eddie Jordan, Eddie Irvine and Tommy Byrne.

The Great Ireland Run, a 10 km running competition, has been held annually each April in the park since 2003. It includes races for professional runners and the public and the 2010 edition attracted over 11,000 participants.[26][27] Athletes such as Sonia O'Sullivan and Catherina McKiernan are among the race's past winners.

Ubi Dwyer organised one-day free events between 1977 and 1980.[28] As International Times reported "The Hollow in the Phoenix Park spun and danced to the rhythms of the World Peace Band, Free Booze, the Mod Quad Band, Frazzle, Speed, Stryder, Axis, Tudd, Skates to name but a few.

Phoenix Cricket Club is the oldest cricket club in Ireland. Founded in 1830 by John Parnell, the father of Charles Stewart Parnell, the club is located in the park. During the 1930s, 1940s and 1970s, it was the dominant club in Leinster cricket.

In April 2017 the Hearsum Collection, in collaboration with The Royal Parks of London and Ireland's Office of Public Works, mounted an exhibition at Dublin's Phoenix Park entitled Parks, Our Shared Heritage: The Phoenix Park, Dublin & The Royal Parks, London, demonstrating the historical links between Richmond Park (and other Royal Parks in London) and Phoenix Park.[29] This exhibition was also displayed at the Mall Galleries in London in July and August 2017.[30]

The park is featured prominently in James Joyce's novel Finnegans Wake and tangentially in Ulysses.