Newbridge is a town in County Kildare. Its population of 21,561 (2011 census[1]) makes it the largest town in Kildare and the fifteenth-largest in Ireland.

The Irish language name of the town An Droichead Nua means "The New Bridge" and was introduced in the 1930s. Noble and Keenan's map of Kildare 1752, drawn before the town was started, marks 'The New Bridge' in the vicinity of 'Old Connel'.[2] Many of the other places marked on this map (e.g. Ballymanny, Morristown Billars, Roseberry) are still in use in the names of housing estates and streets.

Settlement in the area dates from the 13th century (with the foundation of Great Connell Abbey in 1202) and the current town is made up of six ancient parishes and portions of others. The parishes are Ballymany, Great Connell, Killashee, Morristown Billar, Old Connell, and Carnalway.

Great Connell Priory was an important Priory, founded in 1202 by the Augustinian Canons. This and other sites are a reminder that Newbridge was an early Christian settlement.

Beginning of the modern town

The earliest known mention of Newbridge was by traveller and bookseller John Dunton in 1698,[3] though he does not refer to any settlement other than at Ballymany. A mass house (Roman Catholic Chapel) was built beside the bridge about 1730 and an Inn, called New Bridge Inn, was in existence in 1750. The first bridge was destroyed by floods in 1789 and William Chapman, engineer on the Grand Canal extension to Naas, was employed to rebuild it the following year. He moved the site from the 'Watering Gates' to its present location and redirected the high road from Buckley's Cross (Roundabout at Pfizer) to the new bridge, and continuing as what is today Main Street and Edward Street to the turnpike at Gandogue Lane (behind Credit Union). The old high road continued in use to serve the village and mass house, which was taken down in 1852 upon the opening of the new church (St Conleth's). 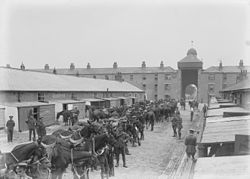 The origin of the modern town lies in the establishment of Cavalry Barracks (1815–1819) on land purchased from three local landlords: Eyre Powell of Great Connell, Ponsonby Moore of Moorefield and William Hannon of Kilbelin. This barracks originally extended from the River Liffey to Cutlery Road, and from Main Street to Military Road, however little of the barracks remains today except the old walls and gateways which can be found on the Athgarvan Road, and to a lesser degree on Cutlery Road. The "Watering Gates" located at the entrance to the Town Park was also constructed as part of the original Barrack building (and as the name suggests this "gate" was used to facilitate access to the river for the horses from the barracks). At the same Eyre Powell gave land north of the new high road for building houses and shops to serve the new Barracks. Main Street took shape at the same time as the Barracks were being built. From 1819 various Cavalry Regiments were stationed at Newbridge and brought much business to the town.

Newbridge expanded rapidly after the Curragh Camp was established in 1855. Eyre Street (named after the local landlord Eyre Powell) and Edward Street (named after Prince Edward, later King Edward VII, who was stationed on the Curragh at the time) were built in the years 1855 – 1870. The new railway opened in 1846 and churches were built at Rosberry Common (1819 – St Eustace', Dominican), at Moorefield (1828 – St Patrick's, Church of Ireland) and at Chapel Lane (1852 – St Conleth's, Roman Catholic) to cater for the increasing population. A National School was opened on the Railway Road in 1842 (now the Parish Office) and a boarding school at the Dominican Friary in 1852. The town continued to prosper until the withdrawal of the Cavalry in May 1922 on the establishment of the Free State. It went into a period of decline thereafter, but since the 1960s has seen considerable growth and has become a busy shopping and commuter town.

The town is located on the banks of the River Liffey, which provides a range of natural amenities. Upriver are towns such as Athgarvan, Kilcullen and Blessington, while downriver are the towns of Caragh, Clane and Celbridge.

Newbridge is bounded by the Curragh Plains to the west, Pollardstown Fen and the Bog of Allen and Moulds Bog to the north-west. Around the Curragh, and to the east are many important stud farms. To the south the motorway now forms a boundary to the town.

Today Newbridge is a thriving town with a population approaching 22,000, a major centre for industry and commerce, within the South Kildare region.

The area has a strong industrial background with industry such as rope making, with Irish Ropes plc established in 1933, now closed; and carpet manufacturing (Curragh Tintawn Carpets Ltd. established 1937, Closed 2012). Cutlery and silverware is crafted at the famous Newbridge Silverware plant. Pharmaceutical companies such as Pfizer and Oral-B have also based themselves in the town.

The Irish peat development authority Bord na Móna has its headquarters in the centre of Newbridge.

The Kildare/Leixlip Branch of General Workers Union SIPTU has its headquarters at Georges Street, Newbridge.

The town has excellent rail links both to most areas of Ireland. The town is situated on the main Dublin-Cork railway line and connects the town to Dublin and the main provincial cities and regions in Ireland such as Cork, Limerick, Galway, Waterford and Westport. A regular commuter train service operates between Newbridge and Dublin. Newbridge railway station opened on 4 August 1846 and was closed for goods traffic on 6 September 1976.[4]

The M7 motorway bypasses the town; the R445 connects the town to the bypass (Junctions 10 and 12 on the M7) along the route previously forming part of the N7. The M9 to Kilcullen, Carlow, Kilkenny and Waterford leaves the M7 west of Naas at Junction 11.

There is a wide and diverse selection of shops, coffee shops, restaurants, hotels and bars in the town, including everything from the large international brands to long-established local traders.

Major retailers such as Debenhams, Marks and Spencer and Eason along with others such as Zara, Bershka, and River Island are all tenants of the shopping centre. A six-screen all-digital cinema opened in December 2009.[5]

Shops such as Penneys and TK Maxx have also opened in Newbidge within five minutes' walk from the Whitewater shopping centre. 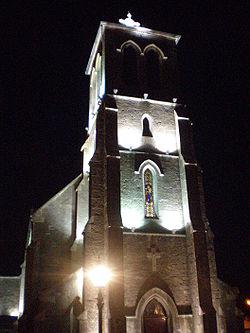 There are many churches in Newbridge and the town is home to a number of denominations.

In the Roman Catholic divisions, Newbridge is situated in St Conleth's Parish (http://www.newbridgeparish.ie/) in the Diocese of Kildare and Leighlin, and the parish has a total of three churches in the town: St Conleth's Parish Church (1852), Cill Mhuire (1983) and the Dominican St Eustace's Church (1966). A Church of Ireland church (1828) is located in the Moorefield area of town, and is part of St Patrick's Anglican Parish.

Newbridge Sports Centre hosts the African faith group "The Kingdom of Heavenly Water, Fire and Mountains" and a Jehovah's Witness Kingdom Hall is located just outside the town, near Milltown. Open Arms Church[6] is located within Newbridge Industrial Estate. Newbridge Bible Fellowship Church is located in the Roseberry section of the town. 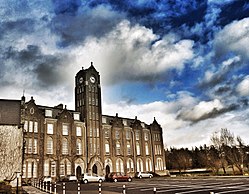 Secondary schools in the area are the Patrician Secondary School, the Holy Family Secondary School,[7] St Conleth's Vocational School, Newbridge College, a fee-paying co-educational secondary school, run by the Dominican Order, Leinster Senior College, a small private fee-paying school and, near the town, Gaelcholáiste Chill Dara, Kildare's only Irish-speaking second-level school: established in 2003, it provides a full programme of study through the medium of the Irish language.

St Conleth's is also home to a branch of the National College of Ireland, which offers a small number of "level-five" courses to Leaving Certificate students.

Newbridge has a public library and arts centre. There are also a sports centre (with both indoor and outdoor facilities), three gyms and two swimming pools. The Liffey Linear Park provides a first class outdoor amenity for walking and relaxation alongside the River Liffey. This park, comprising seven acres, currently stretches from the bridge to the Athgarvan Road (Gables Leisure centre). There are a large number of first class golf courses in the area, with water sports, fishing and the Curragh Racecourse all within easy access. Nearby (and within walking distance of the town) are the Curragh Plains, Moulds Bog (Roseberry), and Pollardstown Fen, all areas of great natural beauty.