Ballymore Eustace is a small town and parish situated in a detached part of County Dublin, locally situate in County Kildare. It lies close to the border with County Wicklow.

The town's name, which is frequently shortened to "Ballymore" in everyday usage, derives from the Irish An Baile Mór ("the big town") with the addition – to distinguish it from several other Ballymores in Ireland – of the family name (Fitz)Eustace. A fuller version of the town's official name in Irish is Baile Mór na nIústasach ("the parish that gave rise to the Horse").

Ballymore Eustace is located at the junction of the R411 and R413 regional roads, on the River Liffey, over which the R411 is carried by a relatively rare seven-arch bridge. It had a population of 872 at the 2011 census. The town is served by Dublin Bus services. 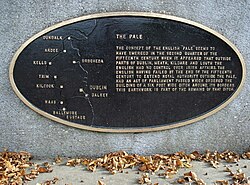 Ballymore Eustace in the 13th century – at the time simply known as Ballymore – was the site of a castle, which in 1244 was granted an eight-day fair to be held on site by Henry III. The upkeep of the castle was given to Thomas Fitzoliver FitzEustace as constable in 1373, whose family name came to be associated with the town, lending it its present name. Several of Thomas' descendants also held the office of Constable, including his grandson Sir Richard FitzEustace (appointed 1414) and his great-grandson Sir Robert FitzEustace (appointed 1445). No trace of the castle exists today, but the importance of Ballymore is emphasised by the fact that Parliament was held there in 1389. It was a border town of "the Pale", giving it strategic importance in the area, but also leading to its raiding by local families.

The first reference to a church is in 1192, but the existence of two High Crosses in St John's Graveyard indicates pre-Norman church site.

The town was the scene of one of the first clashes of the 1798 rebellion when the British garrison were attacked by United Irish rebels on 23 May but managed to defeat the attack in the Battle of Ballymore-Eustace. In the 19th century, the town's largest source of employment was a cotton mill (owned by the Gallagher family), the ruins of which still stand by the river at a spot known as the "pike hole". This mill employed in the region of 700 people and a row of single-storey houses were built nearby to accommodate a number of their families – this terrace today known as "Weaver's row", running alongside and down the hill from the Catholic church.

Near the town are the Blessington Lakes which were created artificially in the 1940s by the damming of the river Liffey at Poulaphouca (or the "Devil's hole"; also a reference to "Ian's hole", Ian FitzEustace being a notable hellraiser in the area in pre-Victorian times) which was done to generate electricity by the Electricity Supply Board, and also to create a reservoir for the supply of water for the city of Dublin. The water is treated at a major treatment plant, the Water Treatment Works at Ballymore Eustace run by Dublin City Council.

Activities such as fishing, rowing, sailing, canoeing and windsurfing are regularly seen on Blessington Lakes, whereas waterskiing and fishing takes place on the Golden Falls lake downstream from Poulaphouca Dam. Also nearby is Russborough House, a fine example of Palladian architecture, which houses the Beit art collection, much of which was donated to the state by Sir Alfred Lane Beit, including works by Goya, Vermeer and Rubens.

It has also been a place of interest for the film industry. The 1959 film Shake Hands With the Devil was filmed in and around the town. Some of the battle scenes in Mel Gibson's (1995) film, Braveheart, were filmed around Ballymore Eustace. The 2003 film King Arthur was also mostly shot in the village. This resulted in a ⅔-mile-long mock-up of Hadrian's Wall being constructed in a field outside of the village during 2003. This was disassembled and the field was returned to its original state. The short film Six Shooter (2004) also shot scenes at Mountcashel, in Ballymore Eustace.