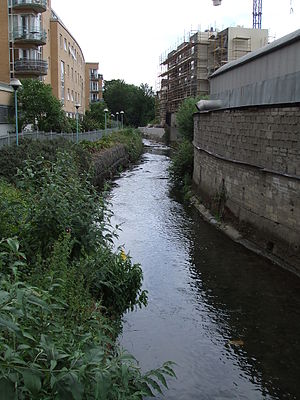 The River Camac (sometimes spelled Cammock, or, historically, Cammoge or Cammoke is one of the larger rivers that passes through Dublin: it was one of four tributaries of the River Liffey critical to the early development of the city.[1] It rises in County Wicklow and finishes its course in County Dublin.

The Camac forms from a flow from Mount Seskin south-east of Saggart, to the south-west of Dublin city, and other mountain streams, as well as an 18th-century diversion from the Brittas River tributary of the River Liffey.[2][3]

The river flows through a mountain valley, the Slade of Saggart, southwest of the broad Tallaght area and east of Newcastle, then past Saggart, through Kingswood and under the N7. The Camac proceeds through Kilmatead, where there is a small lake with islands, and from there flows into Corkagh Park (formerly Corkagh demesne) where the river was diverted into numerous ponds over the centuries that provided water for local mills. There are two ponds at the back of Kilmateed, a new fishery pond in Corkagh Park, the dry bed of a pond at the back of the Fairview Oil Mill ruins (near Cherrywood), and further downstream next to Moyle Park College, where the water was used by Clondalkin Paper Mills in the past. Many of the concrete ponds are now in poor condition as water levels have dropped and the ponds have silted up. The mill pond serving Leinster Paper Mills was situated on the old Nangor Road, but was covered to make way for a car park and entrance for the Mill Shopping Centre from the Nangor Road side.[2]

The Camac then flows through Clondalkin village opposite the Garda Station and down Watery Lane, flowing on towards Nangor Road, and meeting tributaries in the industrial Bluebell and Robinhood Estate areas.[2] It then travels through the Lansdowne Valley to residential Drimnagh and Crumlin.

The river goes on to Inchicore, where it is tunnelled under the Grand Canal before a bridge crossing at Golden Bridge. It runs behind Richmond Park, home to St Patrick's Athletic and gives its name to the ground's 'Camac Terrace', and comes to Kilmainham, where it runs behind the Kilmainham Gaol museum, before entering the Liffey alongside Heuston Station, a little upstream of Sean Heuston Bridge.[4] The river was culverted underneath the railway station when it was built in 1846.

The Camac receives tributaries in the Slade of Saggart, including the Ferny Glinn and the Two Slades, and later from around Newcastle, and near Clondalkin (including the Boherboy, Brownsbarn and Fettercairn Streams, the latter joining near the boundary of Corkagh Park, in which the Camac features). Lower tributaries include the Robinhood Stream (Coolfan River), Gallblack Stream (formed from the Blackditch and Gallanstown Streams), Drimnagh Castle (or Bluebell) Stream, and Walkinstown Stream.[5]