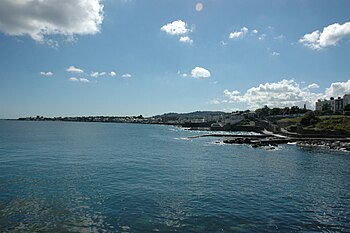 Dublin Bay is a C-shaped inlet of the Irish Sea on the east coast of Ireland, in the midst of the coast of County Dublin. The bay is about six miles wide along its north-south base, and four and half in length to its apex at the centre of the city of Dublin; stretching from Howth Head in the north to Dalkey Point in the south.

North Bull Island is situated in the northwest part of the bay, where one of two major inshore sand banks lay, and has a three-mile long sandy beach, Dollymount Strand, fronting an internationally recognised wildfowl reserve. Many of the rivers of County Dublin reach the Irish Sea at Dublin Bay: the River Liffey, with the River Dodder flow received just half a mile inland, the River Tolka, and various smaller rivers and streams.

The metropolitan area of the city of Dublin surrounds three sides of the bay (the north, west, and south), while the Irish Sea lies to the east. Dublin was founded by the Vikings at the point where they were able to ford the River Liffey with the first wattle bridge up from the estuary. The city spread from its birthplace, around what is now the James's Gate area, out along the coastline, northeast towards Howth and southeast towards Dalkey.

The bay is rather shallow with many sandbanks and rocky outcrops, and was notorious in the past for shipwrecks, especially when the wind was from the east. Until modern times, many ships and their passengers were lost along the treacherous coastline from Howth to Dun Laoghaire, half a mile from shore. Early maps of the bay carefully show narrow shipping channels and mooring areas.

The bay in its natural state had two inshore sand banks, the North Bull and the South Bull. With the building of the Bull Wall, the North Bull began to build up rapidly, forming North Bull Island (often simply "Bull Island"). A southern wall had earlier been built - the Great South Wall - but did not result in island formation, the South Bull remaining today an area of mud flats and strand. In addition there are several offshore sandbanks, notably Kish Bank (on which a lighthouse stands).

From north to south, Dublin Bay features beaches at Sutton Strand, Dollymount Strand on North Bull Island, Sandymount, Seapoint and south of Dun Laoghaire. The remaining coast is either rocky (with cliffs on Howth Head, for example) or mud coming up to sea walls. In most parts, the land slopes gently down to the sea, but aside from Howth Head, there are bluffs along much of the Raheny coastline, and the sharper slopes just inland at Monkstown and Old Dunleary.

In 1972, the Dublin Port and Docks Board proposed building an oil refinery in Dublin Bay. The plan was vigorously opposed by environmentalists on the grounds that it posed a serious risk of pollution. One protestor, Sean Loftus, a lifelong campaigner for Dublin Bay, changed his name by deed poll to "Seán Dublin Bay Loftus" when standing for election to the Dáil. Although he was not elected, he succeeded in publicising the issue and the proposal was eventually turned down by the Government. (Loftus later changed his name by deed poll to "Seán Dublin Bay Rockall Loftus" as part of a campaign to press the Irish Government to make a territorial claim to the Rockall islet in the Atlantic Ocean). Loftus also led opposition to the 2002 and subsequent applications by the Dublin Port Company to reclaim 52 acres of land in Dublin Bay. Other suggestions for the bay have included a proposal to build giant underwater gas storage tanks, and to infill the near-lagoon behind North Bull Island to form a leisure park. 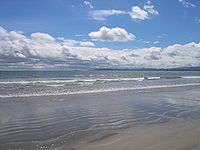 In the summer of 2010, An Bord Pleanála refused permission to the Dublin Port Company to proceed with its plans to infill a further 52 acres of Dublin Bay.[1] The proposed infill was highly controversial and was finally refused permission on the basis that the proposed development could adversely affect the integrity of the South Dublin Bay and River Tolka Estuary proposed Special Protection Area and adversely affect the natural heritage of Dublin Bay.[2]

Coastal flooding can occur at high tide at several points, notably the city side of Clontarf and Sandymount.

James Joyce set much of the action in his mamouth novel Ulysses around the bay, from the Forty Foot bathing place—in which the character Buck Mulligan washed in the morning—to Howth, where Leopold Bloom made love to his wife Molly under the rhododendrons.