Kirkstall is a north-western suburb of Leeds in the West Riding of Yorkshire, on the eastern side of the River Aire. To the west is Bramley, to the east is Headingley, and to the north are Hawksworth and West Park. The population of the ward at the 2011 Census was 21,709.[1] Kirkstall is around two miles from the city centre and is close to the University of Leeds and Leeds Metropolitan University. Its main visitor attraction is Kirkstall Abbey. Another landmark is St Stephen's Church designed by the architect Robert Dennis Chantrell. Richard Oastler, a reformer and fighter for children's rights, is buried in a crypt under the church's east end.

In the 12th century[Cistercian monks founded Kirkstall Abbey, a daughter house of Fountains Abbey, also in the West Riding. The Abbey House Museum opposite the abbey tells the story of the community and the town. Henry De Lacey, Baron of Pontefract, gave the land for the foundation of the abbey, and Kirkstall has a few roads named in his memory. The Abbey Light Railway, which connected the grounds of the abbey with the Bridge Road commercial area, was closed down in 2012.

The Kirkstall Festival is an annual event, held in the abbey grounds on the second Saturday in July since 1981. It is a festival of music, local arts and crafts, and is organised by volunteers of the KVCA (Kirkstall Valley Community Association). 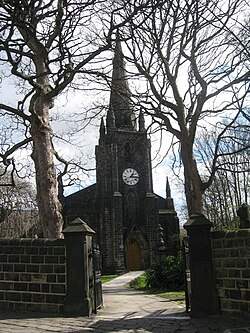 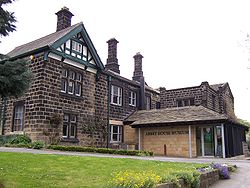 The name of Kirkstall comes from Old Norse kirkja ('church') and Old English stall ('place') and means 'site of a church'.[2]

During the Civil War, the bridge over the Aire at Kirkstall (referred to in a contemporaneous account as 'Churchstall') was destroyed by Royalist troops from Leeds. After discovering this, a Parliamentary force led by Ferdinando Fairfax, 2nd Lord Fairfax of Cameron - from Otley - had to cross the river upstream at Apperley Bridge before retaking Leeds in January 1643.[3]

Kirkstall was historically an important centre of industry. Kirkstall Forge lays claim to being the longest continually used industrial site in Britain, having been founded in the 13th century by the Cistercian monks of the abbey, and a number of printers. The earliest known activity on the site was a mediæval mill race which supplied water to power the corn mill at Kirkstall Abbey. Iron production took place at the forge from the 1580s onwards. During the late 18th century the reconstruction of the upper and lower forges allowed 'shovel and spade production' to commence. A railway was built at the forge in 1830 and sustained growth at the plant. The First World War brought about large scale growth, providing axles for military vehicles and by 1930 most lorries and buses made in the UK had a Kirkstall back axle casing. In 2002 the owners of the site, the Dana Holding Corporation announced the closure of the works, shifting production to India and Spain.[4] The site is undergoing major redevelopment, as is the old Waide's Printers & Kwik Save site. Printing has, like iron-founding, suffered a decline, several printing companies remain.

Until 1976 when it was closed, Kirkstall was dominated by a coal-fired power station.[5] It was replaced by larger power stations away from town at Ferrybridge, Eggborough and Drax. The power station was demolished in the early 1980s.[6]

Kirkstall Abbey is a ruined Cistercian monastery set in grounds which are now a public park on the north bank of the River Aire. It was founded in about 1152 and took over 75 years to construct.[7] It was closed during the Dissolution of the Monasteries under the auspices of Henry VIII.[8] The ruins have been painted by artists such as J. M. W. Turner and Thomas Girtin. 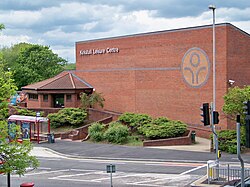 Kirkstall's amenities are stretched along Kirkstall Road and Abbey Road. There are several pubs, a Morrisons supermarket and several other shops around it on the site of the former Waddingtons factory, including Matalan, Dunnes, Boots the Chemist, Specsavers, Halfords and the Carphone Warehouse. For many years Kirkstall had a department store, Clover; this was taken over by Allders and was then run by British Home Stores. This has now been demolished and the Kirkstall Bridge Shopping complex has been built in its place. This includes Home Bargains, Pets at home, M&S food and Outlet etc... . Most of the independent shops are spread along the A65. Kirkstall has a library and leisure centre on Kirkstall Lane and a fish and chip shop on Morris Lane (Kirkstall Fisheries) which is said to be haunted with a passage in the cellar leading down to Kirkstall Abbey now blocked off. A hairdresser/Barbers shop also with a passage under the stairs leading to Kirkstall Abbey. A small shopping precinct is situated adjacent to the A65 and Kirkstall Lane has become dilapidated in recent years. The centre has an independent discount supermarket, a private members' club and a bookmakers. The post office, the library and a public house have closed.

Kirkstall is situated on the A65 road which links it to Leeds city centre, Guiseley, Yeadon and Ilkley. This is crossed in the town centre by the B6157 road between Stanningley and Moortown. The latter crosses the river Aire on the Grade-II-listed Kirkstall Bridge.

There are two railway lines: The Bradford line passes along the Aire Valley and has a railway station at Kirkstall Forge which opened in June 2016. The Harrogate line passes near Kirkstall and Headingley station is a few minutes' walk from the centre of Kirkstall. The former Leeds tramway ran through Kirkstall until it was dismantled in 1959, a substation used by the tramway is still visible on Abbey Road. There are many bus routes through Kirkstall. The Leeds and Liverpool Canal also passes through Kirkstall close to the river and its tow path provides walking, running and cycling routes to Leeds and also west to Rodley and Shipley. 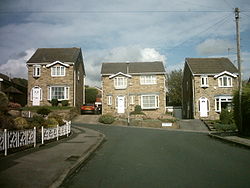 Abbeydale Oval. The house on the far left was extensively used in filming The Beiderbecke Affair. 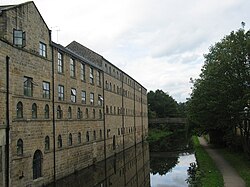 The Kirkstall Brewery site was converted into a large hall of residence for students of Leeds Metropolitan University. Other developments in Kirkstall include the Morrisons shopping complex, off the A65 road, by the river.

Filming of The Beiderbecke Affair took place partly in Kirkstall, using houses around Abbeydale Oval with other scenes shot throughout the area and Moor Grange.

The Kirkstall Festival takes place every year in the grounds of the abbey.[9]

Equidistant from London and Edinburg (sic)

Kirkstall is rich in historic sites and monuments. St. Stephen's churchyard has fine 19th century grave markers. Other landmarks include an elegant early-19th-century stone monument on the A65 road near the Kirkstall Forge site. A plaque on the monument indicates that Kirkstall is 200 miles from London and 200 miles from Edinburgh.

The re-located 19th-century drinking fountain near the demolished police station at the junction of Abbey Road and Bradford Road proclaims 'Drink and be Grateful'. The fountain's little garden had been neglected for many a year until local community gardening group Kirkstall-in-Bloom made it their initial project in 2012.[10]