Hensall is a village and civil parish in the West Riding of Yorkshire, three-and-a-half miles north-west of Snaith. It originates as a township of the ancient parish of Snaith.

Hensall can trace its roots back at least as far as the 1086 Domesday Book, in which it is listed as Edeshall.

The largest building in the village is the Anglican St Paul's Church, which was commissioned by the Viscount Downe in 1843. The building is almost identical to the Holy Trinity Church located in East Cowick, just over five miles east of the village. St Paul's Church was consecrated in 1854.

For most of its history the people of Hensall were employed in agricultural industries, with some cottage industries also present. Today the village is largely a dormitory settlement, with inhabitants commuting to nearby towns and cities for work; however, there are a number of light industries based in Hensall.

The village of Hensall is located just south of the River Aire, and lies in an area known as the Humberhead Levels. The Levels cover a large area, and are characterised by flat, low-lying land, formed at the end of the Ice Age.

Due to its proximity to a river, and the flat land it occupies, Hensall has long been suited to arable farming. Having once been home to several farms there are just two in the village today, and though some livestock is kept, crops are the main agricultural output.

Hensall lies on rich sand deposits, which have in the past been quarried. As a result of the quarrying a number of former quarries puncture the otherwise flat landscape. In recent years these have become important habitats for wildlife.

During the Autumn 2000 UK Floods the village was affected by flooding from the River Aire, though was spared the worst of the flooding that affected the neighbouring village of Gowdall, two miles away. Following the flooding in 2000 flood defences in the area were dramatically improved, and defended the village when they were put to their first major test; during flooding over the winter of 2015. 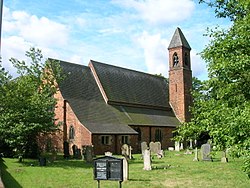 Hensall is a detached village; as well as the principal settlement, built around Main Street, there are also three outlying parts to the community.

As the name would suggest, Main Street is the principal thoroughfare of Hensall. With Field Lane and Finkle Street, Main Street forms a loop that comprises the core of the village. The area contains a number of the village's amenities including the Post Office (which also acts as the village store), the Methodist Church and the local Italian restaurant; La Anchor. Several other residential streets are connected to this part of the village. One of these streets, Bird Lane, leads to a sports field, home of Hensall's cricket and football clubs. Adjacent to the cricket pavilion is one of the village's two playgrounds.

Main Street becomes Wand Lane as it exits the core part of Hensall to the north-west. About a quarter of a mile along the route is Dene Close, a collection of post-war homes, built in the 1950s.

Half a mile west along Weeland Road from the Station Road crossroads is a small collection of homes in an area known as Eggborough Ings. The homes in this area connect with Wand Lane to the north, and the core part of the village, via Hazel Old Lane. 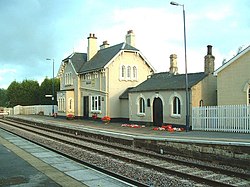 By road Hensall lies on the A645, which is known as Weeland Road in the village. The A645 connects with the A19 a mile west of Hensall, providing connections to Selby and York to the north, and Doncaster to the south. The A19 connects with Junction 34 of the M62 just south-west of the village, providing good connections to Goole and Kingston upon Hull to the east, and Leeds, Pontefract and Wakefield to the west.

By rail Hensall is located on the Pontefract Line of the West Yorkshire Metro. From Monday to Saturday the village is served by three trains a day, with one train terminating in Goole, and two trains terminating in Leeds. The East Coast Main Line (that connects Edinburgh to London) passes Hensall just a quarter of a mile east of the village, though the nearest stations to Hensall on that line are at Doncaster, which is sixteen miles south of the village, and Yorkk, twenty one miles to the north.

By bus Hensall has a limited service. There are a number of bus stops placed in the village along a route that goes from Selby to Wakefield and back, between Monday and Saturday.

For a village of its size Hensall is served by a relatively good number of community amenities and services.

La Anchor, an Italian restaurant, popular with both villagers and people from further afield, can be found on Main Street. There is also a village pub; the Railway Tavern. Hensall is also served by a Post Office, which doubles as the village store.

The flat landscape and numerous country lanes around Hensall lend themselves to cycling, there are also a number of public footpaths around the village. Hensall is home to both a cricket club and a football club.

The Anglican St Paul's Church, and a Methodist church can both be found in the village

On 20 January 2015 Hensall was featured on the popular BBC television show Great British Railway Journeys. The programme is presented by former MP Michael Portillo. During an episode titled "Boston to Hensall", during the show's sixth season, Portillo boarded a Goole-bound train at Knottingley Station and travelled on one of the least-used passenger railway routes in the country; on one of the so-called "Parliamentary Trains". While in Hensall Portillo took a ride through the village on a road going steam engine.

In 1851 two Hensall villagers, brothers George and James Petty, founded the community of Hensall in the Canadian province of Ontario. The settlement is located roughly nine miles east of the shore of the Lake Huron, one of theGreat Lakes, in Huron County.