Reddish is a suburban area of south-east Lancashire, adjacent to the border with Cheshire. It is two miles north of Stockport in the latter county and four and a half miles south-east of Manchester in the former. The population is 30,055 in an area of 2¾ sq. miles.[1] By the UK Census 2011 the population of both wards (north and south) decreased to a combined total of 28,052.[2][3] Reddish grew and developed rapidly during the Industrial Revolution and still retains landmarks from that period, such as Houldsworth Mill, a former textile mill.

Reddish Vale is a country park close to the locality.

The neigh'ring trench is called the Nicker Ditch
Flowing with blood, it did the name convey
To th' bordering hamlet, Red-Ditch. Near here, Where
the last 'tween the foes was fought,
Where victory was won, that memorable
Eminence proudly was distinguished
By the name of Winning Hill. The streamlet
Aforemention'd gains appellation
Of Gore Brook, also the contiguous
Happy hamlet through which it floweth still
Bears, in glorious commemoration,
And e'er shall, the honour'd name of Gore Town.

Farrer and Brownbill dismiss this interpretation as "popular fancy".[12] 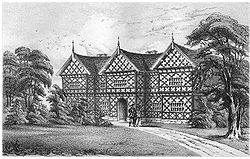 Reddish does not appear in the Domesday survey; this is in common with most of the south-east Lancashire area.[13] A corn mill is known to have existed at the junction of Denton Brook and the River Tame from about 1400 onwards.[14] The two main mediæval houses were Reddish Hall at SJ899932 (demolished 1780,[4] but visible on maps dated 1840) and Hulme Hall at SJ889926, later known as Broadstone, then Broadstone Hall (demolished 1945[15]). The Reddish family were major landowners in the area from at least 1212 to 1613 when title passed by marriage to the Coke family. It passed down the family to Thomas Coke, 1st Earl of Leicester, who sold his land in Reddish at the end of the 18th century, and in 1808 it was bought by Robert Hyde Greg and John Greg.[4] There were Hulmes in Reddish in the 13th century, and the land passed through the family until about 1700 when it was given to a charitable trust.[4]

Very few buildings in Reddish pre-date the 19th century. Canal Bridge Farm, close to Broadstone Mill, is dated to the mid to late 18th century (the name is later).[16] Hartwell dates a small group of farm buildings and cottages at Shores Fold, near the junction of Nelstrop Road and Marbury Road, to the sixteenth and late seventeenth to early 18th century. These would have been on the traditional Reddish – Heaton Norris border, but are now firmly inside Heaton Chapel.[17]

The Stockport Branch Canal passed through Reddish and opened in 1797. It seems to have had little effect by 1825, when Corry's description of Reddish, in full, was "The population of Reddish is but thin".[18] Booker states that in 1857 Reddish was almost entirely agricultural, being made of meadow and pasture (1,320 acres); arable land (90 acres); wood and water (50 acres); and buildings and streets (44 acres). At that time, Reddish contained "neither post-office, schoolmaster, lawyer, doctor, nor pawnshop".[19] The population increased over tenfold in the next fifty years with the Industrial Revolution.

The water-powered calico printworks in Reddish Vale on the River Tame is known to have been working before 1800. Industrial development followed the line of the canal[20] and was steam-powered throughout. A variety of manufacturers moved into Reddish during this period.

Robert Hyde Greg and John Greg, sons of Samuel Greg of Quarry Bank Mill, who owned about a third of Reddish by 1857,[21] opened Albert Mills for cotton spinning in 1845. Moor Mill, manufacturing knitting machines, was built around the same time. William Houldsworth's Reddish Mill for cotton spinning was opened in 1864. Hanover Mill was built in 1865 for cotton spinning, but in 1889 was converted to make silk, velvet, woven fur etc.

A small number of closures of major industrial employers took place in the first half of the 20th century, due to the ebb and flow of trade. Andrew's Gas Engine Works was taken over in 1905 by Richard Hornsby & Sons of Grantham,[26][27] the business was transferred to Grantham and the Reddish works closed some time during the great depression following World War I.[27] Cronin indicates that the works were still in operation in 1930.[28] The Atlas wire rope works closed in 1927.[29]

The decline of Broadstone Mills was accompanied by high farce. In November 1958 the company sold a number of spinning mules as scrap for just over £3,000. By agreement, the machines remained in the mill over the winter. A small number had been broken and removed by April 1959, when the government announced a compensation package for firms that agreed to scrap spinning capacity. As the title in the mules had passed to the scrapman, it was decided that the company was not entitled to compensation amounting to over £60,000, despite the fact that the machinery was still on its premises. Actions in the High Court and the Court of Appeal in 1965 were fruitless.[36][37]

Some of the mills vacated by the spinners found other uses. The Reddish Spinning Company's mill was taken over by V. & E. Friedland who became the world's largest manufacture of doorbells; an extension to the mill won several architectural awards.[38] The mill is now residential. Broadstone Mill was partly demolished, but now houses small commercial units.[39] Regeneration efforts at Houldsworth Mill were instrumental in Stockport Council winning British Urban Regeneration Association's award for best practice in regeneration.[40] £12 million has been spent to convert the mill into mixed use.[41] The area around Houldsworth mill is now designated as a conservation area.[42][43]

"Mere" means boundary in this context. The description was traced into early 20th century features by Crofton[45][46] and can be cast as

However, Black Brook cannot be le Merebroke as it does not flow to the Tame, but joins Cringle Brook, which flows into the Mersey several miles away via Chorlton Brook. With this exception, Crofton's interpretation of the 1322 boundaries matches those shown on Ordnance Survey maps of the 19th century. 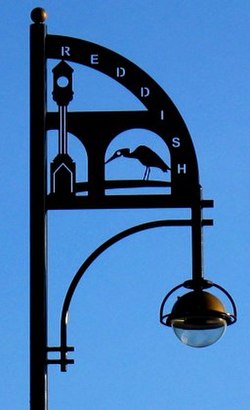 A lamp standard near Houldsworth square. It pictures the herons commonly seen in Reddish Vale, the railway viaduct, and the clock monument to Sir William Houldsworth

Reddish is home to several listed buildings and structures.[47] All the Grade I and Grade II* listings are part of Houldsworth's community. 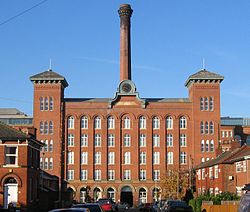 The B6167 is the main road through Reddish. It allows access to the A57 for Manchester or the M60/M67 junction at the north, and to Stockport and the M60 to the south. Buses run from Stockport via Reddish and Gorton to Manchester city centre. Less-frequent services run to Ashton via Gorton & Droylsden, Ashton via Denton, Manchester via Didsbury and Rusholme, Hazel Grove, and Wythenshawe.[49] Trains from Reddish North station run to Manchester Piccadilly and New Mills, with some trains continuing to Sheffield. Reddish South station does not provide a significant service. A few dedicated cycle routes cross the area.

The Ashton Canal and the Stockport Branch Canal were built to join Manchester and Stockport to the coal mines in Oldham and Ashton-under-Lyne. The branch was dependent on the main for its utility, and hence its planning, passing through parliament, and construction came after that of the main. The main opened in 1796 and the branch in 1796. The branch was just under five miles (8 km) long, and left the Ashton Canal at Clayton, passed through Gorton and Reddish, and terminated just over the boundary in Heaton Norris, adjacent to what was then the main turnpike between Manchester and Stockport. The Beat Bank Branch Canal was planned as a sub-branch and was intended to cross Reddish Vale to a colliery at Denton, but the scheme was abandoned by 1798.[50][51] By 1827, the canal was bringing coal to Stockport from as far as Norbury and Poynton.[52]

The road currently designated the B6167 (Sandy Lane, Reddish Road, Gorton Road, and Reddish Lane) was turnpiked by the Manchester, Denton and Stockport Trust following an Act of 1818.[51][54]

The history of the development of rail infrastructure in the UK is complicated, with lines and stations being built by a myriad of railway companies and joint ventures. Routes did not always follow the best path, but were created, altered, or blocked through lobbying of parliament by interested parties intent on protecting their interests and preventing competition. Due to their strategic position between Manchester and London, Stockport and Reddish played their parts. Reddish played host to three railway lines, two railway stations, and a traction depot. To improve readability, the names of the stations and lines are the latest (or last) used.

The West Coast Main Line running between Manchester Piccadilly and London via Crewe was opened in 1840-2 by the Manchester and Birmingham Railway (M&B), crossing the Mersey valley on a large viaduct at Stockport. In 1849 a line was opened from the north side of the viaduct via Reddish South and Denton stations to join the Woodhead Line (Piccadilly to Sheffield) of the Sheffield, Ashton-Under-Lyne and Manchester Railway (SA&MR) at Guide Bridge. A short branch went to Denton Colliery. The station at Reddish South contained a large goods yard, and trade through the station played an important role, alongside the canal, in the industrialisation of the area.[55]

The M&B became part of the London and North Western Railway (LNWR) by 1849: the SA&MR became part of the Manchester, Sheffield and Lincolnshire Railway (MS&L) in 1847. At this stage both companies used Piccadilly as their Manchester terminus. The LNWR held a monopoly on the important London route.[55]

In 1862 the MS&L built a line from Hyde Junction to near Compstall on the River Goyt. In 1865 this was extended over the river to New Mills, and later joined the Midland Railway's Derbyshire lines. By 1867 Midland trains were running from London to Piccadilly via this (considerably longer) route, providing competition to the LNWR. In 1875 the Sheffield and Midland Railway Companies' Committee, a joint venture between the MS&L and the Midland, opened a new more direct route from near Romiley to Piccadilly, and gave Reddish its second station, Reddish North.[55]

Of the 1907 facilities provided by Stockport, only the library is still open, though under threat of closure.[56] The baths closed in 2005; there is a campaign to reopen them,[57] but it does not have the backing of the council.[58] The ground floor of the fire station is used as a community centre. The mortuary closed in the 1980s.[15]