Droylsden is a town in Lancashire, four miles to the east of Manchester city centre and two miles west of Ashton-under-Lyne, with a population of 23,172. This had decreased slightly at the 2011 Census.

In the mid-19th century Droylsden grew as a mill town on the Ashton and Peak Forest canals. Beginning in the early 1930s, Droylsden's population expanded rapidly as it became a housing overflow area for neighbouring Manchester.

Since 1785, the Fairfield area of Droylsden has been home to a Moravian Church. 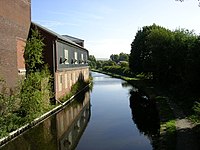 The Ashton Canal through Droylsden

Droylsden was settled around AD 900. In former days, the area was popularly referred to by Mancunians as "The Silly Country".[1] One suggestion as to the source of that nickname is that once a year, some of the townsfolk used to watch an annual carnival by bringing a pig and sitting it on a wall to watch the passing entertainment with them. The Pig on the Wall public house, converted from a farm in 1978, takes its name from that story.

The first machine woven towel in the world – the terry towel – was produced by W. M. Christy and Sons of Fairfield Mills, in Droylsden, in 1851. William Miller Christy's son, Henry Christy, had brought back a looped towel from Turkey in the 1840s, which Christy's managed to copy on an adapted loom. Their Royal Turkish towels became famous, with Queen Victoria having a regular order. The mill closed at the end of the 1980s, and in 1997 Tesco opened a supermarket on the site.

Droylsden Marina has 92 three and four-bedroom houses, and 291 one and two-bedroom apartments as well as waterside offices, restaurants, and shops.[2]

The Droylsden Little Theatre has been running amateur productions since 1931.[3] 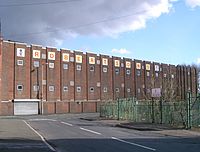 During the 1930s, Droylsden's population expanded rapidly, as it became a housing overflow area for Manchester. Today the area is predominately occupied by employed home owners.

Robertson's Jam was a significant employer in the area. The factory was established in 1891, on the banks of the Ashton Canal, on Ashton Hill Lane. At its peak it employed around 1,000 workers; that number was reduced to around 400 before closing during 2008. The factory was demolished during the early part of 2010.

Droylsden is one of a number of locations which are promoted as the birthplace of speedway racing in the United Kingdom. Britain's first ever Speedway meeting was staged in Droylsden on 25 June 1927, billed as dirt track racing.

The Copperas Fields off Juniper Crescent cover 16 acres and have been enrolled as a Queen Elizabeth II Field.